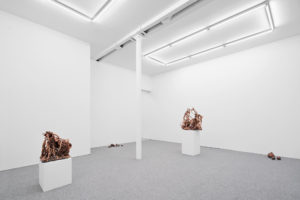 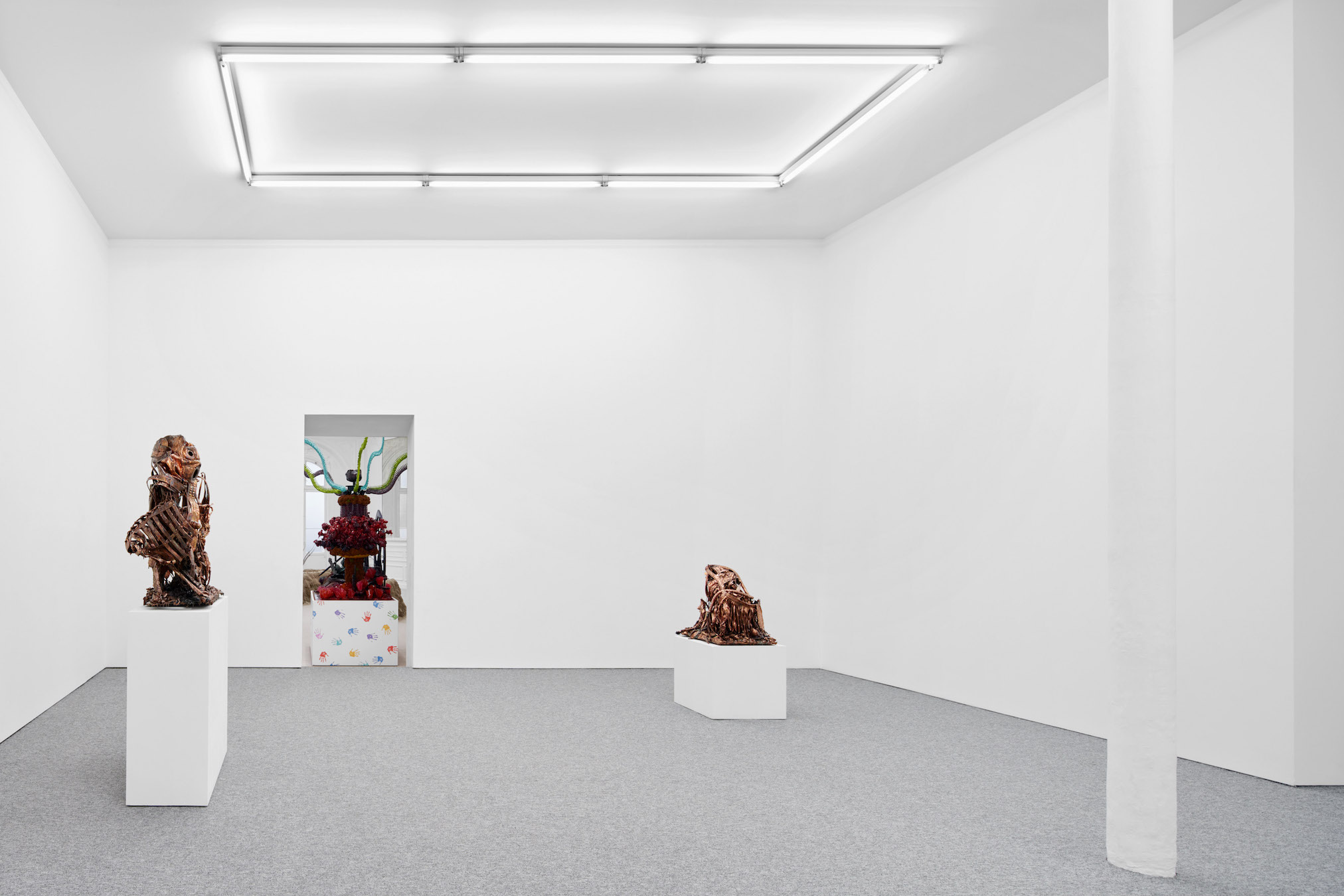 Damaged by Miracles evokes a story of time, memory, and loss, presenting a series of fragmented dreamscapes whose times and places intersect, hovering in a transitional perimortal state, evocative of both loss and resurrection. The story told by these hallucinatory cosmoi oscillates between two familiar reflections on death and decay.

The first is Walter Benjamin’s analysis of Paul Klee’s Angelus Novus, the angel of History. What the angel sees when looking backward is a pile of rubble: death, destruction, ruins, failure. History is a graveyard.

The second is that of Russian cosmist, Nikolai Fedorov: death is a mistake, a flaw in the design of nature. But because death is simply an alteration of a material state, rather than an end or conclusion, humans can develop strategies for material preservation: the graveyard becomes a field of miraculous potential: a chthonic garden of aluminum machines blossoming out of crocodilian fossils from the Eocene; a catalogue of copper entombments; a rococo chamber housing a heterogeneity of traumatized cultural artifacts; an office crypt containing a holobiont comprised of a chrome invertebrate, buttresses of dank, glossy kelp and estuarine detritus. Nothing remains still, silent, or as it seems. 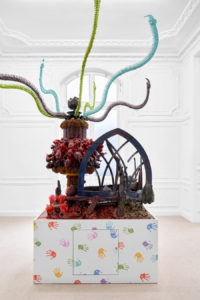 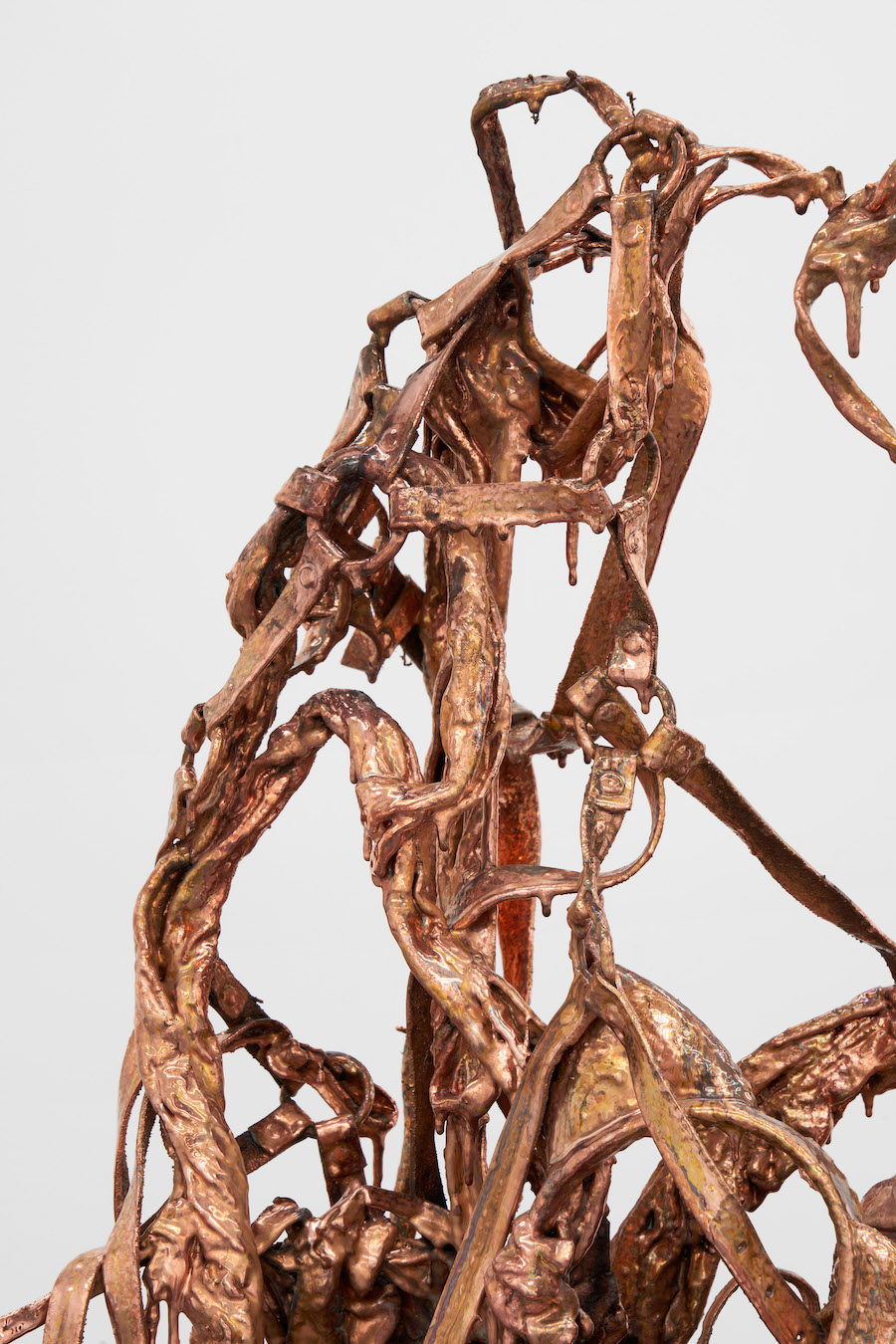 In previous exhibits the concept of the Trans-Habitat and the aesthetics of succession were foregrounded. In the present exhibit this conceptual framework is retained. What is offered, however, is a different prism for viewing the transformative onslaught, one that is sharply focused on the transitional state of perimortum and is cognizant of the conflicting sensations elicited by the simultaneity of presence and absence: that of loss but also the promise of a return. We keep Fedorov’s insistence that nothing is destroyed—molecules, flesh, machines come apart and recombine in different form, our beloved becomes fodder for another life. Nonetheless we recognize, as we stand with Benjamin in the graveyard, that this knowledge does not console: we want to hold on: to preserve rather than let go; to exist in the reality of eternal perimortum.

Memory is not a reliable agent of preservation: it is sly and as transient as time and, while it may erupt randomly, it is not available to resuscitate the dead at will. Materials, on the other hand, in their strong physicality, have had a strategic role to play in the safeguarding of what has been lost: tombstones, shrines, memorials, museums, ruins, bones and ashes, a lock of hair, an unwashed garment, bodies preserved by cryogenesis and mumification, taxidermy and formaldehyde—and historically works of art—appear to preserve what was, kindling the hope for the longed-for reunion. But this possibility is instantaneously destroyed by the same materials that in their damaged, fragmented state force the recognition that what was now exists as remains. There will be many second comings but not the one desired. 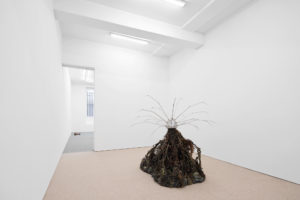 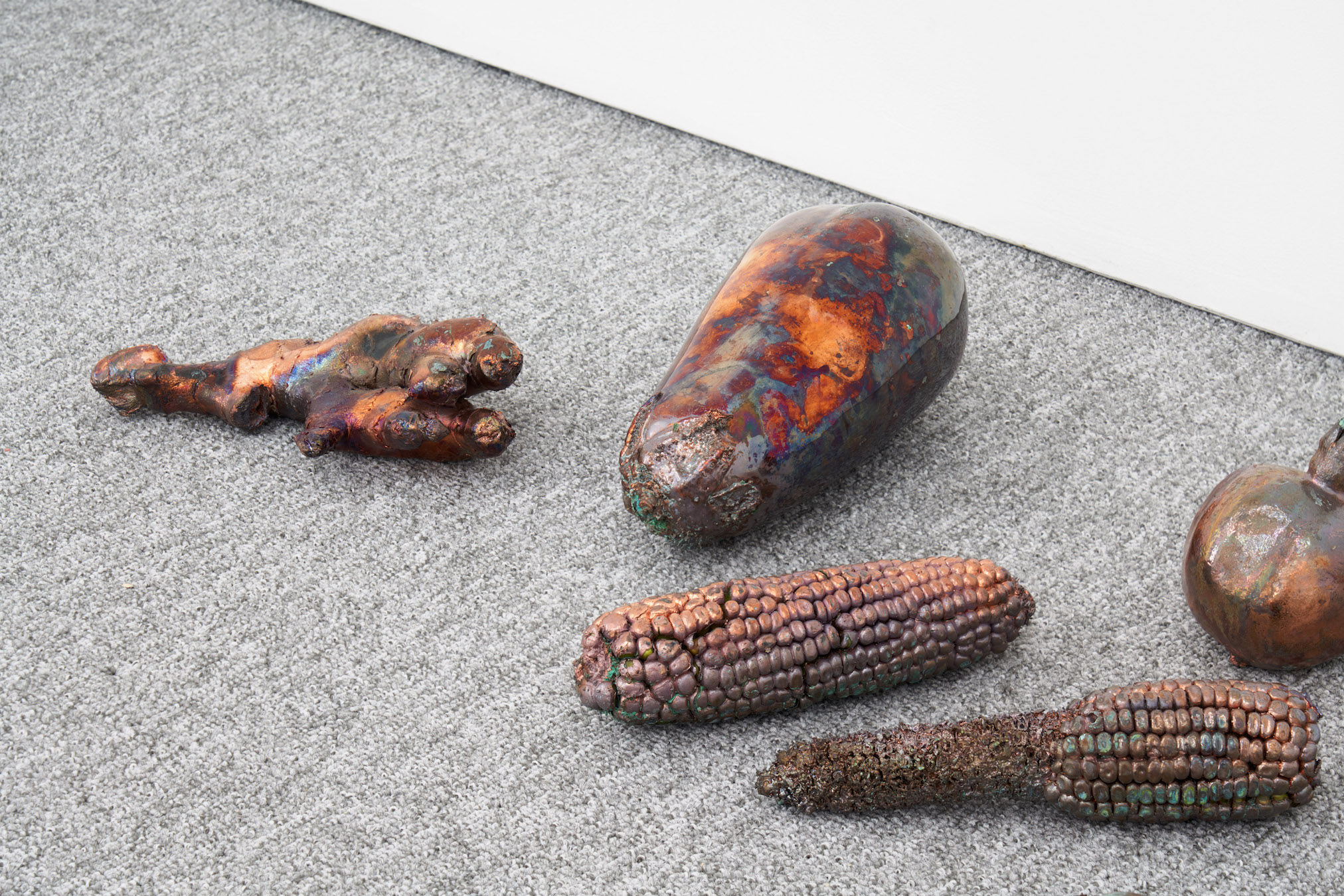 The tension between acknowledgement and denial, between Benjamin’s graveyard and Fedorov’s resurrection, is concretized in the works exhibited in the gallery’s four rooms. Each dreamscape explores, though the use of materials that have been subjected to the damages of time—rot, decay, fragmentation, fossilization, mechanization, changes in odor and color—the contradictions involved in confronting death and loss. Their kinetic, machinic aspects, existing in contrast with the apparently dead elements of the sculptures, are suggestive of perimortal dynamism. As appropriate for the age of crisis and pandemics, the works are melancholic, intended to evoke both the joy of what was, is still there, but also the pain and sadness of what is no more and will never be again: the miracles, damaged, have become corpses that will live again if not as you wish. 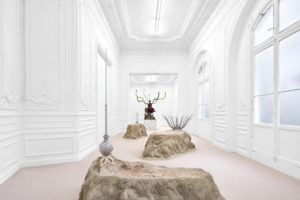 CREDITS: All images are Courtesy of the artist and High Art, Paris / Arles