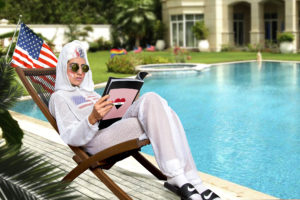 Meriem Bennani has been developing a shape-shifting practice of films, installations and immersive environments, interlacing references to globalized popular culture (music, reality TV, fashion) with the vernacular and traditional representation of her native Moroccan culture and visual aesthetics that she captures with her iPhone. Composed with awry humor and a subtle agility to misappropriate the clichés of Middle-Eastern culture, her work questions our contemporary society and its fractured identities, gender issues and ubiquitous dominance of digital technologies.

There seems to be a distinctive attention to misappropriation and détournement of architecture and everyday objects in Meriem Bennani’s installations, unveiling as a persistent gesture of distance and self-derision. 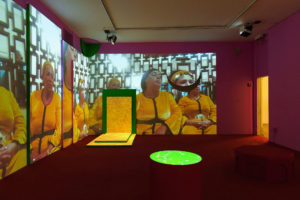 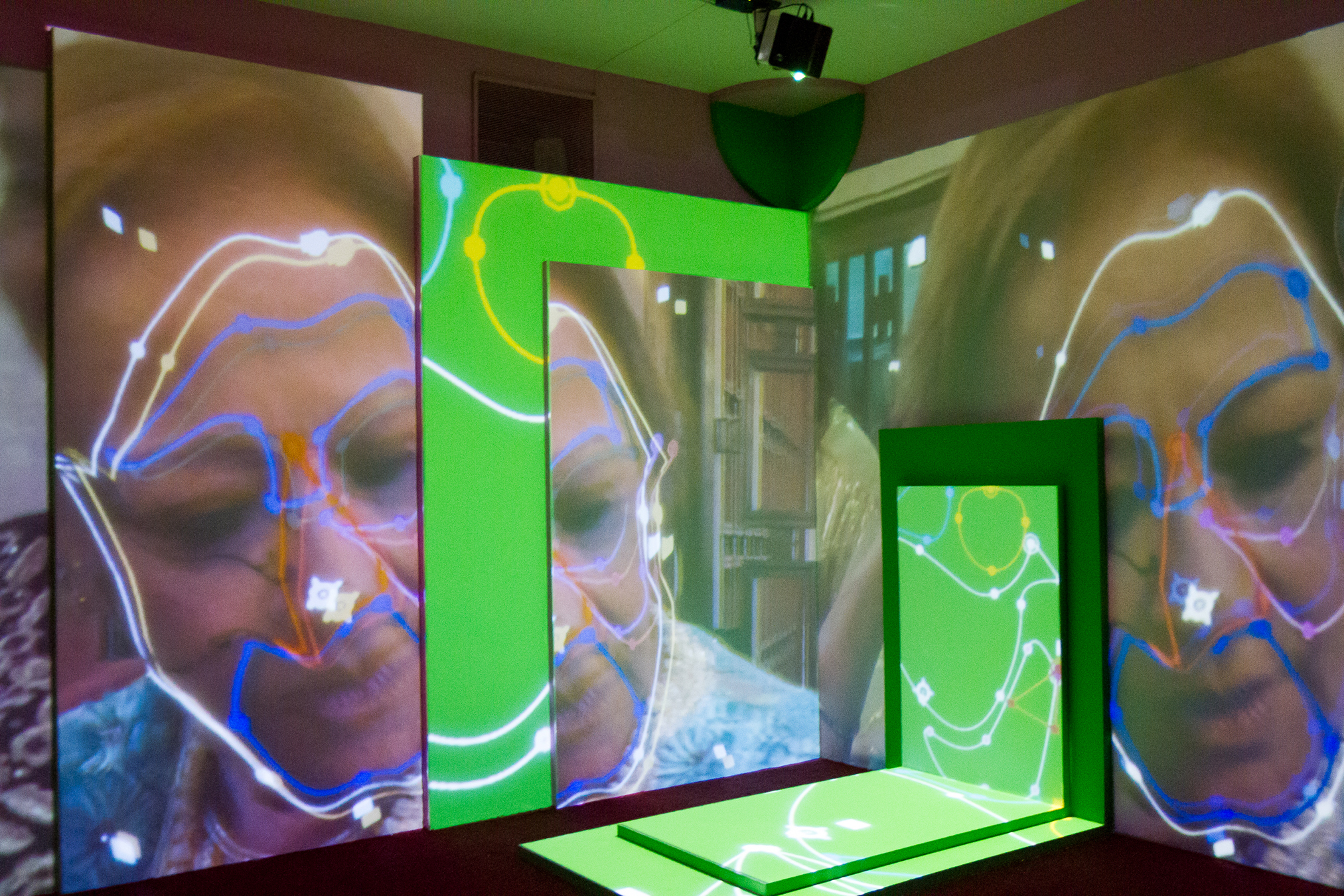 Whether she disposes low couches of red velvet for her installation FLY presented last year at MoMA PS1, or whether she creates psychedelic domestic objects, such as hair perms helmets and massage chairs made of vivid apple green and strawberry pink, as for her commission at this year’s edition of Art Dubai, her works are reminiscent of Northern African interiors or beauty salons, amusement parks or malls in the Gulf. Indeed, Bennani excels at subtly pointing out the tension between the vernacular traditional representations of Northern African and Middle Eastern culture and the visual aesthetics of a globalized one. In 2015, she produced the first two episodes of Fardaous Funjab, a reality TV show introducing Fardaous, a fake Moroccan fashion designer of “funjabs” (fun hijabs), whose delirious and absurdist creations propose to Muslim women headscarves with lipstick pockets or tennis balls baskets. There, Bennani ingeniously transforms a sometimes-controversial religious attribute into a fashion pop accessory.

Familial and female spheres lay at the center of Meriem Bennani’s practice and as a strong element of her visual language since the female characters of her family are featured in most of her video pieces. In Fardaous Funjab the role of the hijab designer is played by her mother. In FLY, she captures her grandma and aunt at a family wedding. The in-situ installation Ghariba, presented at Art Dubai, stages four video portraits depicting women from her family. In Arabic Ghariba means ‘stranger’ in the feminine form, and Bennani seems to reflect here on the representation of Moroccan women, often considered as the Westerners of the Arab world (Gharb can also mean ‘West’ in Arabic). In that sense she observes these Westerners from the East through her now Western eyes as an expatriate in the United States. In her 1991 infamous essay Stranger To Ourselves, philosopher Julia Kristeva developed a reflection on identity through the notion of the stranger—the foreigner, the outsider, or the alien in a country and society not their own—as well as the notion of strangeness within the self, as distinct from outside appearance and their conscious idea of the self. Meriem Bennani’s approach bears a deep and sensitive understanding of identity issues, while distancing herself from any stereotypical discourse on immigration or the Arab world. On the contrary, she operates a certain form of disorientalism, or a deconstruction of the orientalist clichés that might very likely be expected from her practice as an Arab female artist. Bennani belongs in fact to a younger generation of artists from the Middle East who privilege humor over struggle, irony over lament, and convey a certain form of digital cosmopolitanism.

Indeed new technologies and the virtual world are at stake in Meriem Bennani’s ensemble of works. As a millennial, she came of age with the internet, today she waves her smartphone to post teasers on Instagram and to film her surroundings when she visits Morocco, in an almost encyclopedic way—family members and strangers on the streets, private spaces and public places, everyday life and iconic historical spots. In the installation Gradual Kingdom (2016), presented at Signal in Brooklyn and at Fahrenheit in Los Angeles, the viewer discovers the street life of Rabat, markets and beaches, public squares and bakeries, the doctor’s office and the family’s car. It is a tender look on the everyday of Bennani’s hometown, and perhaps as well the amused observations of a slightly bored teenager. Furthermore, she keeps capturing with her phone other people capturing other scenes with their own phones or tablets, creating, like in FLY, a subtle and modern mise-en-abyme. What makes Bennani’s videos so witty and comical is in fact the post-production she adds to her footage while editing: goofy special effects for image or sound, emojis or basic Photoshop add-ons only reinforce this first impression of distance and humor. 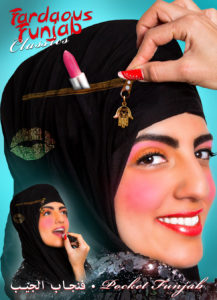 The use of popular culture, and particularly music and dance, is a fundamental element of Bennani’s practice. Middle-Eastern music undoubtedly plays an important role, like in the animation iButt, where an apple-shaped butt shakes to the sound of belly dance drums, or Lebanese pop singer Haifa Wehbe’s hit Leik El Wawa in Fardaous Funjab. Western pop music is also recurrent in her video works, but rarely in its original version. In FLY, Rihanna’s Kiss It Better is distorted by a singing fly wandering through the streets of Rabat, and the soundtrack of Gradual Kingdom includes a slowed-down version of Mariah Carey’s Vision of Love and a karaoke version of Justin Bieber’s U Smile. Finally, a memorable scene of FLY features three wedding dancers or sheikhas (sort of Moroccan geishas) joyfully rolling on the floor, but Bennani replaced the original traditional wedding music with Philipp Glass’ The Grid, a part of his score for the movie Koyaanisqatsi. Television seems to have also found its place in Bennani’s range of references. Fardaous Funjab has in fact been conceived after the artist watched the first season of Keeping Up With the Kardashians, but setting it up in the family villa of the suburbs of her native city. Beyond music, dance and TV, Bennani has also proved an interest for fashion, notably through the collaborative brand JNOUN, which she has developed with her sister, producing contemporary street-wear made with prints inspired by Arabic letters or urban aesthetics found in the technology souk in Rabat, a place where globalized products meet traditional shops.

If Meriem Bennani appears as one of the most fascinating artists from her generation, it is precisely because of her ability to deconstruct the dichotomies between what we expect from the East and the West, from the public and the domestic, and to disclose the complexities of cultural productions, artistic disciplines and plural identities. In a globalized world increasingly preoccupied with identity politics, and in an art community often divided by them, there is, in Bennani’s extensive and generous approach, the endless hope or perhaps the insane utopia that what we have in common can defeat what divides us.

Published on CURA.25
CREDITS:
All images Courtesy: the artist