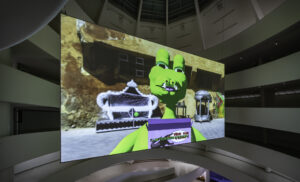 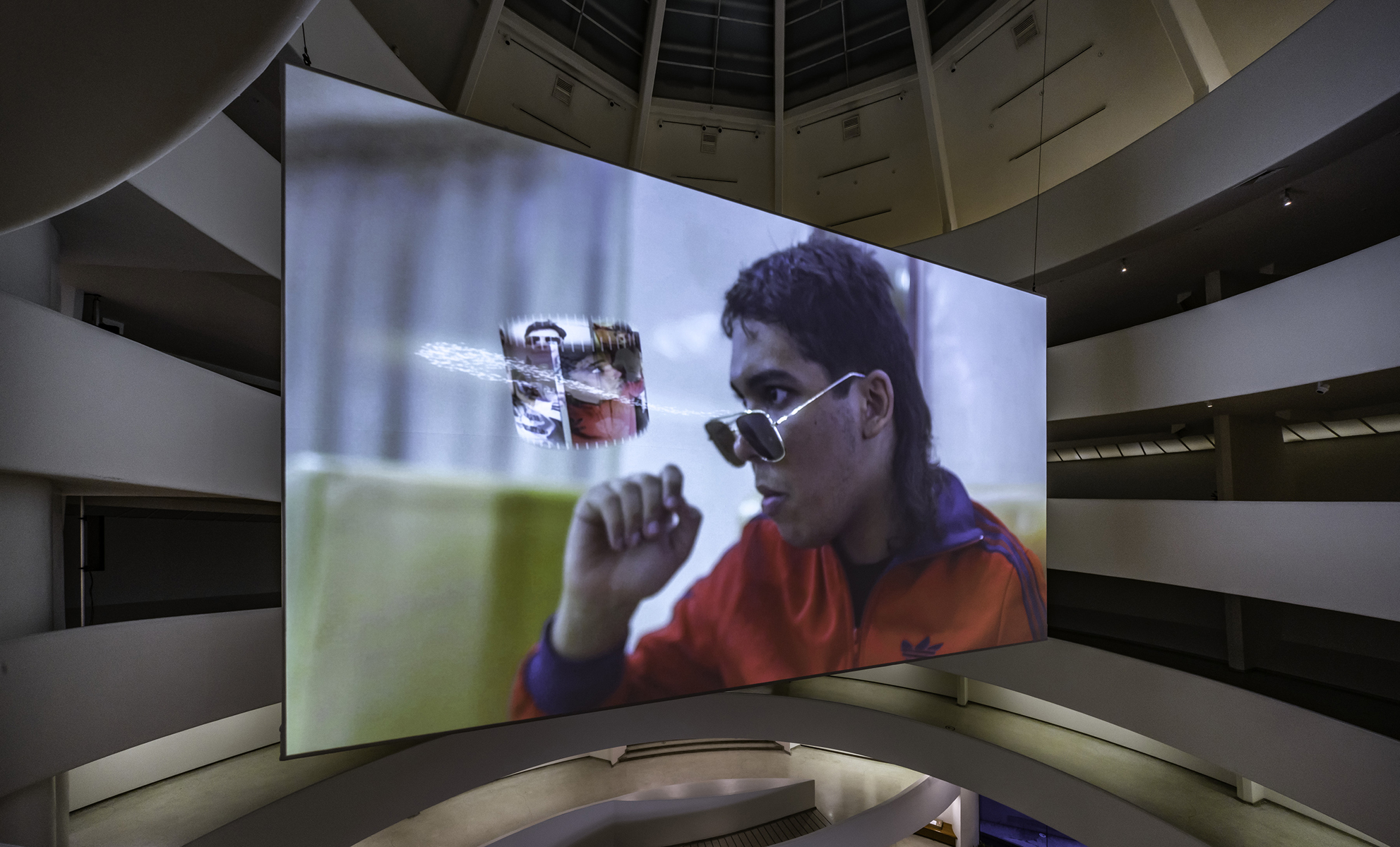 There were these two lizards that helped us sort through our feelings when COVID-19 lockdown started in New York City. In March 2020, as businesses shuttered and sirens filled empty streets, the emotional contours of the situation were an overwhelming jumble: grief and loss, anxiety and fear, and (for some) intense boredom and confinement. During those weeks, Meriem Bennani posted videos to her Instagram (made with Orian Barki) depicting two animated lizards’ experience of lockdown. The 2 Lizards videos captured those intense feelings while showing how they could coexist alongside a sense of absurdity, community, and even joy.

Lockdown was a real-time social experiment, a collective shift to a primarily networked everyday life amid a mounting public health crisis, and we were all improvising ways to behave during this period. Against this backdrop, the 2 Lizards videos served as a kind of framing device. I imagine Bennani may be tired of talking about these works, as they’ve already received intense interest, but their structure suggests some ways of thinking about her ongoing series Life on the CAPS. Begun in 2018, the series now comprises three videos that are all speculative social experiments in their own way, combining live-action improvisational scenarios with animated narrative frames.

The CAPS is a fictional future island in the middle of the Atlantic that is used by US troopers as an offshore detention center for migrants crossing via teleportation. When migrants are intercepted in transit, they rematerialize on the CAPS; some turn up with errors, such as plastic faces, and some purchase entirely new corporeal forms. Despite the repressive political situation, the CAPS has a vibrant music culture, wild bacchanals, hackers who siphon data from the Troopers’ perverse internet usage, an active political resistance, and technologies that allow them to swap bodies and browse media in front of their eyes. 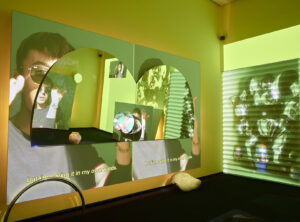 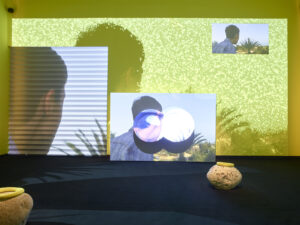 For the live-action elements of each of the three videos, Bennani worked with different groups of untrained actors, to whom she gave a relatively open prompt each time. For the first video, the prompt was simply to celebrate a birthday party in the world of the CAPS, and for the second, it was to train for an uprising against the Troopers who control the CAPS. The third video, Life on the CAPS, involved the most elaborate prompt. For this work, Bennani aimed to explore a longstanding and unanswerable question: is symbolic or direct action more politically effective? Bennani cast two young men as main characters—one played the father, who had purchased a new, younger body, and the other played his son—and worked with a group of young people who have learned traditional music that involves hand-clapping.

When the live-action sequences are produced, most of the story is not in place. It only emerges in post-production, when Bennani draws out a story from the footage, adds narration and animated elements, as well as found footage. In the case of Life on the CAPS, this included an introductory sequence in which we are told the story of Bouchra, a Capsi who suffered from plastic face syndrome. Bouchra fell in love with a Trooper, and he contracted the disease from her. As soon as a Trooper was infected, a cure was quickly developed. The theme of the inequity between Troopers and Capsis is further underlined by animated ads for the Troopers’ cars, showing off high-tech designs while offering “low” monthly fees.

Early in the video, the two main characters sit outside an empty car dealership as dusk gathers, having an argument. One is there only out of cultural interest; a musician, he wants to come to check out the cars, which he heard “have a sick horn sound.” The other is there to help plan a political action: “Why are we doing this protest? They spend money on fancy cars… meanwhile just to go to the store I need my blades.” The camera tilts down at this point to reveal roller blades on his feet. In another scene, the rebels (who call themselves Crocos) gather to discuss their protest. One says “I want to go peacefully;” the father character retorts, “’you have people coming to beat the shit out of you and you carry a little drum?”

Bennani allows these scenarios to play out in a relatively open-ended way. As with 2 Lizards, she observes an unfolding social situation, and offers a framing device for it. As with 2 Lizards, the work seems ready to weave into daily life, in the way it sketches the contours of community in the face of impossible political exigencies. This approach goes beyond merely using improvisatory processes to create linear narrative works in which the audience can lose themselves. Despite their sci-fi overtures, the live-action sequences have a documentary aspect that refers directly to a real social process that existed at the time of filming, the process of Bennani’s participants coming together to express their own position in relation to her prompt.

This approach stands in contrast with the kind of traditional narrative expectations that Western audiences are groomed to expect in fiction, but also in world events. The artist Olia Lialina recently reflected on the power of linear narrative expectations, citing (and objecting to) Chekhov’s famous argument about narrative expectation: “You can’t put a loaded gun on stage if no one means to fire it. You can’t make promises. Let Dasha be silent altogether—that’s better.” Lialina argued that this tragic law governs not only fictional narrative but real world narrative as well. She concludes, “Leave the guns unfired and give the stage to Dasha!”

Bennani does not preclude the possibility that the guns may be fired (at least figuratively). She offers her prompt as an open question—will the Crocos choose direct action or symbolic protest? As Life on the CAPS comes to a close, the Crocos gather in the car dealership, singing and clapping. “O the Crocos! Freedom!” Suddenly the darkened showroom is illuminated by a blinding spotlight, flashing red and blue signal the arrival of Troopers. The Crocos fall silent for a moment, approaching the window fearfully, before bursting out into song defiantly once again. The narrator concludes by explaining that the Croco is the symbol of resistance for the Capsis not because of the fear it inspired in the Troopers upon their arrival on the island, but because of its heart, which can reroute blood as needed to any part of the body. It’s a powerful ending, but the Crocos’ ultimate decision is, on some level, less important than the process that led to it, the open-endedness of the scenario that was offered to the participants, and the rejection of the linear narrative demand that the loaded gun must inevitably be fired. 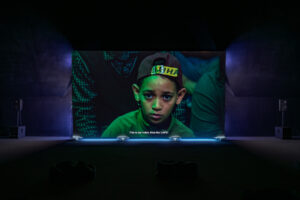 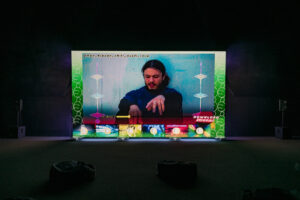 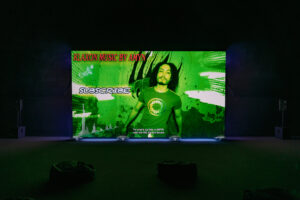 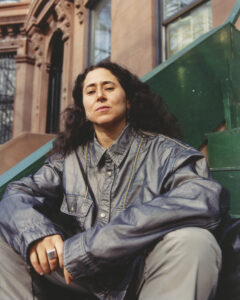 MERIEM BENNANI (b. 1988, Rabat, Morocco) lives and works in Brooklyn. She has developed a shape-shifting practice of films, sculptures and immersive installations, and has exhibited at MoMA PS1, The Renaissance Society, Chicago and Fondation Louis Vuitton, Paris.

MICHAEL CONNOR is Artistic Director of Rhizome, where he oversaw the Net Art Anthology initiative, an effort to retell the history of net art through 100 works, presented as an online exhibition, gallery exhibition, and book. Connor is currently editing a book by Gene Youngblood about the work of Kit Galloway & Sherrie Rabinowitz.