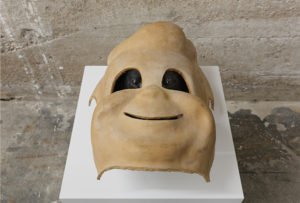 When contemplating the newly proposed railroad system in the early 19th Century, Dr. Dionysus Lardner, a professor of natural philosophy and astronomy at University College London, warned that “rail travel at high speed is not possible because passengers, unable to breathe, would die of asphyxia.” He was among a group of intellectuals who feared that the acceleration of the new technology – quite literally its speed in miles per hour – would be unbearable to the human body. Public health officials warned of mass hysteria, vertigo, and brain damage on account of the rapid movement of the trains. Humans were slow creatures who needed slow machines.

Talk about technological acceleration in the epoch since the Industrial Revolution has reached such a fever pitch today that we speculate not about bodies whizzing on trains, but being pushed through Elon Musk’s $6 billion Hyperloop – a tube shooting passengers in pods on a frictionless high-speed journey between L.A. and Silicon Valley, careening at a cool 760mph. Whether or not we would even feel the jolt of the journey is an open question, given our bodies’ nascent adaptation to a landscape of driverless cars and “optimized” experience in every dimension: selves made permanently hybrid through nanotechnology, prosthetic torsos and limbs, and the implantation of artificial intelligence. In some regards, futurist Ray Kurzweil’s prediction of the Singularity has arrived, a time when human intelligence and the purifying concept of “the human” is itself no longer tenable.(1) It isn’t that machines are too fast, and humans too slow, but that the boundary between one and the other is an impossible line to recognize.

Today’s field of contemporary art, and particularly sculpture, presages the expansion of our dystopic sci-fi inclinations with materials that reference biological alienation, the interplay of human and machine, or what theorist Bifo Berardi would call the “mutagenic age,” a time when, “the relationship between the organism and its environment is perturbed, redefined as stochastic, fragile, probabilistic.”(2) This evolution gives rise to biopolitics in which “the normality of humanity… has lost all relation with what used to be human,” and is left searching for a modicum of affective connection, or even a substitute for emotional and physical contact. Whether bearing the empty catchall ‘post-Internet art’ or not, a number of art practices today consider this new bodily alienation: hi-tech, hi-gloss simulations of life after the flesh.

With this as the fluorescent-lit backdrop to what David Joselit calls the “super-velocity” of contemporary art, the sculptures of Michael E. Smith are, in many ways, oddly dusty. 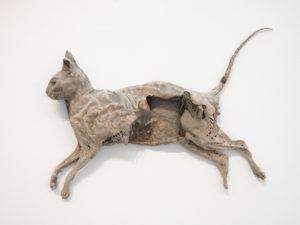 Where do they fit in an art landscape currently littered with neon tubes, branded body gels, corporate aesthetics, or any number of organicist experiments with creaturely ecosystems (bacteria, grass, termites: you name it, an artist is growing it)? Smith’s works are neither alive, in the biological sense, nor are they overtly tapping into the techno-animistic, screen-addled aesthetics of much art post-net. And yet they seem innately connected to the body without being an anarcho-primitivist nor a neo-Luddite inversion of a contemporary fascination with the screen. In many ways, Smith takes on technological immersion, but flips the perspective: his work reflects on the decaying, crusty remains of the human, whose evolutionary time-scale is moving at such a slow pace that its corporeal shell is quickly becoming viewed as obsolete technology.
In the related works LBS and RBI (both 2013), for example, Smith removes a laptop touchpad and puts fragments of a human skull in its place. In RBI the bones jut out from the computer’s innards, and in LBS they protrude downwards, in a kind of prehistoric/post-human touch. The relative time scales of the juxtaposed material are striking – one evolved over millions of years, only to be outlasted by the machinery of the past two decades. The cryptic abbreviations of the works are difficult to parse – perhaps referencing the body as its statistics (pounds, runs batted in), or meditating on the nature of consciousness (left brain/right brain), and its ongoing adaptation to technological sense—including machines that may eclipse its processing ability.

Smith’s is a world littered with corpses: a limb-like armature tacked to the wall (Untitled, sweat pants, 2013); a series of fabric sarcophagi (Untitled, sleeping bag, springs, 2015); a ghastly shell of a feline (Untitled, cat, 2014). When written like this, with their material descriptions, one “untitled” object after another, the works become a post-apocalyptic inventory of skins left behind. For Smith, it seems that bodies are best figured through their abandoned containers, which means that he makes them into ghosts, but also presents them as vulnerable beings in need of protection or comfort: Untitled, child’s car seat, 2013. In a particularly haunting work, Mud Room, 2015, Smith reproduces a row of children’s cubby-storage but emptied of its belongings, which looks like a row of small white coffins. 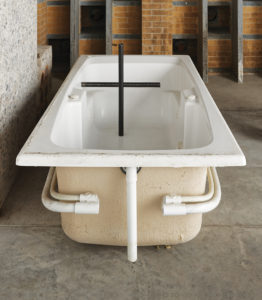 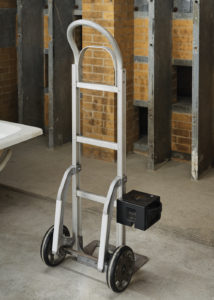 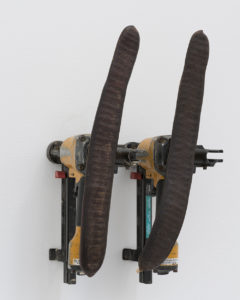 Like many artists today, Smith embraces quotidian objects, and their ready-made material and cultural histories, as vehicles for artistic expression; in other words, appropriation is a means to an end, rather than the subject of the work itself. Yet his use of sourced objects stands out for honing its gaze not on the white-collar aesthetics of the industry trade-show or retail display, as in recent installations by Simon Denny, Anicka Yi, or DIS Magazine, but on the decidedly less alluring and even plaintive aspects of working-class life – pallet jacks, nail guns, car parts. One imagines that if Smith ever simulated a retail environment, it would feel more like a half-empty aisle at K-Mart late at night, lights flickering, than like the sleek environs (though perhaps equally bleak) of a luxury showroom. His is a world with too many abandoned things – a low-end whirlpool tub, mini-van console – whose aspirations, at times, are rendered pathetic by his making them appear all the more lonesome. Smith’s subtle and not-so-subtle gestures towards class come off as less a biting critique of consumption than as effective reminders of the vicissitudes of an accelerating capitalist environment that has eviscerated any lingering sense of upward mobility.

Smith creates a cosmos in which the body moves at the speed of bone. Could it be, the work makes us wonder, that the human is stuttering, shedding its shell? Will we be able, in a machine going so fast, to catch our breath?

The Singularity is a term popularized by sci-fi author Vernor Vinge in his 1993 essay The Coming Technological Singularity, and refers to a time in which machine intelligence will outstrip human comprehension. Ray Kurzweil adopted the term in his 2005 non-fiction book The Singularity Is Near: When Humans Transcend Biology.