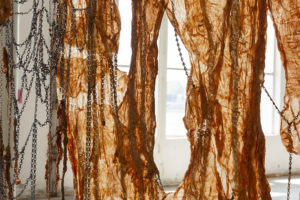 Mire Lee’s promethean sculptures and installations instill a creeping transgressive horror. Twisted piles of rubber tubing, pools of silicate, and ventricular pumps gurn, and ejaculate. Hung like sides of meat in an abattoir, or writhing slowly on the ground, they elicit disgust, desire, and curiously, maternal tenderness. There is no sense of healthy growth, rather each is an entropic system. They devour themselves as the exhibition progresses, hard mechanics grind down soft material. The process that leads her to the form of each is instinctive and bodily, driven by material qualities, and a desire to avoid the clean lines of ‘art.’ Instead she develops an aesthetic of excess and overdrive, creating encounters that are profoundly affective, speaking to the grim human fascination with the roadside crash. To encounter her work in the gallery space is to be confronted with a disintegrating simulacrum of our own frail flesh. As the viewer, the distance between the work and ourselves collapses; one body viscerally responding to another.

Having been consumed by comics and fan art as a teenager, Lee became a skilled draughtsman, producing neat line drawings. Her subsequent practice as an artist is a marked attempt to destroy this neatness. Discovering motors and mechanical processes gave her a pathway into a new way of making that left much to accident and discovery. Her works have grown from loose assemblages lying on the ground to complex interrelated mechanical figures linked by pumps and veins of liquids. The process of making each sees Lee battle with her materials. They are slippery, large-scale, and teeter on being beyond her control. Fluids slop over pristine museum floors, and mechanical parts truculently break down. Lee risks being swallowed by the work. A self-proclaimed anxious maker, there is a method in her being engulfed by the task at hand, losing herself in material demands. 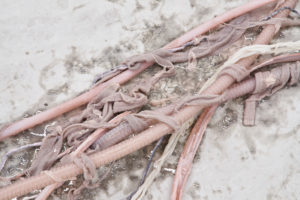 Made of only hearts, installation view, As time went on, a rumour started (detail), Gianni Manhattan, Vienna, 2020 Photo: kunst-dokumentation.com Courtesy: the artist 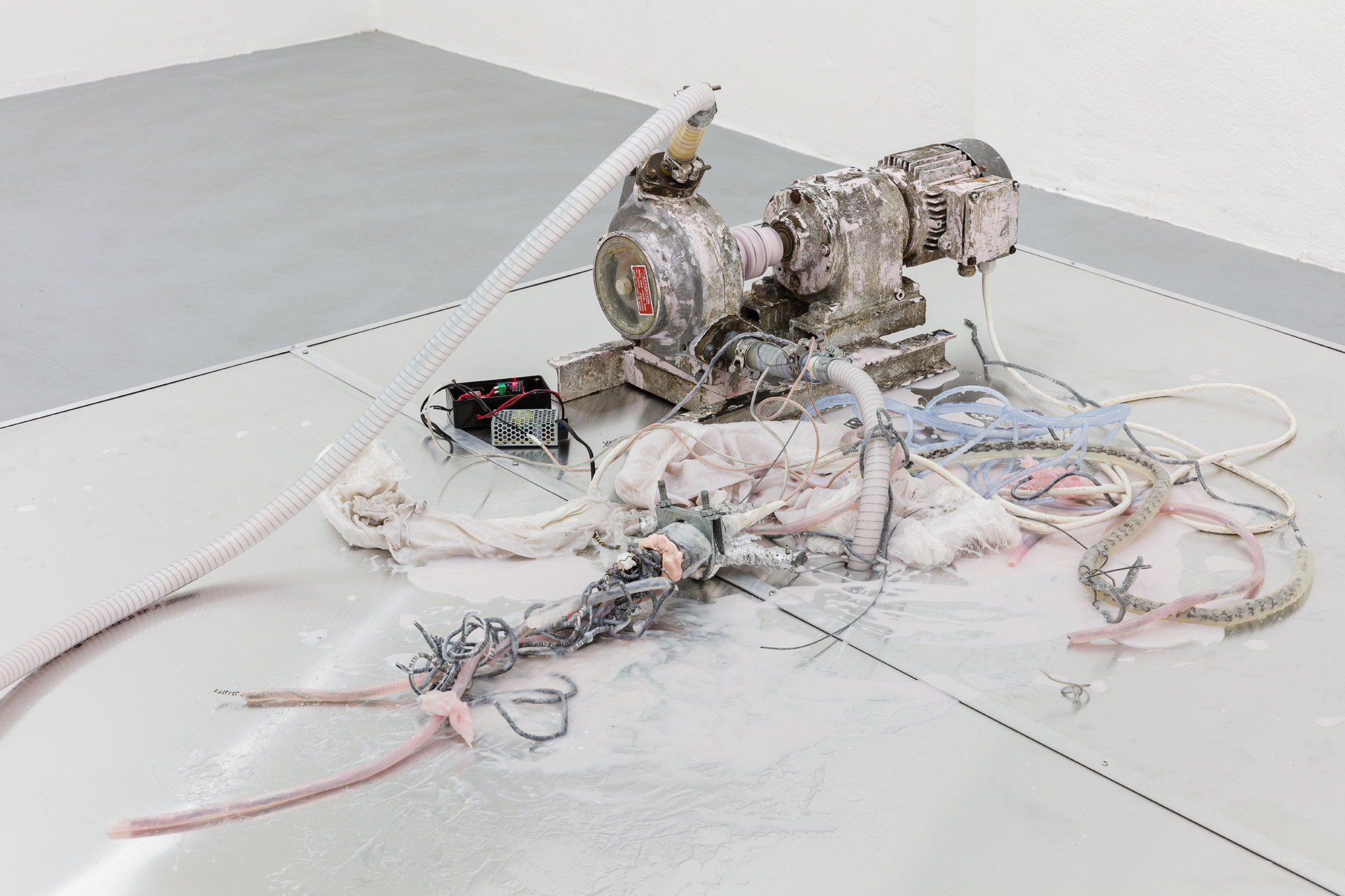 Made of only hearts, installation view, As time went on, a rumour started, Gianni Manhattan, Vienna, 2020 Photo: kunst-dokumentation.com Courtesy: the artist

The subculture of Vore is an essential facet of Lee’s work. Vorarephilia is a sexual fetish driven by the desire to be consumed by, or consume, another, and draws from the Latin for ‘throat.’ Vore has a vivid visual culture. Distortions of scale are often central. Characters, both human and non-human, grow to huge sizes in order to swallow another person, or shrink in order to be swallowed themselves. Some enter into erogenous zones, burrowing into a vulva like a child returning to the womb (unbirth). The consumer, or ‘predator’s’ opened mouth and gullet are intensely sexually exciting, as are impossibly distended round bellies. Food, and its consumption, are another aspect of the fetish. Lee cites Pascal Quignard’s novel Vie secrète, in which a lover voraciously eats meat in front of the protagonist, as holding an abiding fascination for her. Devouring is the ultimate way to a complete a union. Flesh becoming one flesh, the lover physically digested, matter transformed, and energy released. In this cosmos you eat to own the other, it is a power play and, for Lee, a deeply moving gesture of love that provides a ground from which her sculptures can evolve. Vore thus becomes a formal proposition.

In one of her works Lee actualizes this consumption; i wanna be together (2019) sees her incorporate parts of art works by other artist friends. Pieces of materials, fragments of their practices, are encased in plastic tubing, like animals swallowed whole by a translucent bellied snake. The piece hangs suspended between old and new sections of the Seoul Museum of Art. A fitting testament to the way in which the new architecture subsumes the old. 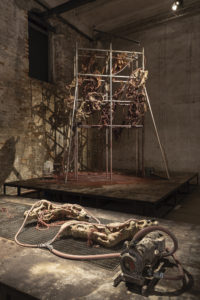 Crystallized moments of horror, grief, loss and bodily harm underpin a constellation of recent works that featured in her exhibition at the Art Sonje Center in Seoul. In Carriers (2020), two large-scale kinetic sculptures hang from the ceiling, another lies prostrate on the floor. They are formed of crenelated tubes bunched together like swags of intestines sweating with glycerin. Their proximity disturbs the reading of a nearby projection; Sleeping Mom (2020), a tender looping video of her sleeping mother that renders her, as Lee states, “like a side of meat.” The mother as a carrier speaks to Lee’s own gestation of monstrous creations, but here she also shares a morbid fixation with the prospect of her mothers’ eventual death. In the film she is asleep fully-clothed and lying prone on a sofa. The image of a dormant body conjures a mixture of cuteness and vulnerability. The film both explores the inevitability of her death and honors her. Elsewhere are drawings by artist friend Ivan Cheng, made after a photo Lee took in Switzerland of the anarchist slogan “Eat the Rich.” The phrase was said to be uttered by Rousseau, and circulates still as rallying cry of class struggle. Lee’s exhibition swallows the phrase, and the work of another artist, reproducing them again and again until the image fades, as if it has passed through multiple stomachs and been leeched of nutrients.

Lee has developed a sculptural language that is esophageal and intestinal. Form becomes the passageway, or carrier, through which fluids pass and ooze, organisms that ingest and excrete as complex matrices of horror, violence and lust. They are almost performers, enacting abject choreographies, that channel contemporary attitudes to maternity and death. They trigger recognition, evoke horror and fascination, so enacting and amplifying fundamentally human responses to other bodies; how do we relate to other flesh, how does the abstraction of bodies allow for certain violence or behaviors, and how do we deal with the inevitability of our own deaths? Lee’s bodily sculptures open an ambiguous and complex libidinal space for confronting such questions. 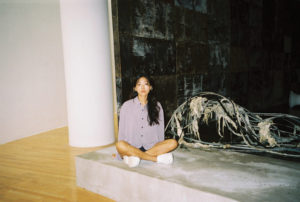 MIRE LEE (b. 1988, Seoul, South Korea) lives and works between Seoul and Amsterdam. Her work challenges notions of selfhood, social acceptability, and cleanliness; obliterating societal conventions of aesthetics in the face of her transgressive and kinetic technologies.

NATASHA HOARE is Curator at Goldsmiths Center for Contemporary Art, London and is Contributing Editor at Extra Extra Magazine. She was previously Curator at Kuunstinstitute Melly, Rotterdam.