The apple has never been a particularly sensual fruit: it is only (an understatement!) the biblical tradition that associates it with sin. The apple is sensual in Eve’s hands, when she offers it, when one imagines the rotation of her wrist that allows her to show off, to tempt… otherwise the apple in itself, smooth-skinned and compact, does not offer great cues for seduction. Things are a bit different with a peach, especially regarding its white or yellow paste with a slightly fuzzy skin. Touch, juice, chromatic contrast between the pulp and the corrugated stone, and probably also its association with summer, the season in which the peach ripens, are all joyfully provocative elements. “Elio” Chalamet recently celebrated the peach in Call Me By Your Name.

Nevine Mahmoud’s fruit does not lose an ounce of this sensuality, but shifts it all to the visual dimension and to the tactile contradiction. Her peaches, watermelon slices and big cherries are very compact, concentrated. 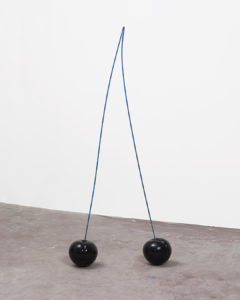 They are made of marble, or alabaster, and the finish of their surfaces is calibrated to irresistibly entice one to touch them. One of the peaches has a slice cut out of it, shamelessly revealing its stone of another color; on another of these fruits a big tear is rolling down; on the sides of a watermelon slice there are droplets of sweat/condensation, while another slice has been bitten… From an Italian point of view, these slick pieces bring to mind the Memphis style, the ’80s, a world of interior design in which hot and cold are useless antinomies in the face of the chromatic and graphic vitality that always emanates from the object. “Yes, why not? I am attracted to Italy, and in particular to Milan,”(1) the artist says.

Mahmoud also uses blown glass, mainly turning it into parts of the female body: flabby breasts on soft bellies, or single breasts or legs, always one at a time, always featuring an opalescent quality of the material—more aimed at exploring the opaque liquidity of glass than its mineral transparency. With these works, one may be tempted to think of a more decadent, or even painful take on form by an artist who chooses to face and focus on solid materials and finished forms.

The peach, like other Mahmoud subjects, comes in different versions. Probably the best known is the one entitled Cleave and Spread, in orange calcite with its stone fragment in pink alabaster clearly visible: a gentle yet unmistakable allusion. I happened to see it in one of the European venues of the group show Seven Sisters, curated by Martha Kirszenbaum and featuring works by female artists focused on female physicality, as part of the theme of control over one’s body and one’s intimacy. By Mahmoud there were also a lily and a mouth, and her role in the exhibition was to confirm the possible softness of marble, deconstructing the tradition of macho-carving.

In a 2016 article,(2) Andrew Berardini outlined the poetic-sculptural genealogy of Mahmoud’s practice, placing it at a point where Eva Hesse and Alina Szapocznikow’s concerns and materials absorb the Californian fetish dimension of a McCracken. Mahmoud moved to Los Angeles in 2014 where she obtained an MFA at the University of Southern California, and it was there that her obsession for sculpture took hold, with the beginning of her quest for sculptors-mentors who could teach her sculpture. Her tension in appropriating a masculine and muscular technique vanishes, a few years later, when Mahmoud no longer doubts dominating it; she also works with glass, excited by the changes in state that the material undergoes, from solid to viscous and boiling, in order to take shape. Aside from the glass pieces, the rest of her sculptures are produced, with the help at the most of one assistant at a time, in her studio in East Los Angeles.

If her materials of choice, as relentlessly repeated when talking about her, are marble—different types of marble in different colors and finishes—alabaster, and glass, it must be said that Nevine works with space in an equally wise manner. The erotic power of the individual elements is alluded to, playful and dense; when the artist arranges them for an exhibition, rather than occupying the space, she draws it. When one looks at one of her exhibitions, or enters her studio, the eyes follow a movement that certainly draws strength from the fact that it is provoked by individual, mocking and seductive entities. But a big part in this game is also played by the stands: the soft blue donut, an ass-hole-donut, is placed on a fluorescent Plexiglas base; the tongue (sometimes with a round hole in the middle) exists because it sticks out directly from the wall; cherries are characters, with disproportionate linear petioles that thrust themselves into space; the soft busts protrude from the wall held by a solid curved metal pipe, far from seductive or discreet; the glass leg rests on small wooden pillars; other pieces are on transparent glass plinths… it’s a visual score.

There is something of Mahmoud’s own physicality as a young woman in this way of being in space—energetic and concentrated, with a precise desire to know how to occupy all the space. She is long-limbed, and since she is in Los Angeles her limbs are often naked. In an interview asking her what her work robes are, Mahmoud replies “Leggings and shorts in the summer—although I have some pretty gnarly burns on my hands and legs just from the grinders, so I should be wearing long pants all the time.”(3) Instead, she leaves her skin exposed to space, to her materials, her techniques.

I am preparing an exhibition in which she will take part together with Derek MF Di Fabio and Margherita Raso;(4) Derek says that Nevine’s works are a bit like black holes for their material and non-material density.

While working on this project we passed around Ottessa Moshfegh’s stories, both the participants and I completely taken by the existential darkness void of drama of her narration. In Moshfegh’s latest novel, the main character looks carefully in the mirror and detects a small dark shadow inside his pupil, saying “Someone said once that pupils were just empty space, black holes, twin caves of infinite nothingness. ‘When something disappears, that’s usually where it disappears—into the black holes in our eyes.’ […]”(5) 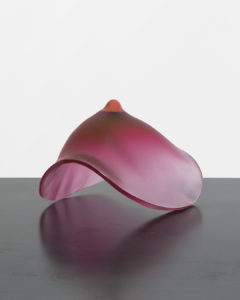 NEVINE MAHMOUD
Text by Eva Fabbris
CURA.33
In the middle of Nowhere

All images
Courtesy: the artist and M+B, Los Angeles

NEVINE MAHMOUD (b. 1988, London, UK) received her BA from Goldsmiths, University of London and MFA from the University of Southern California, Los Angeles. Her work was recently on view in The Artist is Present, curated by Maurizio Cattelan, at the Yuz Museum in Shanghai. Recent group exhibitions include: Dreamers Awake: Women Artists After Surrealism, White Cube, London; The Poet, the Critic and the Missing, the Museum of Contemporary Art, Los Angeles.

EVA FABBRIS is Exhibition Curator at Fondazione Prada, Milan. She is also active as an independent curator and art historian; in this capacity, she is curating the next cycle of the Fondazione Pomodoro’s Project Rooms and the solo show Alessandro Pessoli. Testa Cristiana in the Chiostri di S. Eustorgio, both in Milan in 2020. She curated exhibitions at the Nouveau Musée National de Monaco in Montecarlo, la galerie de l’erg in Brussels, Triennale di Milano, Fondazione Morra in Naples.