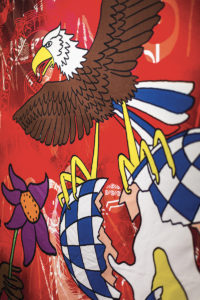 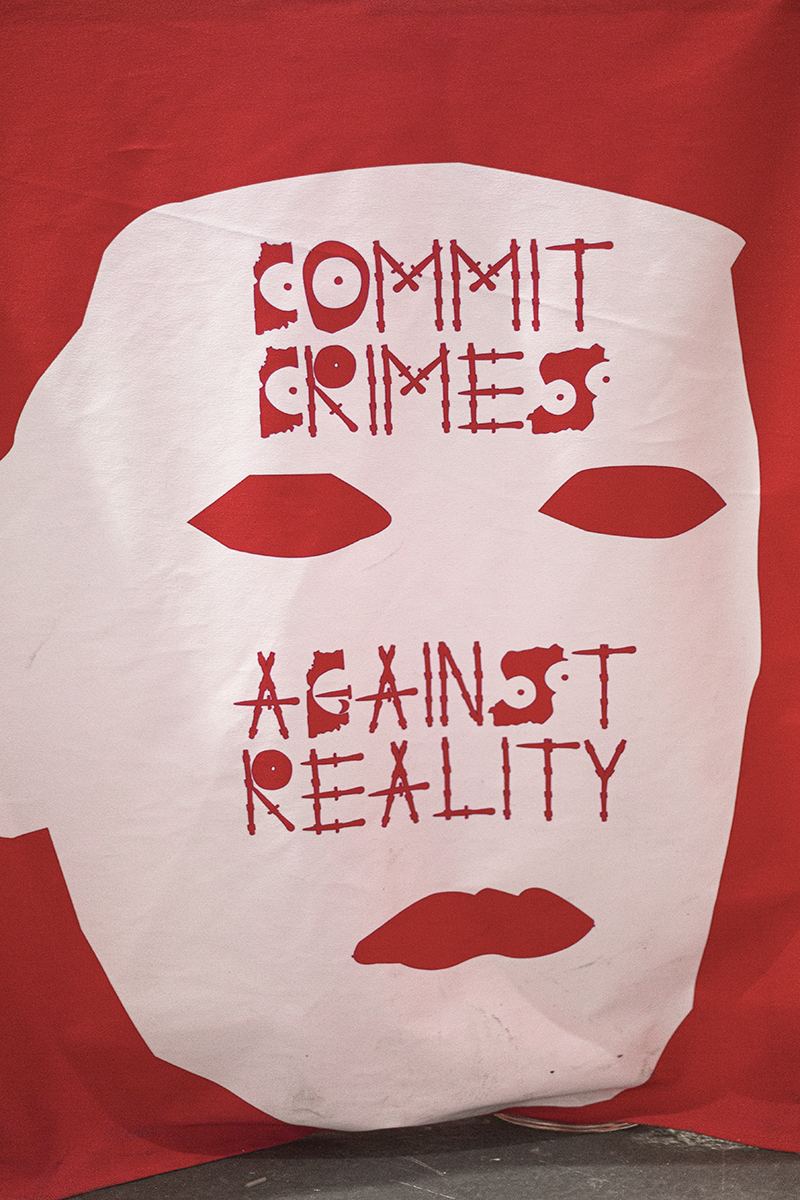 In 1996, on the banks of the Columbia River in Washington, two men found human remains that proved to be as old as 9,000 years old. Ancient human remains in America are rare, and since this was the most complete skeleton of a Paleo-American ever found, the news became a national sensation. A legal dispute followed: on one hand, forensic specialists claimed at the time that the cranial features indicated a European origin that had to be further studied; on the other hand, five Columbia Basin tribes claimed that this was their ancestor, and thus demanded, through the 1990 Native American Graves Protection and Repatriation Act, that the remains be returned to them for a ceremonial burial. After years of legal battle, in which the court found the ancient knowledge and histories of the tribe to be unreliable and insufficient, advancements in Ancient DNA testing revealed that, indeed, the Ancient One—as it was named—belonged to the Columbia Basin tribes. 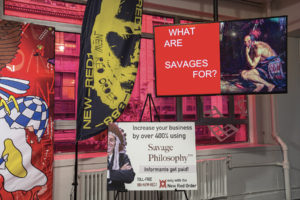 In their video work, The Violence of a Civilization without Secrets (2017), the public secret society New Red Order retells this story through a montage of tv footage, court testimonies, original animations, and 3D renderings, gathering an array of reactions from different individuals, that unmask an eagerness to rewrite America’s cruel history of colonization. Not only does the work highlight the necessity of Indigenous sovereignty, but it challenges the mythology created around the nation-state, positioning urgent questions like Who gets to decide how history is being told? And in what way?

This is what makes NRO’s artistic practice one of the most exciting and, at the same time, one of the most critical to pay attention to today: it renders a critical consciousness to acknowledge the process of decolonization and situates a strategy towards collective mobilization that has the potential to disrupt colonialism. Few artists have managed to successfully balance this complex subject with a clear call to action, and to emphasize its significance and urgency, whilst also lacing it with enticing visual language and a comedic irony.

As a “public secret society,” New Red Order is formed by three core members (Adam Khalil, Jackson Polys, and Zack Khalil), and a growing network of collaborators called “informants.” Employing the idea of the “informant” came from the artists’ recognition of finding themselves, as Native Americans, constantly being called on to inform on their own cultures by the institutions in which they were showing their work. Thus, NRO created an open enrollment, often promoted through in-gallery recruitment strategies (publications, pamphlets, promotional materials, and video campaigns), that invites people to undergo initiation, promising a better understanding of their position in the context of settler-colonialism, with all the paradoxes that derive from that, including their desire for Indigeneity. Take, for instance, the figure representing as a “host” of NRO: Jim Fletcher. A self-described “award-winning actor and “reformed Native American impersonator,” Fletcher appears in many of NRO’s works, calling himself “an accomplice” of Indigenous peoples or “their proxy,” and explaining how becoming an informant can catalyze an expansion of Indigenous agency.

Half parody, NRO is mocking secret societies founded in the US before the American Revolution, such as The Improved Order of Red Men (which still exists today) or its female auxiliary, The Degree of Pocahontas, that historically appropriated and impersonated Native American culture and people, those secret societies that flourished alongside attempts to systematically exterminate Indigenous people. 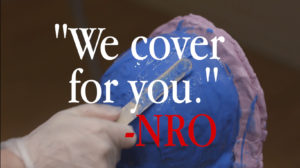 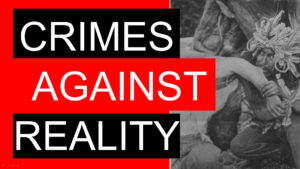 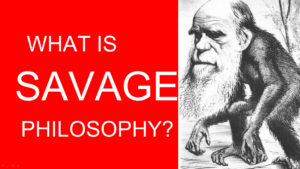 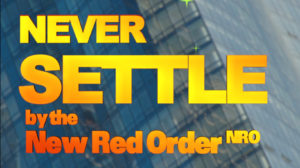 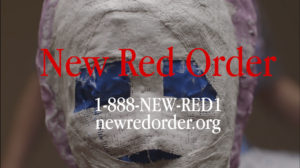 Quoting Philip Deloria, Eve Tuck and K. Wayne Yang make a poignant analysis of the idea of “playing Indian”, in their essay Decolonization Is Not a Metaphor:

“Playing Indian is a powerful U.S. pastime, from the Boston Tea Party, to fraternal organizations, to new age trends, to even those aforementioned Native print underwear. Deloria maintains that, ‘From the colonial period to the present, the Indian has skulked in and out of the most important stories various Americans have told about themselves’ […] The indeterminacy of American identities stems, in part, from the nation’s inability to deal with Indian people. Americans wanted to feel a natural affinity with the continent, and it was Indians who could teach them such aboriginal closeness. Yet, in order to control the landscape they had to destroy the original inhabitants.”[1]

Tuck and Yang depict how the settlers’ inability to completely eliminate indigeneity led to a feeling of inadequacy to secure absolute domination over land; and further led to a kind of perverse fascination, where cultural appropriation and romantization become further strategies of eradication.

In the currently called United States, the beneficial implications derived from the Indigenous dispossession, land theft, and generational oppression that the settlers have had over the last hundreds of years, up until the present day, is a hard pill to swallow. Conversations around decolonization have become a trend in humanistic fields and academia, including in the art world. The performative display of solidarity that often has no further consequences allows the settler to feel at ease just by acknowledging the injustice. This is something that Tuck and Yang call “the settlers move to innocence,” in which feelings of guilt are alleviated to ultimately serve the settler.

NRO, although offering a critical view of performative decolonization, also encourages “the de-metaphorization of decolonization,” providing the possibility of understanding and envisioning new ways of promoting Indigenous growth. One of their works, Give It Back (2020)—an installation with a street-facing window display that reimagines a real-estate office—enjoins visitors to restore land to Indigenous people, and reveals other examples of property that has been restored or has been promised to be restored. Often highlighted through slogans like: “TIRED OF LIVING ON STOLEN LAND? GIVE IT BACK,” repatriation is a central and practical necessity for NRO. 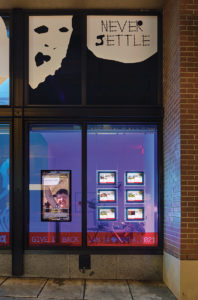 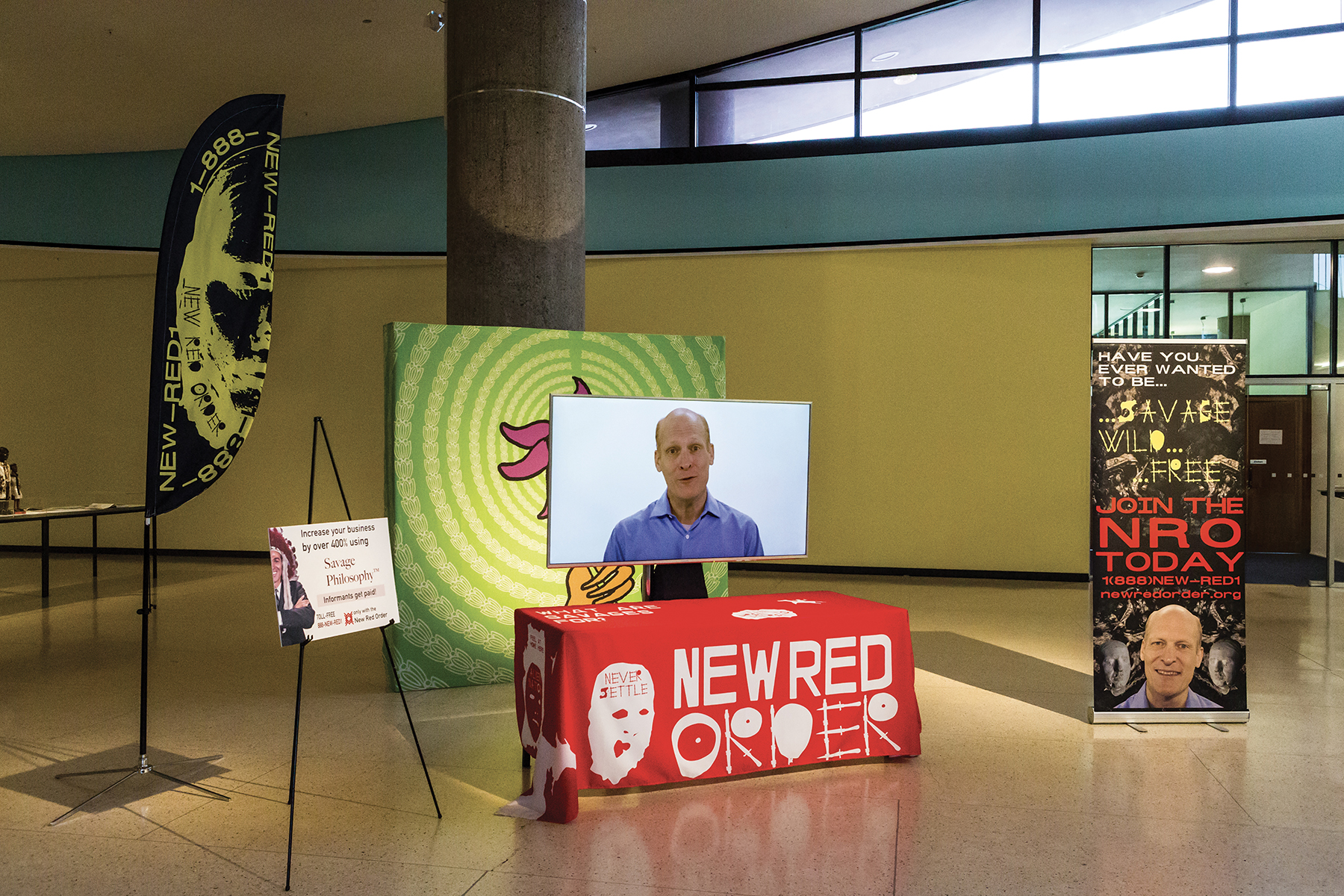 Matters become even more complex when it comes to the violence inflicted by institutions, monuments, and archives, set in place to directly or indirectly serve the settler-colonialist paradigm. In the series Culture Capture, NRO juxtaposes archives and monuments with new technologies, like 3D scanning, to explore Western society’s ongoing obsession with seizing, collecting, classifying, and preserving Indigenous objects, as well as to depict how colonial powers solidified their ideological domination and their national identity in newly controlled territories, through institutions and disciplines like art, ethnography, and anthropology. However, revisiting monuments and archives through Indigenous perspectives shakes the symbolic order and undermines some of the most toxic forms of American Nationalism. For instance, in multiple video works, NRO looks at the practice of James Earle Fraser—the famous American sculptor (1876-1953), who lived during the colonial expansion westwards that resulted in the subjugation of Native Americans. Fraser created the controversial sculpture Equestrian Statue of Theodore Roosevelt, located since 1940 in front of the American Museum of Natural History in New York. In 2020, it was unanimously voted that the sculpture should be relocated as Roosevelt is depicted flanked by a Native American and an African man—a clear symbol of colonialism and racism that became even more intolerable after the killing of George Floyd. NRO depicts the materiality of signifiers as undeniable violence on Indigenous peoples: “The presence of Indian bodies outside made of marble, bronze, and stone, often signifies the presence of Indian bodies inside made of bone, brain, hair, heart and lung. These monuments conjure terrifying realities.”[2]

Revealing the true face of settler-colonialism as a destructive culture, suffocated by its own accumulating burden of archives and monuments, NRO’s practice is unique due to its ability to display the obvious solutions in reconfiguring the current ideological structures. And although the concept of decolonization moves freely through different materials and mediums in NRO’s practice, it does not go unchallenged. NRO questions everything to promote Indigenous futures, and to move forward in the face of the inconsistencies, contradictions and paradoxes that have emerged from settler colonialism.

ADRIANA BLIDARU
is the editor and curator of the curatorial platform Living Content in New York, and has previously worked with Rutgers University, Hessel Museum, Wendy’s Subway, ICP, and Judd Foundation in the U.S., amongst other international institutions and galleries. Blidaru has an MA in Curatorial Studies from Bard and a BFA from the University of Oxford.