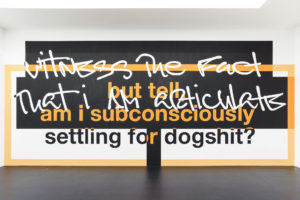 Trapped between the desire for authenticity and the burden of uniformity, gentrified language has not only pervaded our urban fabrics, but also our (digital) bodies and brains. Our expressions balance on the fault lines of the too-early and already-too-late, the heart-felt and the under-complex, the coinciding of the predictable and the surprising, the trash and the well-designed, the longed-for autonomy and relentless determinism, the fearful, unbridled intensity and ever flowing flatness. In that world of commerce, digital aesthetization and representations of the self, Turato’s work elucidates a fierce, but fearful world. Its crux being “[w]ords are way too easy to play with, but i have only words to play with, wooooordsss.”

Turato’s work begins with employing her digital scraping skills to rid the Internet and 4G networks of their most poignant linguistic expressions. 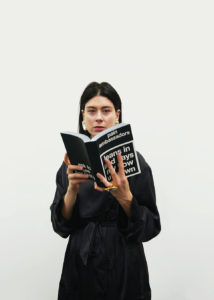 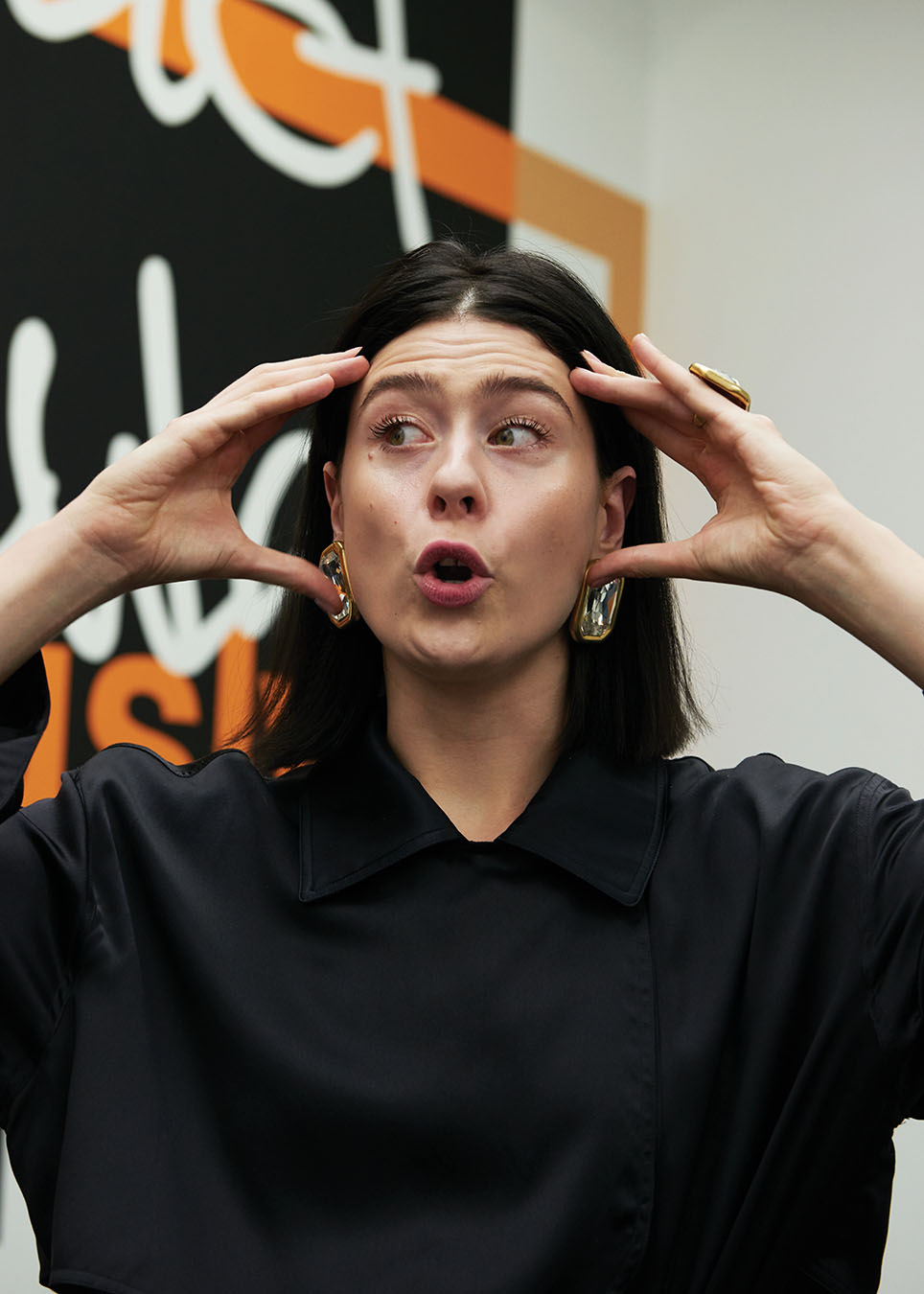 With a fine nose for what smells deeply of neoliberal sarcasm and contemporary uprootedness, she roams and scavenges her feeds, accounts, messages, listings and endless digital flows of banal wisdoms and sensical nonsense. Such utterances form the pool from which Turato pulls out a wide array of aesthetic expressions, be they scripts, performances, videos, publications, installations and merchandising: “i’m proud to be the eerie one / to get anywhere you had to go everywhere.”
While performing, Turato shouts and snarls with great capriciousness, then speaks manifestly and decisively, with irony or gravity, with flippancy. Armed with modulating expressivity, she spits statements in a recitative manner ranging from the banal “Men think all soup is healthy to this very day” to the critical “I think corporate body positivity is gallingly empty and passive aggressive. They give an illusion of feminine empowerment but their empowerment is firmly within the boundaries of beauty culture.” Turato is a master in the economy of attention and flawlessly conjures thirty-minute monologues, declaimed as if there were no tomorrow. She composes the attention of an audience with text elements that stem from a digital environment—paradoxically that very language which has so drastically shortened our attention span. Exactly there, between the body and the digital, a recalcitrance arises that aims itself between identification and criticism: “feels like the end of the world is near, but not near enough.” 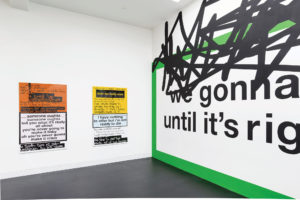 Nevertheless, performance only constitutes one aspect of Turato’s wide range of productions. Trained as a graphic designer, her visual work highlights a passion for image, referencing forms and idioms of a daily, metropolitan life. Be it a poster series evoking the color-sectioned design of cigarette packaging or huge graffiti tags sprawling across museum walls, Turato’s forms work by way of blow-up, leaving an eerie discrepancy between medium and message: “I retain nothing but headlines. I almost retain nothing.” Turato’s ‘print renaissance’ easily inscribes itself into a lineage of the stark, but tongue-in-cheek declarative statements by Barbara Kruger and the conceptual meditations on authorship by Louise Lawler. Yet, taking language solely as its main producer of meaning, Jenny Holzer’s disquieting Truisms (1977-79) retrospectively feel like an echo of Turato’s work from the future. And in the meantime, ‘mall-generation’ became iGeneration. Billboard turned into motherboard.

“We must finish her off, I’m afraid!” she screams. Turato fiercely casts off the historical cosmology of female silence and penetrates the space with sharp, multilateral sonorities. In the Palermitan Oratorio di San Lorenzo, Turato installed a hybrid sculpture (i’m happy to own my implicit biases (malo mrkva, malo batina), 2018) made out of pierced, black metal. It recalls both a confessional and a church bench. This set-up, blending the convolutions of Sicilian baroque with the stringency of contemporary fencing, serves as the portal for a transhistorical dialogue between Turato and the ‘donas de fuera’ (women from elsewhere) who were at the time of the Spanish Inquisition outcast—and thus silenced—from Sicilian life. Shrieking, her voice echoes, just like the nymph Echo, “the girl with no door on her mouth.”1 Yet, open mouths have to be fed. Turato’s it’s a good thing he didn’t click (2019), a hybrid between a minimalist sculpture and a Bulthaup kitchen—USB-ports included—, evokes the gluttony of today, sitting somewhere between the lavish and the minimal. A place for feeding. A place for charging.

And in the middle of her gathered statements, a heightened sense of expressivity and a seeming autonomy of text, a question lingers in my mind: why does the ‘i’ in iPhone find rest in a lower case? Pastiche, fragmentation and cut-up drive Turato’s statements into chain of collisions until the I becomes an i. Statement becomes utterance, and the omnipresence of opinion turns into a sea of sound. The ‘i’ of innovation and internet, the ‘i’ as in ‘eye’, the ‘i’ of a lower form of I. Yet, as Anne Carson has it: “Every sound we make is a bit of autobiography.”2

TOM ENGELS works as an editor, curator, writer, and dramaturge at the intersection of performance, choreography and the visual arts. His writings appear in art magazines such as De Witte Raaf (BE), Extra Extra Nouveau Magazine Erotique (NL), a.o. His curatorial project another name, spoken was presented at Jan Mot Gallery, Brussels, in 2017. His publication on the early works of American choreographer Steve Paxton will appear in 2020.