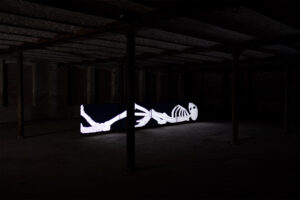 Imagine endlessly looking at the flow of content on your phone or tablet, spanning from tiny kitchen tutorials to people’s tips on how to lose weight, to influencers self-portraits in a hotel, to fashion week images of climate change to war and displacement. You are looking but not seeing, wishing you were somewhere else than alone in your living room, too puzzled and paralyzed by the quantity and diversity of information to react or respond. Do you feel trapped?

Özgür Kar’s non-linear complex installations function as expanded theater pieces. Featuring anthropomorphic white video animations appearing against a black, womb-like void, these characters—laying or resting in intricate positions—unfold existential tales poised between desire, melancholy, and loneliness. Sorrowfully humoristic while lost in contemplation, the minimally animated drawings are set in imperceptible loops that turn videos into sculptures confined within the limits of flat TV screens. Inspired by a variety of genres such as European and Turkish folklore, early 20th-century animation films, experimental theater, as well as 1990’s MTV cartoons, Kar layers diverse sources to represent the shift in digital consumption, imagined as a cacophonic experience inducing self-reflection. The artist points to the ways that technology not only functions as an extension and amplification of the body but also as a means by which labor and affect are displaced and concentrated. 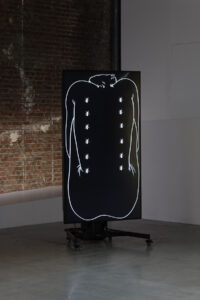 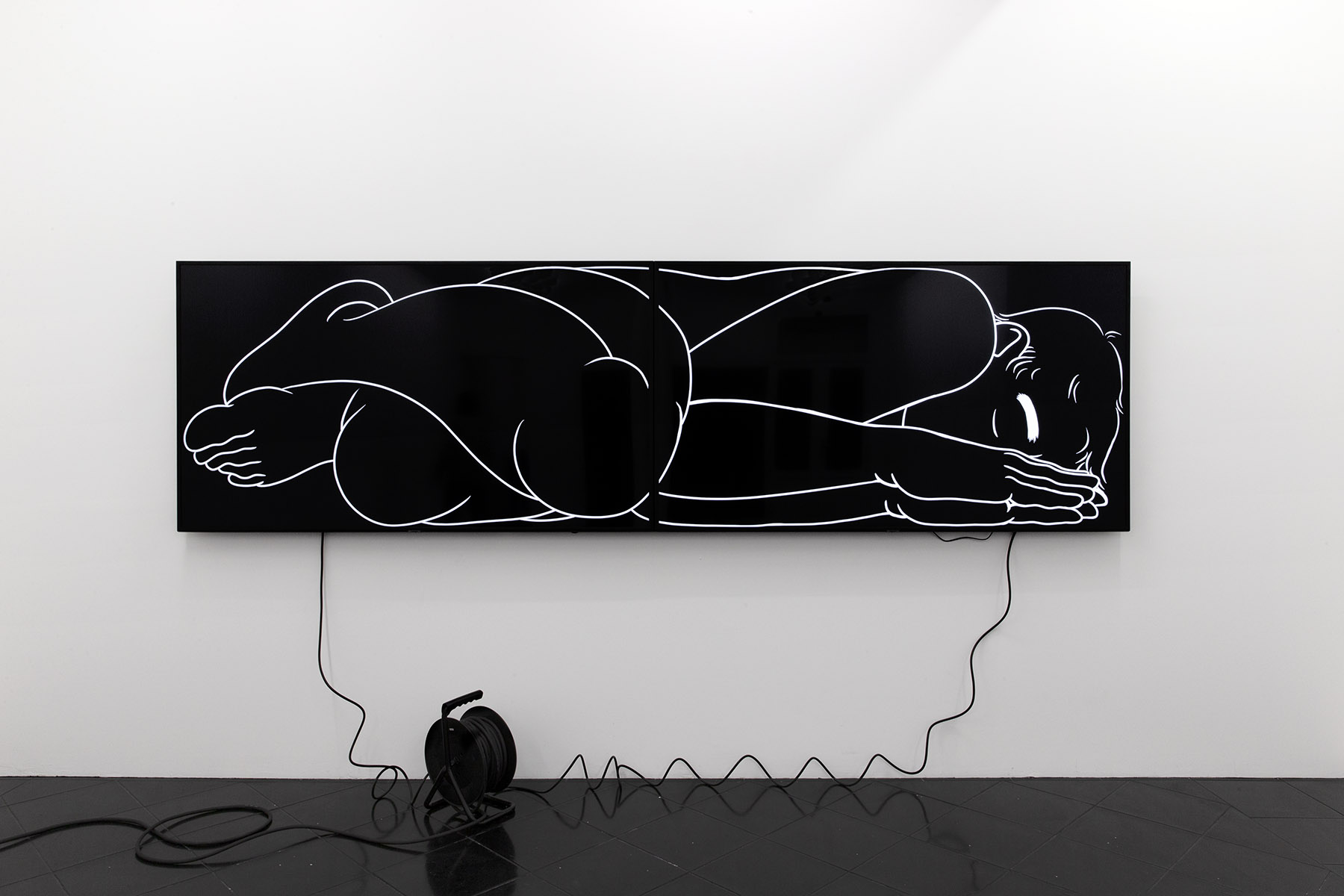 As Jean-François Lyotard writes in Libidinal Economy (1974), “Are we, intellectual sirs, not actively or passively ‘producing’ more and more words, more books, more articles, ceaselessly refilling the pot-boiler of speech, gorging ourselves on it rather, seizing books and ‘experiences’, to metamorphose them as quickly as possible into other words, […]”[2] Kar’s figures partake in the chorus of media information, schizophrenically rejecting the capitalistic cycle whilst being active part in the reception and distribution of content. Advancing questions of power and submission, the characters are often defenseless against external forces as in the work COME CLOSER (2019), exhibited at Palais de Tokyo as part of the show Anticorps (2020-2021), reproducing a dorsal view of a young man submissively crawled upon by a group of ants; or At the end of the day (2019), portraying a kneeled male surrendered in front of a giant technological monster composed by an array of speakers. Technology vs humanity: the coming clash between man and machine. Even if employing preeminent equipment such as Samsung 4K TV screens, media player and surround sound systems—fetished objects of desire for the high-tech domestic consumer—Kar’s work appears somehow very human. The aspect of passive desire has been furtherly explored in the exhibition A Decade of Submission (2020) at Édouard Montassut in Paris, conceived as a soft carouse between two mumbling, wheezing and grunting twin characters, a guy under the influence and it is all in his head (both 2020), caught in a moment of abandon. Expanded in size—each figure is composed by two 75” TVs—you have to linger enough to see them move, or to catch any of the jingles or pop references, whilst being overwhelmed by their apparent physical discomfort and monumental fragility. Shifting the gaze, we wonder if these isolated figures behind the screens are us, numbed perhaps stranded. “Life is just a bunch of content,” declares Death, one of the characters of Kar’s recent installation (MACABRE, 2021), exhibited at KUNSTVEREIN GARTENHAUS Vienna. Conceived during the first stage of the Covid 19 pandemic and imagined as a theater play performed by two dozing characters, Death (2021)—a camp skeleton—and Snake Charmer (2021)—a young man playing the clarinet—words and notes superimpose leaving the spectator at the center of this exchange. By giving an outlandish form to death, an allegory amply diffused in Western Europe during the late Middle Ages, the artist suggests a historical parallel. But here Death appears as a distracted alter-ego. His existential monologue filled with social media postings, seducing news-feed and pop references is interrupted and disturbed by the mesmerizing clarinet score performed by its mortal counterpart: a strange dialogue is so created in a balance between amusement and enlightenment. The analytical work of Samuel Beckett, deconstructing the human condition in grotesque forms, and Lotte Reiniger’s silhouette animations, extremizing facial expressions and body language come to mind. Continuing his interest in experimental theater, Kar’s recent installation, STORAGE DRAMA (2021), exhibited at Emalin in London, delves into the possibilities of disjoint narratives and non-linear scores and scripts. Working closely with voice actors and instrumentalists, the artist has produced a multi-part soundscape performed by three characters—Death with clarinet, Death with flute, and Death with the little bell (all 2021)—blown to full-screen proportions. Returning to the medieval motive of Danse Macabre, populated by dancing skeletons often playing folk instruments in ossuaries—funerary containing vessels or sites in times of plague—we observe the sympathetic figures’ osseous bodies uneasily tailored to the space of TV screens deep-seated in flight cases. Amply used in the music and entertainment industry as shipping containers, flight cases become here transport and display system, narrative device and staged prop: a tool for drama.

Focusing on repetition and fragmented composition the installation has the power of shifting temporalities, each of the figures’ immersive euphony expands and retracts to direct attention across space, mimicking social media’s seductive power. Jumping from macabre observational tones to cartoonish embodiments, Kar’s work conjures cathartic theatricality whilst leading towards liberatory transformation, personal and collective. 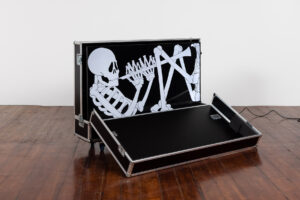 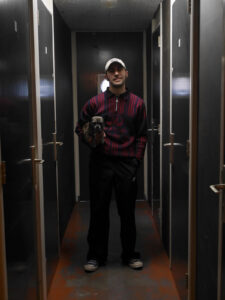 ATTILIA FATTORI FRANCHINI is an independent curator and writer based in Vienna. Since 2017 she has been the curator of the BMW Open Work commission program for Frieze London; Curva Blu, an artist residency on the island of Favignana, Sicily and the Emergent section of miart Milan. She runs the independent space KUNSTVEREIN GARTENHAUS.