Text by by Rindon Johnson 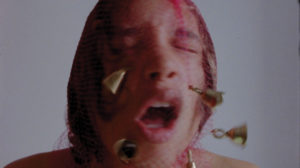 Collings-James develops her practice through temporal and material planes, moving across a long spectral scale with propositions of geological time in her ceramics at one end and at the other the fleeting fugitive nature of her performances and collaborations. 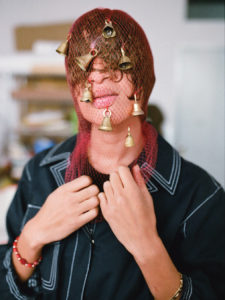 With these two poles as anchors she proceeds in a long stretch of possibility creating objects, paintings, videos and live works which steadily and simultaneously offer, refuse, cultivate and spoil; she leaves a lot in the hands of her viewers, she sends us elsewhere only to find that we remain somehow where we began (possibly this is not a linear scale). Through a myriad of different mediums she allows fixed forms of representation and power to fold in on themselves. In her nimble and easy movement boundaries offer a falsely porous membrane, seemingly still pliable but actually impenetrable, and in this virtual space she constructs the possibility of another form of opening, one that floats like gauze through the viewer’s mind, Glissant’s opacity made manifest.

This gauze of opacity shrouds Collings-James’s ongoing collaborative live work with Last Yearz Interesting Negro (Jamila Johnson-Small), Sounds 4 Survival. The two say of the collaboration, “[l]ife grows between the cracks of this current flesh.” First premiering in 2018 at the Wysing Polyphonic Festival after Collings-James had been a Wysing resident, Sounds 4 Survival is performance as anti-assimilation. Johnson-Small explained to AQNB that the space of a performance functions as “…temporarily my house, my church, my empire—a certain kind of fragile, unknown and precarious sanctuary with the audience as a crucial part of the energetic and physical environment.” The refuge exists because there is something to seek refuge from. Inbuilt to their initial desire of seeking refuge, Collings-James and Johnson-Small also begin to undo the environment from which they flee, in that they are constructing a space for black people to heal, reorienting themselves through manifold actions, performance and otherwise. The pair run workshops, readings, healing sessions; they make space to engage with other bodies through intimate, contemplative, movements and acts. The questions that Collings-James and Johnson-Small tease out in their collaboration are filled with care and in that movement towards the calm elsewhere many limits are touched, moved through and relocated. How do we destabilize the system while still existing and desiring within it? How do we heal the wounds on the bodies of our ancestors, especially those that we cannot name? 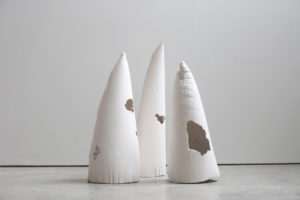 The works that Collings-James presents on her own all seem to be thinking of the body, but not what it looks like, rather the other way that the body is familiar—catching a chill on your neck or the sun shining only on your bare shoulder—the impossible insides of being alive. As though she is throwing out the entire emotion, not an effigy or merely a proposition. Her sculptural interest isn’t figuring the body as much as it is figuring within the body. Or looking from within the tongue instead of upon it. To be the sinewy muscle pushing aside the hand which might attempt to enter, forming letters, somersaulting, demanding and determining a definitive uncertainty, free from anybody because the tongue is its own body. This very muscle is rendered in its full unruly shine in Collings-James’ 2014 glazed ceramic, Creep, part of her exhibition Choke On Your Tongue at the Italian Cultural Institute. Creep’s baby red orange tongue protrudes from a soft pink encasing, parabola shaped, flattening out as it moves downward. Somehow heavy and animate, Creep’s tongue is mid sentence. Parabola sides dotted with some sort of sickened chartreuse, collecting light to form mirrors; viewing Creep from the side you might see the outline of a body falling forward either in anguish or the preparation of some quasi-familiar ecstasy. She’ll do this again, in more sculptures—ceramic and otherwise—playing with questions of dominance, hierarchy and in particular setting up a line of inquiry around voids. Who makes an opening, with what tools and languages? How does restraint map itself onto the body (for whom and why?)? From what orifices are secreted those things that fracture our being and who was it that did the fracturing?

As Collings-James continues her long relationship with ceramics she also maintains within her forms and color an urgent sense of transformation, a sense that manifests itself in both the “finished” works and in her process. She reminds me again on the phone that her ceramics “still pop when they come out of the kiln.” Somehow they’re still breathing themselves into being. Her sculptures in their finished state begin a dialogue with beings whose sense of time and space do not so readily match with our own—beings like rocks and mountains, quarries and beaches. In And Know That Any Softness Is Strategic (2018), Collings-James places four glazed ceramics on two white corner shelves, one above the other; on the higher shelf she revisits a familiar shape, an equal arm cross or the balanced cross or the four seasons or the peaceful cross or the four winds. Time and language remain an endless playable scale for Collings-James, pushing things in and out of their ideal form into something more. On the lower shelf of And Know That Any Softness Is Strategic there are three gobstoppers, closed orbs, evidence of Collings-James going against the desires of the wheel upon which these works were rendered. The wheel would prefer to make a bowl, Collings-James would prefer to make something more internal, closed, or closing, altogether slippery and multifaceted.

Over the phone, Collings-James says to me: “What does it look like to take control of precarity?” What does it mean either by nature of being black, or being poor or being something which is seemingly “unstable” and to then attempt to harness it as something that will never really bend to a harness. Precarity struggles to be held in the hand or mind, it is a feeling that moves through the body. Its subjects and dominion are in a state of errant destruction, a round object balancing on another round object or the long tremors of bodies past that dwell within us and agitate us all. A meditation on precarity, M. Nbrouse Phillip writes in her poem, “Zong #4”: 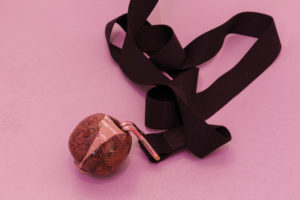 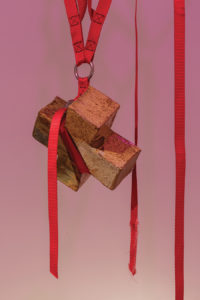 Collings-James mends this sentiment to her film Mother Tongue, Mother Master (2018). Filmed from her shoulders up, the artist wears identical little bells tied to the red plastic of a bag to hold some sort of citrus. Her face is lightly pushed inward by the bag, she begins slowly, tilting her head back, her neck balancing, she shakes her head and it becomes clear that there is a parallax or disjunct between the soundtrack which feels like a gathering of bells and her movements, yet somehow they feel completely connected. As she moves her head back and forth, forward and backward, moving the bells swinging in unsealed unison, it becomes harder to tell if she is drowning out the soundtrack or if it is drowning out her. She continues to let the bells move freely, continuing her gesture, opening and closing her mouth, feeling the weight of the bells and then suddenly, as the soundtrack subtly wanes so too does Collings-James, until finally, she takes off the instrument.

Whales communicate and find their way through the sea via echolocation. They send out a sound and it comes back to them, moving through a large mass in their heads. Arrogantly, scientists thought that whales constructed large mental maps of their environments, much like our version of sonar, but we know now that actually they possess a spare scent which is a form of emotional mapping. The sound that they send outward to receive or the sounds that they hear arrive in their bodies as a complete emotion, there is no translation, the feeling is transmitted and then felt all over. If someone calls your name you can feel the calling in toes, thighs, fingers and nose. They might say, “I call you, be in relation to me.”

CREDITS
All images
Courtesy: the artist and Arcadia Missa, London

PHOEBE COLLINGS-JAMES (b. 1987, London, UK) is a sculptor living and working in London. Her work has tentacles reaching symbiotically across mediums including ceramics, video and sound in order to explore the poetics and emotional detritus of violence, language and desire. Recent works have been shown at Studio Museum Harlem, Palais de Tokyo, Arcadia Missa and Wysing Arts Center, as well as artist-led projects and low-key interventions.

RINDON JOHNSON is an artist and writer. His sculptures and videos have been exhibited at museums and galleries in Europe, the US and Australia. He is the author of Nobody Sleeps Better Than White People (Inpatient Press, 2016), the virtual reality book, Meet in the Corner (Publishing-House.Me, 2017), and most recently, Shade the King (Capricious, 2017). He has an MFA in Sculpture from Bard College. Johnson’s writing and sculptures have been published by Artforum, Cultured, The New Museum and Rhizome among others.