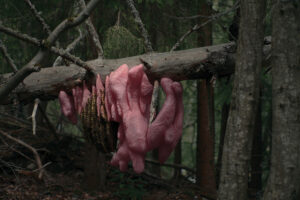 There are time ripples on this island. Monstrous mutations spawned by the patterns of algorithmic codes. A simulation of a milieu, replicated from a copy and set to grow, begins to create its own anomalies. Exiting the simulation, they appear in three dimensions, in materials of wood, wax, silicone, sugar, metal, sponge, or salt. Images from the past exposed to artificial neural networks become alive again in the present, contaminated by differentials which are fed back through the system in real-time. A network of hidden sensors drives a living image at the center of the forest: an image that sees, rather than shows, the conditions of its own existence. Variants—already a plurality, already differing from itself and other iterations of itself. Its purpose is to replicate, mutate and survive. Like a virus.

Through birch and spruce, the path winds down to the waters below. From the bridge, a small structure is visible, jutting out of the riverbed. A casual eye would miss it. Maybe a foot high and from this distance resembling something like a displaced termite nest, it seems to both belong and not belong to its milieu. A glint of sun reveals texture: metal, with the patina of rusted iron. An incongruent construction inserted into the natural landscape. But this landscape is not natural, either. The bend in the river was created by the workings of an old paper mill and is subject to intermittent flooding by the opening of a dam upstream. At certain times of the year, this path, the banks, the stones, the island itself, are submerged. I think of the metal form beneath the waters, persisting unseen in some projected future. The entire site is an ecology after nature, crossed by human and more-than-human rhythms.

When Kistefos approached Pierre Huyghe to create his largest permanent work to date, Huyghe chose this island as the foundation.

“I was looking for an entity, constituted of different milieux, that could react, generate, and I was looking for different intelligences at play,” he explains. “One milieu was given: the natural. I wanted the actual to host a possibility of itself.”

The first step was to scan the entire site. Trees, logs, fungi, the bits of metal detritus washed up on the shores, every detail was captured in virtual space. Through machine-learning technology, the simulation began to digitally create its own forms out of what was already present. Some of the mutations were then physically generated and integrated within the island. The odd-looking metallic mound I first spied from the bridge, for example, was not designed by Huyghe, but the result of algorithmic agents morphing new forms derived from existing elements on site.

Elsewhere in the forest, one might come across a row of mounded ants’ nests together with more of the weird metallic extrusions; a coral-like sponge in the middle of an algae-filled pool; a decaying fox, its bones and fur matted into the soft dark earth beneath; a reindeer skeleton; bright pink beehives hanging from tree branches; transparent silicone fungi tucked into logs. A strong hyperattention to the environment is cultivated, pushed in part by a drive to hunt out what has been added to the milieu, but also through the similarities and dissonances between new forms and existing habitat. Anyone who experienced Huyghe’s Untilled or After ALife Ahead would be familiar with this sensation of hyperattention, as these works also radically overturned aspects of agency and intentionality among human-non-human relations. 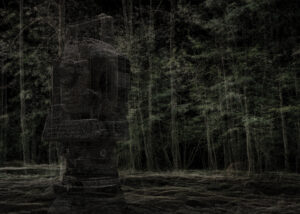 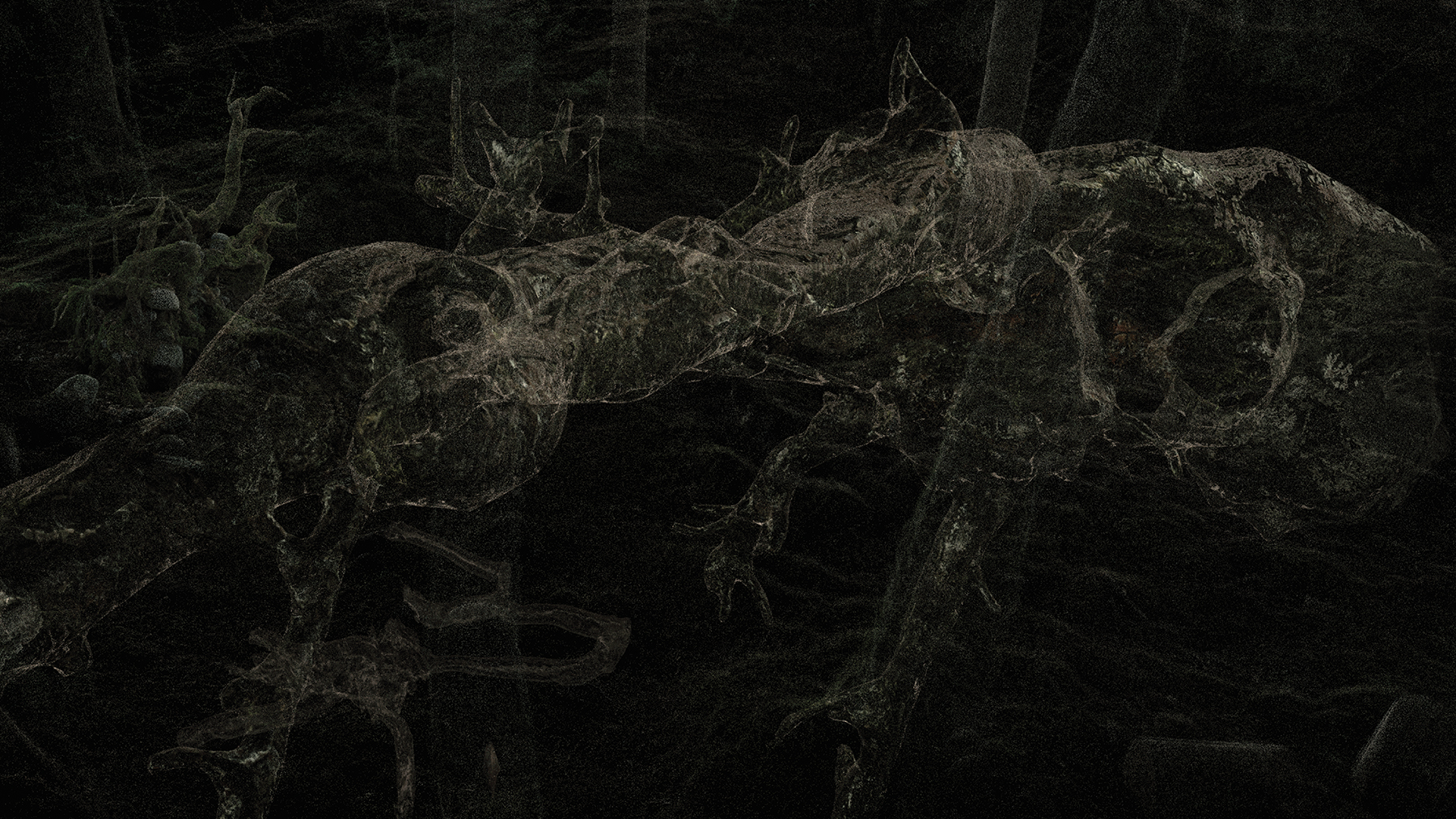 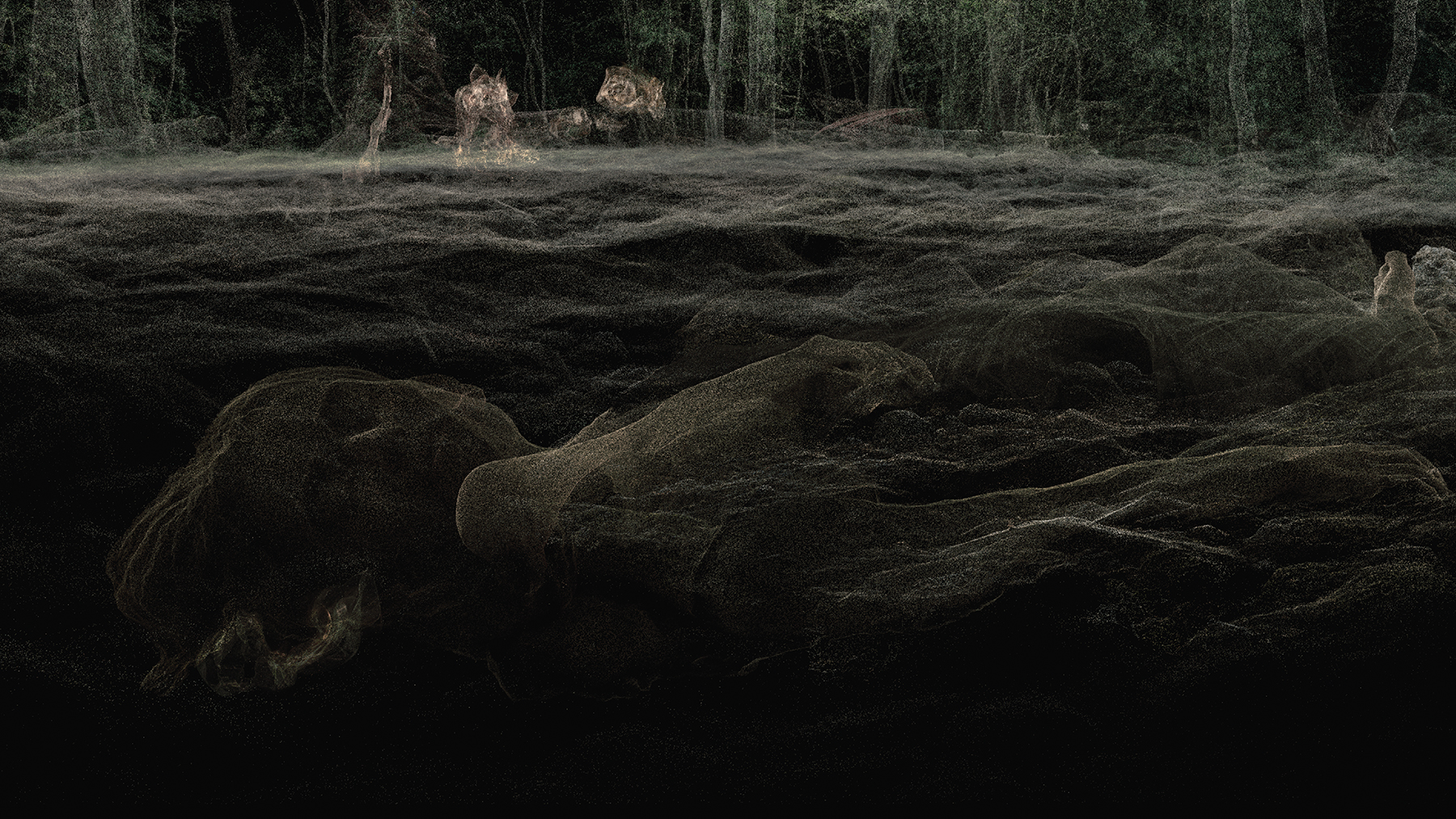 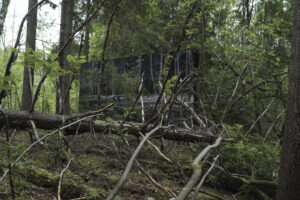 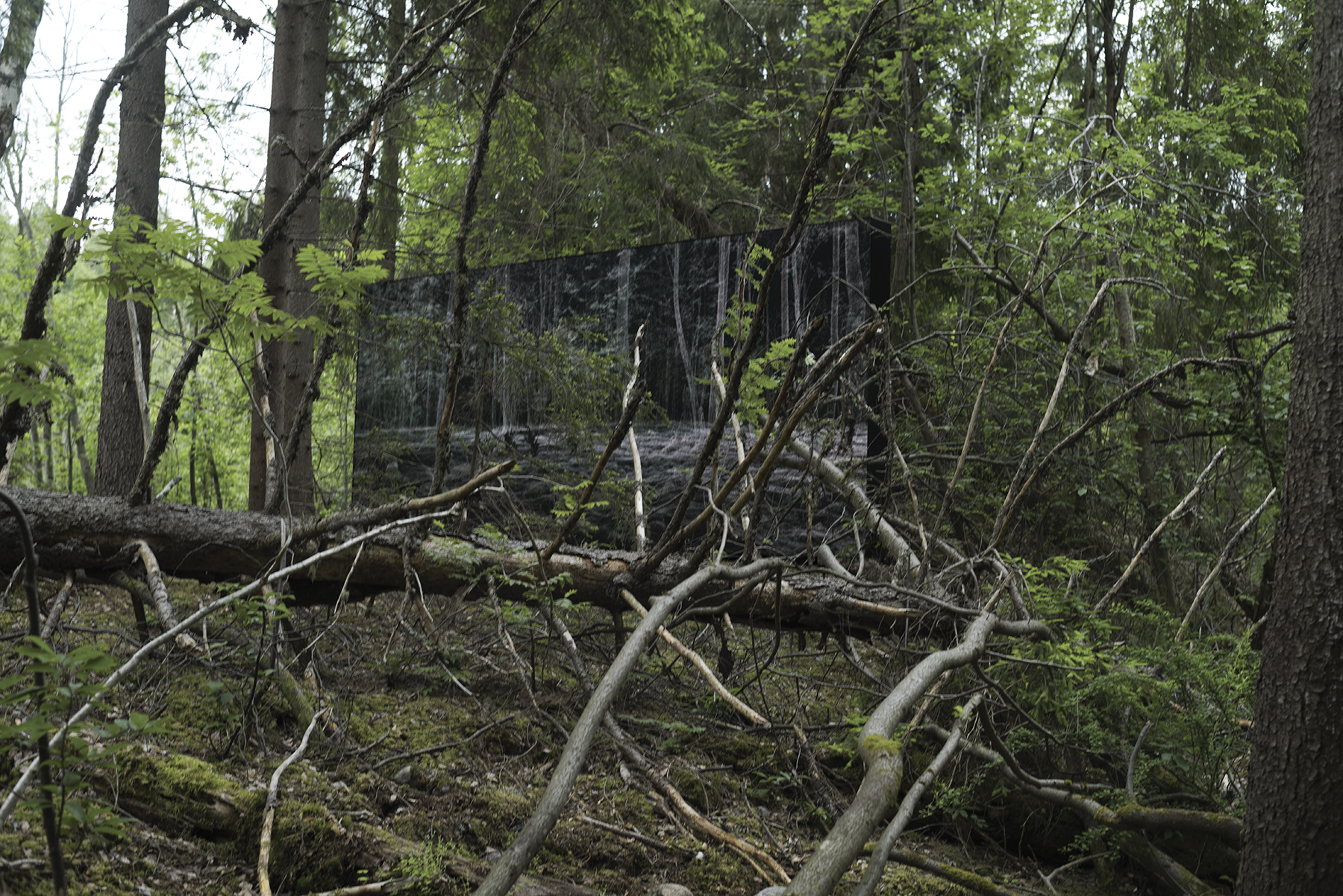 The path through the work terminates at a large screen on which appears the scanned island. The footage is spectral. Greens and blacks and occasional glowing pinks, a haunting exposé governed by a mechanical, indifferent eye that scans and zooms through the virtual milieu as if seeking some unknown target. The inside of a log, a tree, the deer skeleton, fungi. A procession of forms both familiar and unfamiliar from the walk through the forest. At one point the body of a human appears—perhaps dead, perhaps sleeping, although no human equivalent is visible on the land itself. Surfaces become volumes, interior spaces penetrated and exposed, stripped bare of coverings.

However, this is not a static recording of a scanned environment but is instead a live construction, fed by data from sensors camouflaged around the island that track biochemical and climatic activity: temperature, light, humidity, water levels. Shifts in the physical realm impact not only the way the environment is ‘seen’ by the camera’s eye (what it focuses on, at what speed, when), but also influence the growth or decay of the mutations within the simulation itself. We are at the center of a complex surveillance machine in which the entire landscape is monitored and translated. The primary effect of this realization is paranoic.

Philip K. Dick, perhaps one of the most paranoid writers of the 20th century, once wrote that “the ultimate in paranoia is not when everyone is against you but when everything is against you… [when] objects seem to possess a will of their own.”[1] For Dick, paranoic vision is generated at the moment that agency is located outside of living forms, in the inert realm of technology and things (the television is sending me messages, the phone is spying on me). Discourse around AI and machine learning abounds in paranoid critiques, the technological singularly being the cumulative end point: the moment at which machines will surpass the cognitive abilities of humans. But Huyghe’s ‘eye’ is not malicious, even though its scanning has the uneasy, insectoid aesthetic of militarized inhuman vision. It does not care, or ask us to care. A system built from Diffusion, GAN models, L-Systems and generative modeling, the intelligent camera is locked in perpetual negotiation with a host of unpredictable forces. 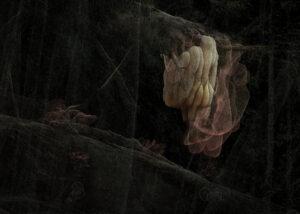 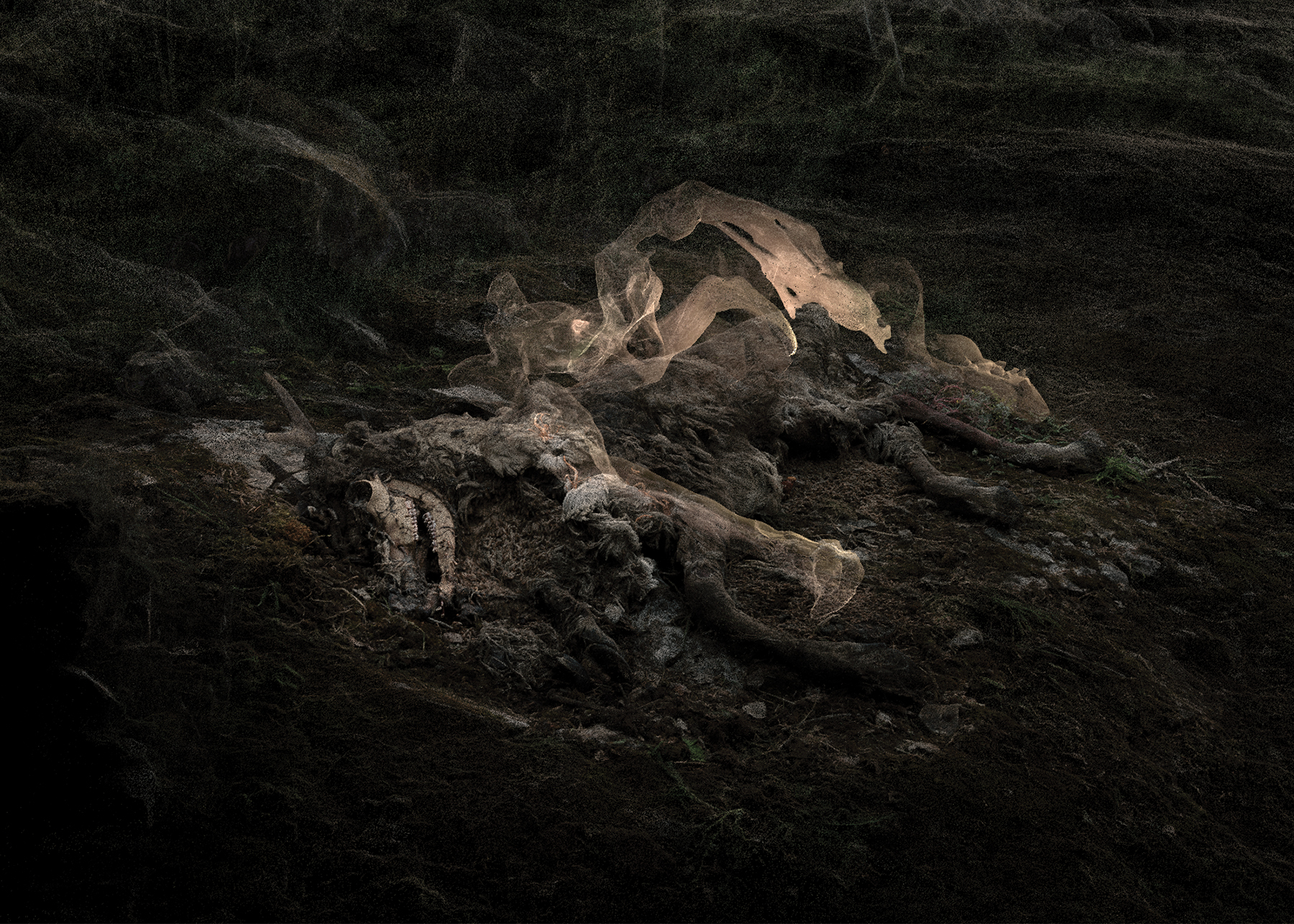 To return to Huyghe: “I wanted the actual to host a possibility of itself.” This is not a blurring of reality and fiction, but a pitting of reality against reality: the programming being no less fictional than the island, the island being no more real than the simulation. If Huyghe’s other works created interruptions between an event and its screen-based representation (such as the gaps between film and live situations embedded structurally in works like A Journey That Wasn’t, or The Host and the Cloud), here the screen and the event become one. They constitute the same viral ecosystem, each contaminating the other, persisting even after human access is cut off by the inevitable coming of the floods.

It is not until the walk back through the forest that the significance of this hits. Unlike the approach, which was marked by a curiosity and a heightened attentiveness, the journey away from the center is plagued with déjà vu, insecurity, and paranoia. Fused with the memory of what we have been shown on screen, interior spaces suddenly open up: a tree or log seen earlier is now oddly meshed with the knowledge of what it looks like from the inside, gleaned from the digital probings of the camera’s eye. Details that previously went unnoticed are sharpened. Near the end of the trail, I hear bird song overhead. “What kind of bird is that?” I ask. “That,” Huyghe confesses, “is the sound of a bird, recorded on the island and played back mutated in real time in the space it was captured. You can’t see it, but the whole island is a mesh of cabling.” It is true that I can’t see it. I feel at first ungrounded, then the weirdness of the positive element of paranoia kicks back in: a compulsion to question, pay attention, become hypervigilant, alive to the details, to take in both what is there and not there. To care. To weigh up what makes matter, matter, and to what end. 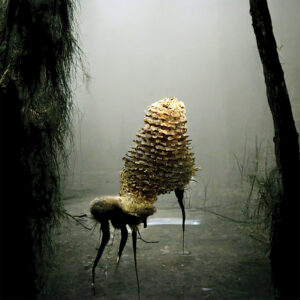 Pierre Huyghe (b. 1962, Paris, France). For Huyghe the exhibition ritual is an encounter with a sentient milieu that generates new possibilities of co-dependence between events or elements that unfold. The exhibition is an entity whose time and space, in which it appears, are constituents of its manifestation. His works are conceived as speculative fiction and often present themselves as a continuity between a wide range of intelligent life forms, biological, technological and tangible inert matter that learn, modify and evolve. They are permeable, contingent and often indifferent to witnesses. Recent exhibitions include: Variants, Kistefos Museum, Jevnaker (2022); After UUmwelt, Luma Foundation, Arles (2021); UUmwelt, Serpentine Gallery, London (2018); The Roof Garden, Metropolitan Museum, New York (2015). In 2012-2014, a major retrospective of Huyghe’s work traveled from the Centre Pompidou, Paris, to the Ludwig Museum, Cologne, and to the Los Angeles County Museum of Art.

Amelia Barikin is an art historian who currently works at the University of Queensland, Australia, and is the author of Parallel Presents: The Art of Pierre Huyghe (MIT Press, 2012).