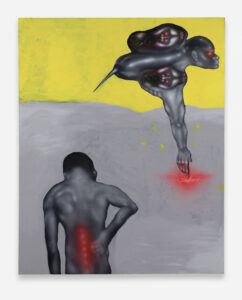 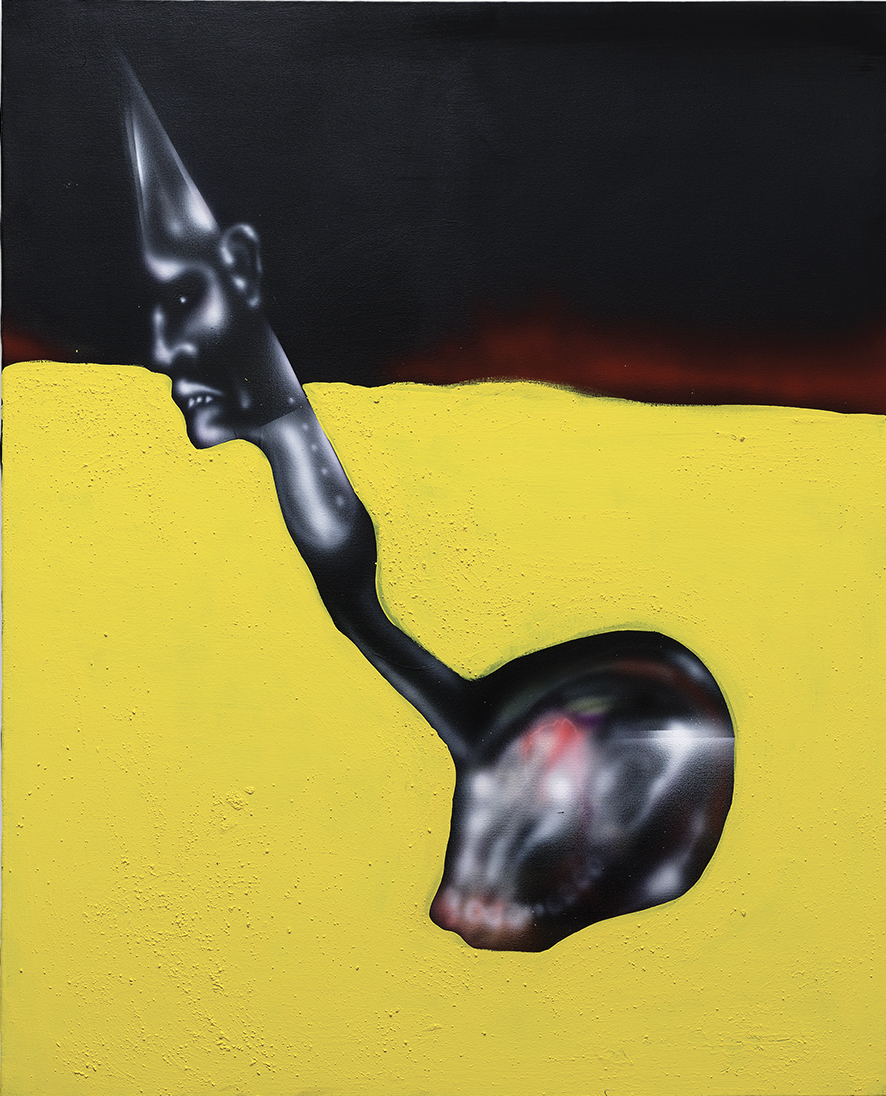 The multilayered work of Pol Taburet brings together an expressive imagery enhanced by chromatically vivid tones of primary colors, depicting floating shapes and spectral shadows influenced by voodoo mysticism. Combining an academic painting background with a deeply do-it-yourself and experimental style, Taburet breaks hierarchies and conventions, and appears as one of the most promising young French artists of his generation.

Pol Taburet’s possessed canvases figure a personal mythology where transformations and oppositions seem to be a point of departure. Paradoxical themes, such as life and death, or softness and violence, dance a wild tango on his canvases, and are expressed through the passage and transformation from one to another. On a purely pictorial level, he pushes the boundaries of what seems solid and what feels vaporous, both reflected in his use of airbrush and acrylic paint. This enables his works to convey a contrast between a thick and lumpy background and a misty surface, facilitated by the airbrush. In an attempt to bypass the traditional depiction of perspectives, Pol Taburet indeed uses several painting techniques to hierarchize different levels, perspectives and elements on his canvases. Beside paint, pastel or airbrush, he applies a DIY technique that he conceives and experiments himself, a paste made of 90 percent alcohol mixed with resin that creates a thick base. When it comes together, one sees three superimposed layers or distinctive realities unveiling at the surface: a background made of heavy paste that frames the image with a solid base, then objects or textiles depicted with a lighter layer of pastels that evoke a more traditional use of paint, and finally bodies represented with airbrush. Conceptually, he seems fascinated with the way the subjects or bodies he depicts are transformed into hybrids creatures—often humans that recall animals or plants, as in Holy Cruel Engine (2021) where a pointed head floats above what seems to be a dog with an almost human rump. Taburet uses color, and particularly shades of black and green, to express the humanity or bestiality of his creatures. Comparably to Francis Bacon’s troubling depiction of reality, such as in Three Studies for Figures at the Base of a Crucifixion (1944), Taburet’s howling and grotesque bestial forms melt onto the contorted flesh of human figures. Distortions of faces and hands also bring to mind the aesthetics of American cartoonist Robert Crumb or some popular cartoons from the 1990’s, such as Family Guy. The grotesque in the artist’s practice is reiterated with the theatrical silicon black masks that he presented at Art Basel Miami in 2021 alongside his paintings, and that felt like a surrealist performative extension of his two-dimensional works, as if inspired by the set of a teen horror movie. 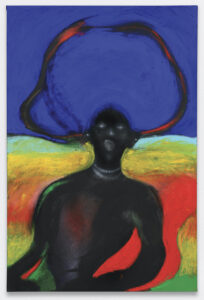 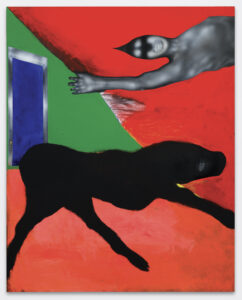 Spirituality lays at the core of Pol Taburet’s imagery, as he draws his inspiration from Afro-Caribbean mythology and Guadeloupean oral culture, specifically tales transmitted by his mother, grandmother and aunts. The presence of spirits and phantomic characters is noticeable in his exhibition Opera I, presented in 2020 at Balice Hertling gallery in Paris. Here, the importance of spirituality takes many forms of beliefs, both in the process and in the outcome of the paintings. One of them is named Balmyard (2020), a place where, in Caribbean culture and prominently in the French West Indies, healing rituals would happen. Another one is entitled Fromager (2020), a sacred tree that occupies a particular place in Caribbean popular and oral culture, and that is referred to in tales of ancestral spirits, while its leaves are used for medical purposes. His amorphous and luminescent figures seem to be inspired by quimbois, the Guadeloupean voodoo, especially the figure of the soucougnan, a supranatural creature reminiscent of a female vampire and taking the shape of a ball of fire or a black bird. Soucougnans are also related to the Fromager tree, and the legend says that they take their skins off at night and hang them on the tree’s branches. Looking at Taburet’s canvases, one also witnesses the irruption of light, through the shiny eyes and the sparkling metallic mouths of the depicted characters, and through almost divine lightning and thunderbolts. Here the artist’s approach can be perceived in the continuity of the writings of Martiniquais philosopher and poet Édouard Glissant, who coined the term “creolization” to define the blending of different cultures and human experiences in the West Indies that resulted in a new base for a common culture, language and iconography.

Furthermore, the practice of Pol Taburet draws references to popular culture and specifically American trap music, a subgenre of hip hop and a cultural movement that originated in the suburbs of Atlanta in the early 2000s. More than a musical trend, it is a societal statement about the failures of capitalism as its lyrical themes revolve around the culture of the trap house, a building originally used as a base from where drugs were sold or sometimes manufactured, and that has become a metonymy for the life in the ghettos of the Dirty South. Evoking the importance of the symbolic space of the trap house with its violence and eroticism, some of Taburet’s works convey the rough atmosphere that can be found in the music of rappers Gucci Mane or Young Jeezy, as in Strippers, Joint and Percocet (2021), where the flying muscled leg of a stripper wrapped around a pole bar faces a smiling face ornamented with metallic grillz. The strip-club and the grillz are two core elements of trap culture. Taburet’s compositions also reflect a feeling of claustrophobia, or of being trapped in the trap house, through superimposed perspectives and the depiction of places of passage such as doors and windows, like in Buried On A Sunday (2021). A zoomer born in the mid-1990s, Pol Taburet is the product of a generation of digital natives, whose cultural approaches combine digital technology, social media and a wide knowledge of contemporary culture naturally connected to other creative fields such as music, fashion or digital content. Under the alias of Yves Ciroc, he collaborates with the French music collective founded by Emma DJ and produces their music videos that bring together electronica with rap. This raw and free energy of the night-life and club culture feels tangible throughout his practice and appears as an Ariane thread that connects the constellation of his works. 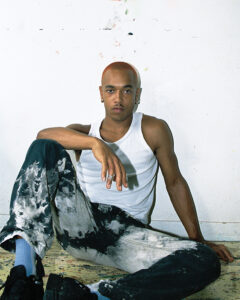 POL TABURET (b. 1997, Paris, France) lives and works in Paris. He exhibited his works at Balice Hertling Gallery, Lafayette Anticipations and C L E A R I N G New York in October 2022. Pol Taburet’s work is part of the Pinault Collection, Paris and Venice.

MARTHA KIRSZENBAUM is an independent curator and writer based in Paris and Los Angeles. She was the Curator of the French Pavilion of the 58th Venice Biennale, represented by Laure Prouvost. She has held positions at institutions such as MoMA, New Museum, Belvedere Museum / 21er Haus and Kunsthalle Mulhouse.