Precious Okoyomon. sit, paw, die in the bag of the world 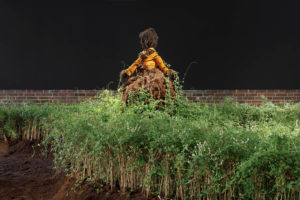 Precious Okoyomon was born via miracle, transmitted after just five months in utero directly from the cosmos into our world where we are individuated and stand in our bodies on street corners waiting for the pedestrian signal to change from red to white. Their companion animal is a small white dog who as a tiny puppy wore diapers and was hand-fed human foods. Thus the dog has a supernatural wisdom also born prematurely from the intimacy between animal and language, the basic condition of the dog brought to a supreme intensity in this particular one. Rainbow knows three words: SIT / PAW / DIE.

From red to white Precious walks in the street with the dog stuffed in one of the enormous Telfar bags that punctuate the days of our scene like exclamation or interrogation marks, Bag! Bag? and will one day be a set decoration marking an era, if TV lives that long. In terms of lifestyle and aesthetics the earliest part of the decade is just a continuation of the last, until we figure out how to lurch further into the void of form, the form of the void. I am always saying, Precious Okoyomon invented cottagecore, but they say, I am just from Ohio.

Precious is always trying to get me to eat dirt and insects and I say no, no, my mouth is pure, it only receives things I love, I respect bees but I don’t love them. I know I am in the wrong on a cosmic level but on an earthly diurnal level I am saddled to the whims of my gut. Precious eats flowers, ants, ghost peppers, worm salt, ceviche, acai, egusi, unpasteurized milk.

Within the body of the artist all the animals and plants are digested and transformed into thought. 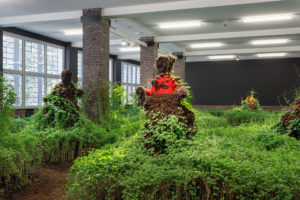 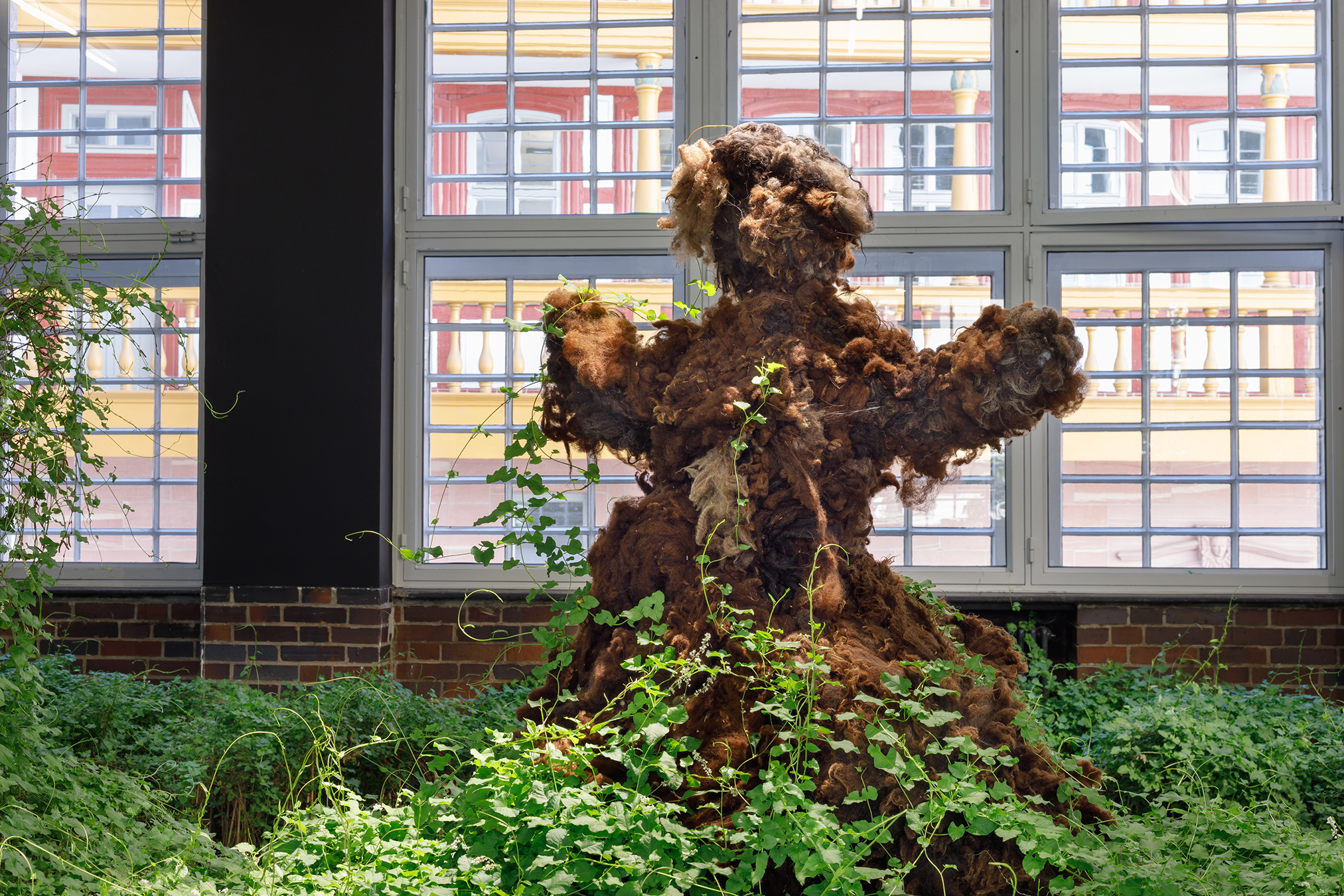 They strive to tolerate lactose, though it causes them pain. They are the Jesus of lactose. They were raised Catholic. When milk hurts them, they turn the other cheek.
Proto-Precious, calculating minimum gestation on the abacus of DNA, moved worm-like through the nutrient-dense soil of the one dead god, planning ahead for a jacket in spring weather in Brooklyn with words on the back, BUT DID YOU DIE? I follow behind holding Rainbow in my arms like a baby, reading and reading the question. The answer is Not Yet or I Don’t Know or Yes Constantly or No. If I put the dog down, he stands on hind legs and begs to be allowed back into my arms. The white queers are driving us crazy, that is their historical task and mine is to interrogate the dog: Are you the sweetest angel, are you? Bag?

Today my predominant image of the artist is an early performance work drawn from their recollections—a memory of a lonely childhood attic coated in pink insulation foam. That hard-sprayed toxic protection would later in memory resemble the clouds of gay heaven, but at the time the artist was alone (in gay heaven, alone is never). Having come directly from the inchoate godly living and dead material of being in half the customary gestational time, as a child the artist was in a condition of permanent astonishment. I see it in the photographs. The attic surrounds her, its cloudy materials leaking asbestos and the fixative of an always-remembered incident that shadows the professional and personal life, following these lives within lives around.

In a Russian fairy tale adapted for the 1980s children’s TV show Jim Henson’s The Storyteller, a soldier coming home from a long war gives away his last remaining morsels of food to three beggars. In return he gets a magical bag. To save the tzar’s life, he summons Death into the bag—he has no class sensibility and no common sense. For months, no one dies. The old and sick are frozen in what should have been their last suffering. The soldier lets Death out of the bag. Death goes about the world doing its business, but it is too afraid of the soldier to approach him, and so the soldier cannot die. He wanders back and forth between heaven and hell for eternity, asking to be let in.

Precious’s recent show at MMK in Frankfurt was based on prayers from Octavia Butler’s Earthseed trilogy. A religion of the principle of change is dreamy, but what I liked best about that book is that the central protagonist, Lauren Olamina, is really great at packing a bag. Like a creature that springs from an egg, Lauren is always getting busted out of buildings by disaster, the auditory form of her life resembling a cacophony continually flourishing around a steady note of self-created order. There are detailed and loving descriptions of the emergency bag with tools, food, clothes and money that she keeps ready to go in the gated community of her childhood that she knows to be impermanent. Later she and her friends carry their survival stashes in packs: medicines, dried meat, clean water. A well-packed bag is like the tomb treasures intended to solace the dead in the afterlife. We are on Quincy loading Precious’s eight or nine bags into the car. When someone leaves in pandemic time it’s like we are living before airplanes and everyone travels laboriously, sometimes eternally, by boat.

In Kindred, Butler’s time travel novel, Dana Franklin ties a bag to her waist to have with her as she falls through time and lands, where else, on the plantation. Ursula Le Guin said of fiction that it was like putting a bunch of things in a bag: “If it is a human thing to do to put something you want, because it’s useful, edible, or beautiful, into a bag, or a basket… and then take it home with you, home being another, larger kind of pouch or bag, a container for people, and then later on you take it out… if to do that is human, if that’s what it takes, then I am a human being after all.”

The body is a bag and the world is a bag, and so on. The museum is a bag. The artwork is a bag.

Small objects are taken out and put back in all the time, to be ready for some grand emergency that will stand the world on its hind legs. Things go missing in the bag of art or the world, keys or cigarettes, whole concepts, a tiny white dog. Weeks later when you find them by accident while looking for something else, you are pleased to realize that although fundamentally you will not get what you want, very little, after all, is ever lost. 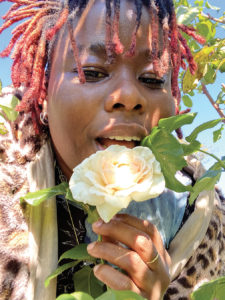 PRECIOUS OKOYOMON (b. 1993, London, UK) is an artist and poet living and working in New York, NY, USA. They have had solo and two-person exhibitions at: Real Fine Arts, New York; Quinn Harrelson / Current Projects, Miami; The LUMA Westbau, Zurich; and the Museum für Moderne Kunst, Frankfurt. They are currently an artist in residence at the LUMA Arles.

HANNAH BLACK is an artist and writer. Her work is currently on show as part of Manifesta 13 and the Busan Biennial. Recent solo shows include Ruin/Rien at Arcadia Missa and Dede Eberhard Phantom at Kunstverein Braunschweig. She is the author of two small books, Dark Pool Party (2016) and Life (with Juliana Huxtable, 2017). She lives in New York.