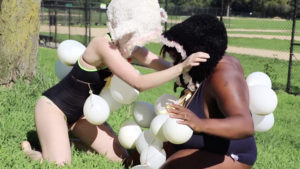 My mother calls me

Driven to find the poetic substance of materials and spaces, Precious Okoyomon works in sculpture, moving image, and words in a practice of re-embodiment and ludic catharsis, whose tender gestures often pair with visceral critical inquiry. The inevitable horizon of death and decay—and the celebration of the fact that from this horizon all life springs—serves as a central focus and impetus in Okoyomon’s work, inviting the reader into a space of morose play where aesthetics of the cute register abjection, destruction, and aggression. In an interview with the Creative Independent, she states that her writing is “just me trying to boil down my gibberish and self-recriminations into some destruction and rebirth of me trying to give flesh to my memories.” There is a similar distillation in the visual component of her practice, which points to her poetic approach.

In a 2018 duo show with Hannah Black at Real Fine Arts (NYC), I NEED HELP, the artists collaboratively ‘digested’ Black’s Chisenhale show (Some Context, 2017), shredding copies of the text Black generated for that show and producing objects such as teddy bears stuffed with book shreddings; a pile of raw wool dolls, dirt, and shreddings; and a sphere made of wool, clay, and shreddings, pasted around bright, red projected lips which discuss geological processes of toxic sedimentation. By treating citation as a gastrointestinal metaphor or context, the show links abject aesthetics with community-oriented politics “based on the underlying and frankly disgusting processes of rot and collapse that have produced the dirt from which everything grows.” Hannah’s text, itself a compilation of anonymized conversations with other artists, becomes a frame to think futurity. The objects are not ruins, but they exist in a transitional state, yoked to traces of ruination and damnation while nevertheless glibly hopeful.

In her 2019 LUMA Westbau exhibition, A Drop of Sun Under The Earth, Okoyomon engages with Afropessimist ideas of social death and the destruction of Black bodily integrity. For Okoyomon, the social death of Black Americans registers as an angelic status, and she fills the Westbau schwarzescafé with trees from which hang stuffed animals with taxidermied bird wings attached. Cotton rains down occasionally from a machine built on-site, referencing Christina Sharpe’s idea that antiblackness is the weather—that is, just as pervasive, invisible, and central to western life. In an allusion to 18th-century lantern laws in the US—a keystone for modern surveillance culture which required Black, mixed, and native New Yorkers to carry lanterns after sunset unaccompanied by whites—black resin covers the space’s hanging globe lamps, like perverse worlds orbiting the lynching sites. A single-channel video shows an animatronic bear smoking a blunt, narrated by Okoyomon’s brother describing violent encounters with American police. 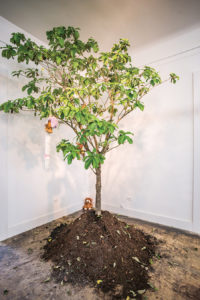 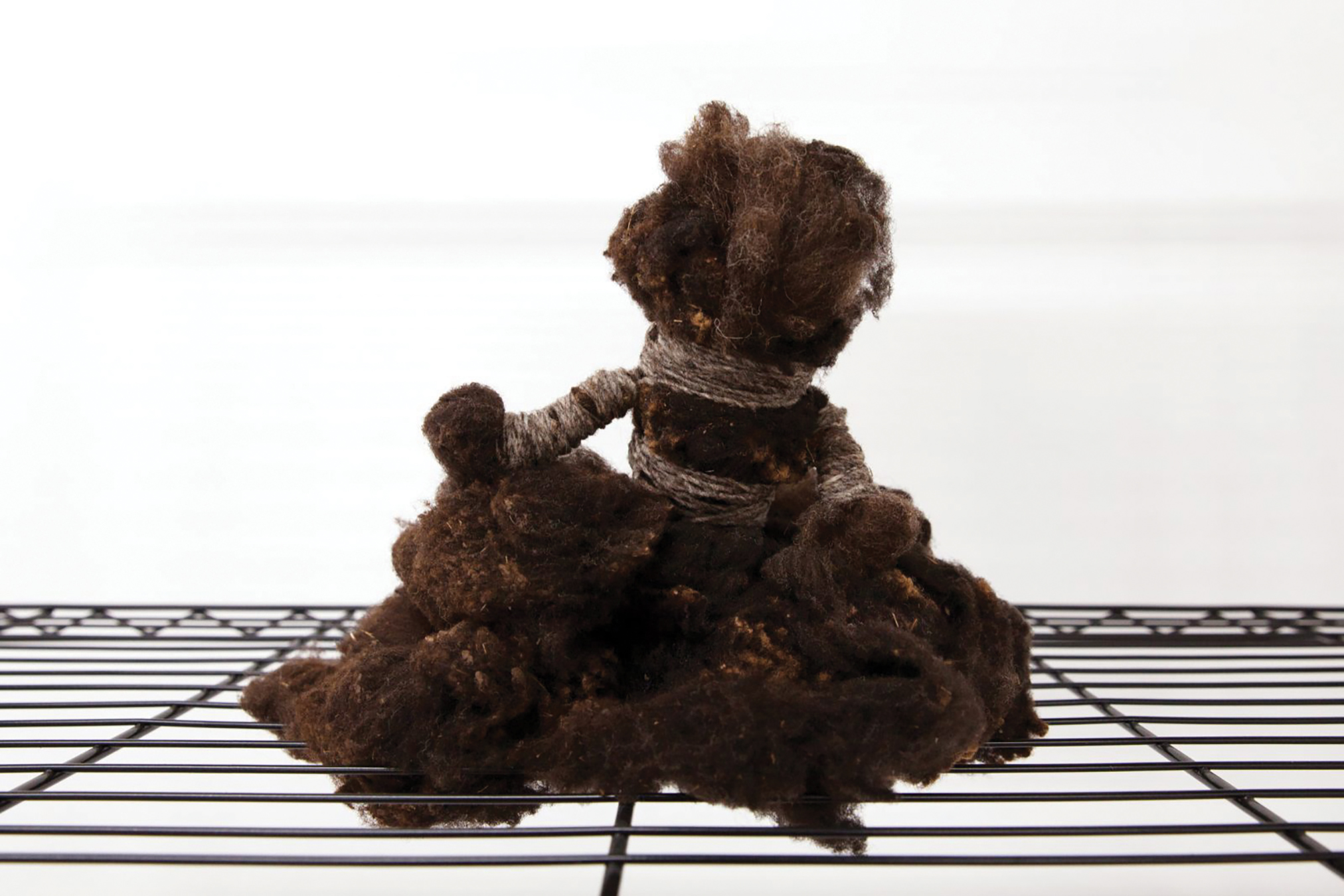 The didactic heavy-handedness almost threatens to overtake the twee gestures, and the tension here is on purpose.

Just like the sun is too beautiful to be looked at, a world without antiblackness is too beautiful for most, and this is sublimated into the encounter with antiblackness itself, which the West would rather continually defer, thus perpetuating the evil. Put another way: for most, it is easier to imagine the end of the world than to imagine the end of antiblackness, but really these are one and the same. In the video’s narration, the animatronic bear emphasizes that he was “in the wrong” in the police encounters, but that his life still matters despite his criminalization. Okoyomon demands the right for Black people to be evil, playful, ironic, and other complex affects which global antiblackness flattens. For Okoyomon, if social death and hypervisibility are a given of Black existence, then she has the right to do whatever she wants, to destroy the world as it exists in order to make space for something new in an ancestral process of creative decay and attrition which has its roots in the holy loam, sickened with oceans of blood across the ravaged epochs of time.

With such iterative gestures, Okoyomon is trying to initiate a kind of discursive play with the audience, rendering the visual experience into a call-and-response. Rather than reduce her work to political didactics, Okoyomon instead suffuses the situation of antiblackness into the objects, demanding we engage with our own complicity in the global structure of violence against Black people without acquiescing the morose, poetic sensibility that is a fabric of the contemporary scene. The discomfort of this dual demand registers as crisis to some audiences; for example, rather than engage the history and present of Spanish colonization and antiblackness, some members of the Madrid audience claimed animal cruelty with respect to Okoyomon’s inclusion of living butterflies in a greenhouse-like sculpture she constructed for a duo show with me at Yaby project space. They immediately latched onto this narrative rather than face these brutal legacies and their afterlives as they carry them today in their hearts and lands. It was almost choreographed, and really drove home the cognitive dissonance and devaluation of Black life, Black thought, and Black aesthetics that powers the West.

Presented at LUMA Westbau in their most developed form, some of these gestures originated in previous shows. For example, the plushies hung from trees can be seen in Okoyomon’s duo show with Puppies Puppies at Current Projects (Miami), a project space directed by Quinn Harrelson. A cotton cloud hangs in the middle of the space. And for her contribution to a re:trospective, a group show I curated with Re: Art Show at the Old Pfizer Factory (Brooklyn), Okoyomon collaborated with 80881 (Bobbi Salvör Menuez) to project performance documentation video onto a cotton cloud. Under the cloud they laid a tarp depicting the Earth over a floor drain, surrounded by dried leaves and mulch. Small clay bears sprinkle the floor, and on the wall behind the projector Okoyomon smashed a hole and installed an early version of the stuffed animal with taxidermied bird wings featured in her LUMA show. The plaster dust, fiberglass, and other wall guts from the process are left to frame the hole. The stoic quality of the plushie and clay figures juxtaposes with the scenes of laughter and play projected on the cloud.

Objects, concepts, and processes with ancestral significance serve aphoristic functions in Okoyomon’s practice. These aphoristic gestures draw an arc of inquiry across the different facets and iterations of her work, such that each iteration is part of a larger conversation. The cute aesthetics of the work invite participation in this conversation, yet they retain an inalienable and grotesque distance in a gesture of self-protective obfuscation whose irony combines the sardonic and the hedonic in equal measure. Her career holds great promise.

PRECIOUS OKOYOMON (b. 1993, London, UK) is an artist and writer living and working in New York. She attended Shimer College in Chicago. Her work was included in the 13th Baltic Triennial, and in a two-person exhibition with Hannah Black at Real Fine Arts, New York. Okoyomon has read at The Kitchen, New York, Artist’s Space, New York, and The Serpentine Galleries, London. Her work is included in the permanent collection of the Rubell Family Collection. Her first book of poetry, Ajebota (2016), was published by Bottlecap Press, and her second book, But Did U Die?, is forthcoming from Wonder Press in 2019.

manuel arturo abreu (b. 1991, Santo Domingo) is a poet and artist from the Bronx. They use what is at hand in a process of magical thinking, with attention to ritual aspects of aesthetics. Recent projects/discourse at MoMA and MoMA PS1 (New York), AA|LA Gallery (Los Angeles), Yaby project space (Madrid), Yale Union (Portland), Centre d’Art Contemporain (Geneva), and Rhizome + the New Museum (online). They wrote two books of poetry and one book of critical art writing. abreu composes club-feasible worship music and crunchy ambient as Tabor Dark. They also co-facilitate home school, a free pop-up art school in Portland, OR.