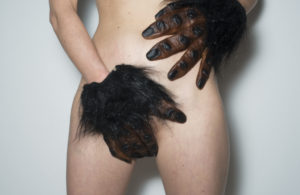 An air of absence lingers in Rebecca Ackroyd’s work like a ghost, reflecting on a time, a bygone era, probably preferable to current times. Her multifaceted art practice encompasses sculpture, drawing, architecture and writing. Interested in the physical connection to loss and absence, she explores construction or misconstruction of cultural and national identity. She erects derelict spaces, imbued with real contexts, recovering the role of the abandoned as a way of raising awareness and consciousness to the forgotten, the path that could have been taken, the road that could have been sketched.

Ghosts, spirits and shamans seem to inhabit her world. Ackroyd often creates immersive installations where large, out of scale, human sculptures are immortalized in contemplative or resting positions.

These over-sexualized or desexualized figures are clad in motorbike helmets cast in wax or metal sunglasses, which provoke unclarity as to the gender of their dehumanized body. Smaller sculptures made of papier maché depict crumbling animals which don’t belong to this planet. The crafted environments hosting the creatures often look like empty spaces where only casts of a preexisting species are left. Trauma reverberates throughout the artist’s sculptures and drawings as the materialization of absence that occurs when one object or idea is translated into a state of abandon. Affected by banal objects and personal items, the created worlds unleash a feeling of disappointment towards humans and the belief systems and realities they eradicated. While looking at it, we find ourselves wondering if we ever made the right decision.

History and personal life melt in her research and language plays a fundamental role in it. When remaking and representing an existing object, Ackroyd aims to redefine it, to drain it from meaning or to create a new meaning. “When people translate languages, I think about what gets lost, what fragments of words become scattered. What makes it through the rough version becomes the bones of the meaning, the main point and how it is embellished becomes the flesh. The term ‘broken English’ always makes me think of words as glasslike, shattered and fragile like a physical object that’s been dropped, smashed, destroyed. When I’m making work, I am gluing these shards back together to construct some kind of fractured sentence that perhaps will or won’t make sense, but it’s what is left out that is as important as what remains.”

Through the study of how maiden names are passed through a family history and erased through marriage and time, she examines lost female history. As with names, architecture is imbued with its own sense of inherited meaning. For the artist, a derelict building holds all the energy of its past within its walls, there is an unseen narrative that gets rewritten with each new inhabitant.

She examines how architecture provides a physical experience of another time and how that changes depending on who occupies it. Metal shutters, which hang directly on the wall of the gallery, represent an important part of her body of works. These doors should have been paths into stores, garages and houses but are clearly uninhabited sites, which resonate with the industrial area in south London, where the artist’s studio is situated, and the streets are lined with shutters, battered and sealed shut, punctuating the streets with NOs. The idea of access or perhaps more being shut out is wrapped up in the current political chaos in the UK that has forced the notion of national identity upon some British citizens and instills a sense of loss or erasure of self that is out of their control. The shut gates symbolize places once available, and now unreachable or abandoned ideas and utopias once prominent in our culture but which failed to survive. Stoned in beliefs and behaviors, they awake an awkward will to reopen and restructure them and simultaneously a sentiment of unrealized dreams, an absence of possibility to ever be able to regain that momentum. Without directly referencing melancholia, these architectural structures embody this primordial feeling and generate in the viewer a sense of impotence that makes him/her circuit in a state of wondering, questioning his/her role in society and the implications of the current political situation.
The concept of belonging, escapism and the fragile construct of what we call home are recurring themes in the artist’s work with the creation of immersive simulated worlds that transform exhibition spaces. At a time when a looming global climate crisis threatens life on Earth, her attention has turned to the construction of a more blended definition of home, which embodies several paradoxes of today’s society: people who will not leave their war-tired apartment despite the danger, undistributed wealth from shifting homes and temporary accommodation to shelters and homelessness, while in London the number of people living on the street raises at the same speed as the number of luxury flats that are hastily constructed. 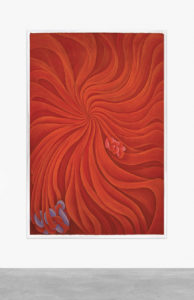 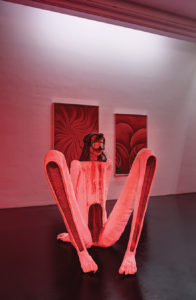 For her home “is full of sentimental value and memory. We are all borrowing the space we inhabit, taking care of it and I suppose this has made me think of the transience of our inhabitance, how much are we in control? Probably not as much as we’d like to think. Nesting and settling down, growing up and growing old.” The pieces are created as a whole, they belong to a predesigned installation environment, which is as important as the artworks themselves. A distinct feeling within the space is created by the plastic greenhouses, wallpapers and specific light designs, which enhance the messages the works embody.

Drawing is another fundamental element of Ackroyd’s practice. It is where it all starts. Without necessarily knowing where her hand will lead her, the medium allows her to explore non-physical space. The pastel hair drawings represent enlarged densely colored matted landscapes both abstract and figurative. These signify a marker of time or identity that grows and changes even for a time after death, like visceral time lines. “I incorporated numbers, dates, words into the hair intertwining them like bulbous growths or pieces of stuck chewing gum. The words don’t necessarily have much structure in their meaning, they were supposed to indicate an idea of what life thrusts upon us throughout its duration; ages, places, birthdate. There’s a fluidity in the drawing process that feels more directly linked to the psyche.” Indeed these works have a distinct sense of psychology that brings to mind the psychedelia of the groovy ’60s. They are perhaps an ode to a bygone era or an experiment in how visual language can be tied to a certain time in history, in this instance one that represents a dawn of something radical and new that somehow got lost as the decades progressed.

The uncanny human presence is tangible in the sculptures, alienated hybrid forms which seem to be mummies of the future. The augmented bodies seem not to belong to this world. Frozen in seated positions, they seem to be waiting to be defrosted, to start walking towards the past or future from where they arrived. The present has no power, no function. Everything is in a state of bizarre contemplation, a place where doors should be reopened, quasi humans should move again and red-hot burnt out shells explode to start a new beginning.

CREDITS
All images
Courtesy: the artist and Peres Projects, Berlin

REBECCA ACKROYD (b. 1987, Cheltenham, UK) lives and works in London. She received her Post Graduate Diploma in Fine Art from the Royal Academy, London and her BA from Byam Shaw School of Art, London. Her most recent solo exhibitions include: The Mulch, Peres Projects, Berlin, as well as shows at Galleri Opdahl, Stavanger, and the Zabludowicz Collection, London. In 2019 she will have a solo exhibition at the Fondazione Arnaldo Pomodoro in Milan, curated by Cloé Perrone.

CLOÉ PERRONE is an independent curator based in Milan. Between 2011 and 2016 she has curated several exhibitions at the Fondazione Memmo Arte Contemporanea in Rome. In 2016 she took part as associate curator in the fifth edition of Volcano Extravaganza Festival on Stromboli, organized by the Fiorucci Art Trust of London. In 2018 she was the coordinator of the curatorial team of Artissima’s section Present Future. In 2019 she is collaborating with the Fondazione Arnaldo Pomodoro in Milan, Museo Madre in Naples and the Italian Pavilion of the Venice Biennale.