He was locked in the dark for a week in a space of around four square metres, he struck an enormous bronze sculpture for hours, making it ring in the space, he sang on a stage with the scenery supported by his family, he sat on the guardrail on a dual carriageway with cars speeding past just a few centimetres away: Nico Vascellari (Vittorio Veneto, 1976) is one of the most interesting contemporary artists and performers to whom MAXXI is dedicating the focus exhibition REVENGE curated by Bartolomeo Pietromarchi from 8 June to 9 September 2018. With this focus show, the museum is investigating the work of the artist, starting out with Revenge, the work with which he won the 2006-2007 edition of the Premio per la Giovane Arte Italiana and which is part of the MAXXI Arte collection.

The installation, exhibited at the Venice Biennale in 2007 but since then hidden from public view, constitutes an exemplar of Vascellari’s oeuvre and despite belonging to his early period, contains many elements typical of his research. 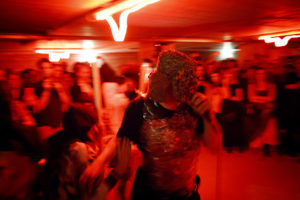 For this performative part, which will generate the audio component of the work, the artist, who loves to define himself an “subterranean activist”, has decided to use a number of underground spaces in the museum, open to the public for the first time.

In line with the relational, environmental, sonic and performative character typical of his work, Vascellari has conceived a series of sonic and musical actions disseminated in various areas and on diverse levels of the museum, inspired by the concept of stratum in both structural and cultural terms.

The soundtrack of this performative component, realised exclusively on the occasion of the evening of 7 June, will be absorbed within the sonic processing that is a structural part of Revenge and will be transmitted at high volume during the course of the exhibition by the loudspeakers incorporated in the work.

As in all Vascellari’s works, in the Revenge project too his search for expression and liberation from the confines of the mind and the body has been preceded by painstaking planning, similar to a ritual and thanks to which the artist with all his charge of dramatic and uncontrollable flair, can move without limits of time and space. The artist is offering visitors an immersive experience that allow them to challenge the basic concepts of above and below and inside and outside, cues for the far more complex ones of reality and fiction and an opportunity to explore the unwritten but silently established rules of ambits such as Art or Music to which the artist belongs. 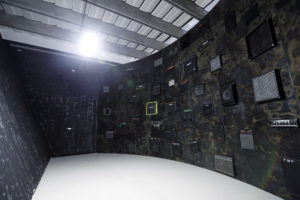