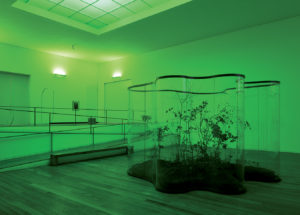 RIVET: Daniel, just a few days ago you shared a dream with us. You dreamt that you made an exhibition that was alive, not governed by some other intelligence, but intelligent in itself. The show would have its own cycle of activation, following a logic that supersedes that of the viewer. While you were quick to criticize this dream-idea, we were reminded of something that Yanomami activist Davi Kopenawa said: “Os brancos dormen muito, mais só conseguem sonhar com eles mesmos” (White men sleep a lot, but they are only able to dream about themselves). He is critical of how Westerners dream: they center everything on the self as subject. Instead, he envisions a dream beyond such individualism; he says we are also the bed, the person next to us, the air we breathe, the work we do, the tools we use, the people with whom we talk, and—why not stretch it a bit further? —the exhibition we are preparing. Could it be that your “dream exhibition” (pun intended) overcomes human agency, brings a system of connections, similar to how Kopenawa understands dreaming?

DSM: Amerindian cosmologies are extremely relevant to think about our present and our immediate future, to help us find a way out of this unstoppable spiral of social and environmental decay. Right now, for me, Amerindian thought and ecology are the only two models that can help us overcome the modern model of ontological oppositions, such as subject/object, culture/nature, mind/body, human versus their surroundings. These ontological divisions created or at least allowed our current crisis. While for Westerners everything is nature and only we are human (and stand above the others), for the Amerindians the shared original condition of everything is not nature but humanity. In other words, everything is human and therefore everything can potentially be a subject. [I am condensing an extremely rich worldview and I would highly recommend people to read Eduardo Viveiros de Castro on perspectivism if they haven’t done so already.] Acknowledging this forces oneself to think in a completely different way about agency, or politics, and the culture/nature or man/environment divide came to work in a totally new way. For example, Westerners understand themselves as the subjects by default and see the rest as the objects of their perception: to know something properly means to objectify it (the question is about what something is objectively). For the Amerindians, to know something properly is to reveal the maximum of subjectivity on what is inquired (the question is about what subjectivity something has). That’s just an example of how Amerindian thought allows us to think our “interesting times” in a distinct, richer, more ecological way. It allows us to rethink notions of agency. It even means rethinking who composes this ecosystem or how (and with whom) the process of rethinking shall be done.

RIVET: And in that sense, we are back to your dream, which is all about agency and entanglement.

DSM: Yes. traditionally exhibitions are so paradigmatically defined by this object/subject dualism: there’s the artworks on one side and there’s the audience on the other. Capitalism has worked by a process of alienation: it individualizes elements from the environment and transforms them into resources (and the rest into waste). It alienates people also, destroying the holistic relation between the living and their spaces. When I talk about ecology I’m not talking only about sustainability. Ecology works via a process of entanglement: it rebuilds the entanglement modernism and capitalism destroyed. I want to make exhibitions that recognize and rebuild this entanglement.

RIVET: Let’s think a little bit more about this notion of an ecosystem. In a recent interview with Lauren Cornell in The Spiral Forest, you end by saying: “The thing is when I make a work I don’t think about me but about us (and we must consider what or who this ‘us’ is).” This refers to generosity and collaboration—acknowledgement as a basic principle of your economy—, but also to a more ontological concern—right? Why, how, or since when do you want to probe this deeper, more metaphysical level? Does this understanding also have an effect on how you collaborate or on how you think about acknowledgement?

DSM: It was a statement meant to have two layers of meaning: one about the basic and necessary collaboration to make the works (with curators, gallerists, fabricators, cinematographers, scientists, or other professionals from diverse fields), which I think should be more poignantly acknowledged. And, on the other hand, it was meant to recognize the expanded scope of subjectivities and agents involved in the process of thinking, living, and creating (and I don’t mean only less personal collaborators like public agencies, networks, or institutions). I really want to make the effort to think beyond the current ontological frame we take for granted, and to try to expand the idea of “us,” because that question—Who belongs to us? Who is a subject of full rights?—that’s the primordial, political question. For example, the three of us have previously discussed together many of these questions, and when you read to me my own words and add new meanings, then we think together. A new subjectivity emerges that is not exactly located in you or in me but in “us,” which is a new “us.” I took this example from a conversation I had with the anthropologist Eduardo Kohn earlier this year [published as part of the Dreaming Awake catalogue made with Marres House for Contemporary Culture in Maastricht]. But as a curatorial collaborative you have probably had many similar experiences. 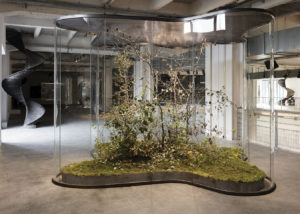 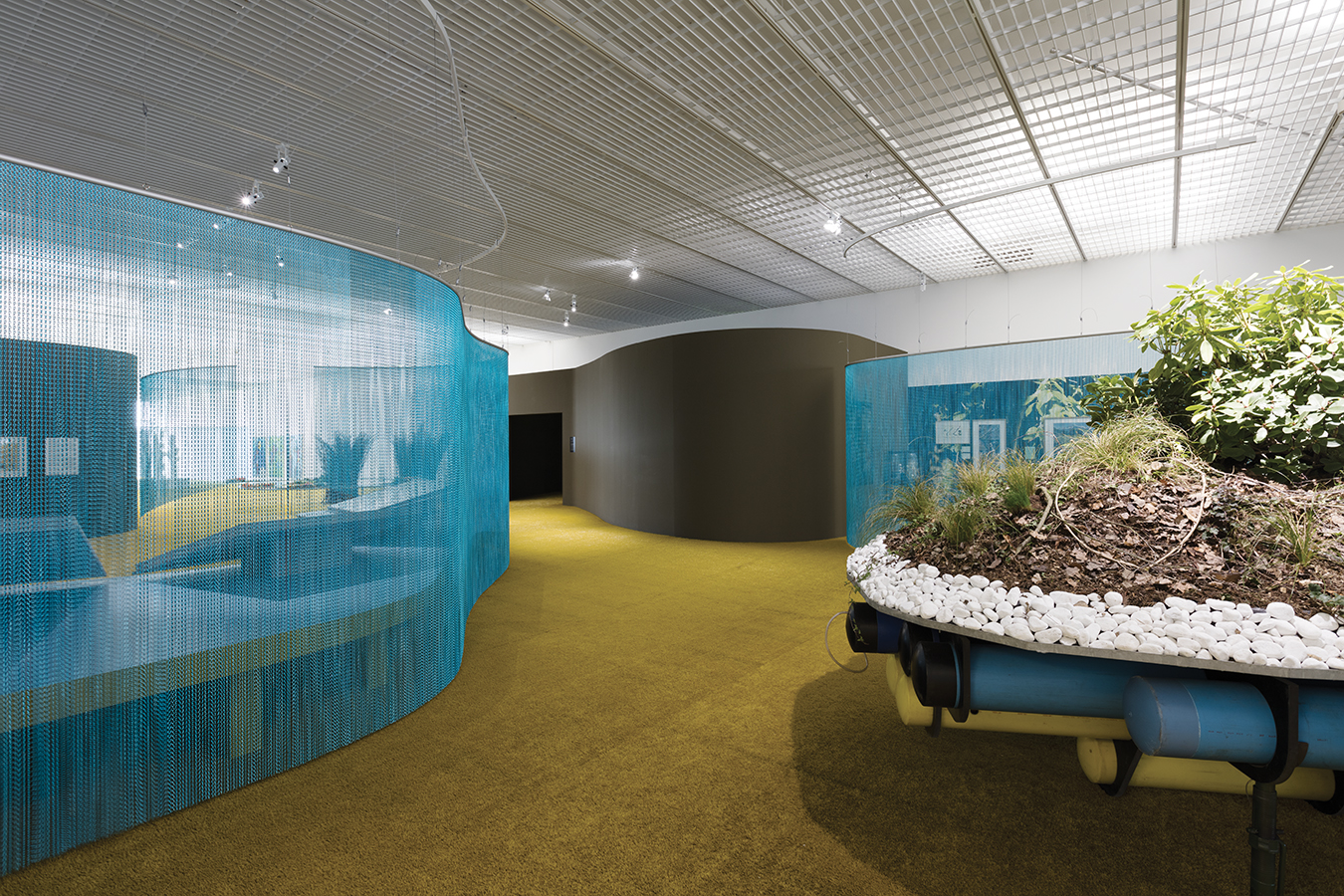 DSM: Exactly, or even better: a totally new 1! And beyond this experience between humans, I wanted to point out that there are many other agents we are living and thinking with: from bacteria to trees, from the mesh of the species in the rainforest to specters from the past and the future, to algorithms and pollution. We are all entangled. And understanding all these beings—alive or not—as persons enlarges the parliament of negotiation. That’s definitely one of the main interests I have in my work.

RIVET: This notion of a “parliament of negotiation” is very beautiful to think about as a metaphor for exhibitions! What we noticed in your recent exhibitions is that the experience of visiting emphasizes the moving body before the actual seeing body: you need to do the negotiating more actively through your body rather than through your eyesight.

DSM: That’s something really complex that for me is one of the main reasons the exhibition is such a rich medium, so effective. By challenging the physical relation of one’s body to its surroundings you can effectively change one’s perception and therefore influence the way one thinks. There’s many ways to do that in exhibition-making: from changing the light to induce changes in scale and size, architectural interventions, temperature, ritornellos… it’s a super rich medium barely explored to its full extent.

RIVET: We’ve been intrigued by the title of your most recent exhibition at CCS Bard: A Transparent Leaf instead of the Mouth. First of all, the leaf: it is a technology of processing or digesting the environment, it is not an organ. You have a formal, material interest in the leaf—as in Elegancia y Renúncia or Holograma (Mano con Hojas)—but it looks like there is more, something about membranes, about filters—maybe natural but also technological ones. And second, the mouth: mouths eat, they also speak, yet you seem to show more interest in breathing, in the pneumatic than in the digestive or discursive.

DSM: The title comes from a poem by Paul Celan that my friend Florian Lüdde used as a title for a show and I ‘stole’ it from him—permission asked, of course—because I just loved this hybrid of vegetable and animal. But it caught my attention how you described the leaf as a technology. The original meaning of tekhnè was art, and weaving in particular. So that means that a technology is an art that weaves. I wonder: what would a leaf weave? The tissue of what kind of world? If we blur the separation between humans and so-called non-humans—if we acknowledge that we are all part of the same tissue—culture and nature become one and the same mesh. Technology is not only something done by humans. I would like to think it is actually something more like breathing, something inherent to life. So the question actually is: how are we woven together with the leaf, and what can we weave together?

RIVET: How could we weave together with the leaf?

All images:
Courtesy: the artist and Esther Schipper, Berlin