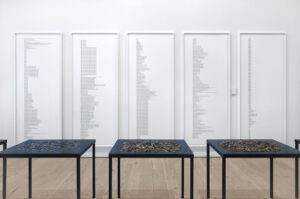 Scanning public auctions, eBay listings, liquidation and estate sales, New York-based artist Rose Salane has a delicate patience for excavating archives and collections, both personal and bureaucratic. Of particular interest to her are objects of diminished value. When exchange value is depleted, what else can be learned about the social, political, or personal circumstances that surround the circulation—past and present—of an object?

In Our Aesthetic Categories, cultural theorist Sianne Ngai describes “the interesting” as a contemporary aesthetic category that indicates the flow of information and “the tension between difference and typicality—or standardization and individuation in capitalist modernity writ large.”[1] It is an aesthetic that captures with curiosity, and produces an ambivalent affect and analytical impulse. The qualities specific to how information is managed, recorded, and circulated are central to Rose Salane’s investigations. Yet, Salane’s projects elude being merely interesting. Drawn to the aesthetic and emotional conditions of late capitalism, and the conflict of subjectivity within power structures, Salane searches for truths and fictions about individual lives that are embedded in objects and exchanges that can resist a tendency towards a flattening of history and information. What are routines of collection and accumulation, the personal habits that influence how systems are built? How can aestheticization be punctured to find a more intimate sense of feeling and experience? For Salane, objects approaching obsolescence—scrawled lists, faded inventories, found and discarded matter—are ideal opportunities to access exchanges, memories, and collaborations. 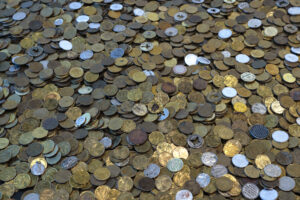 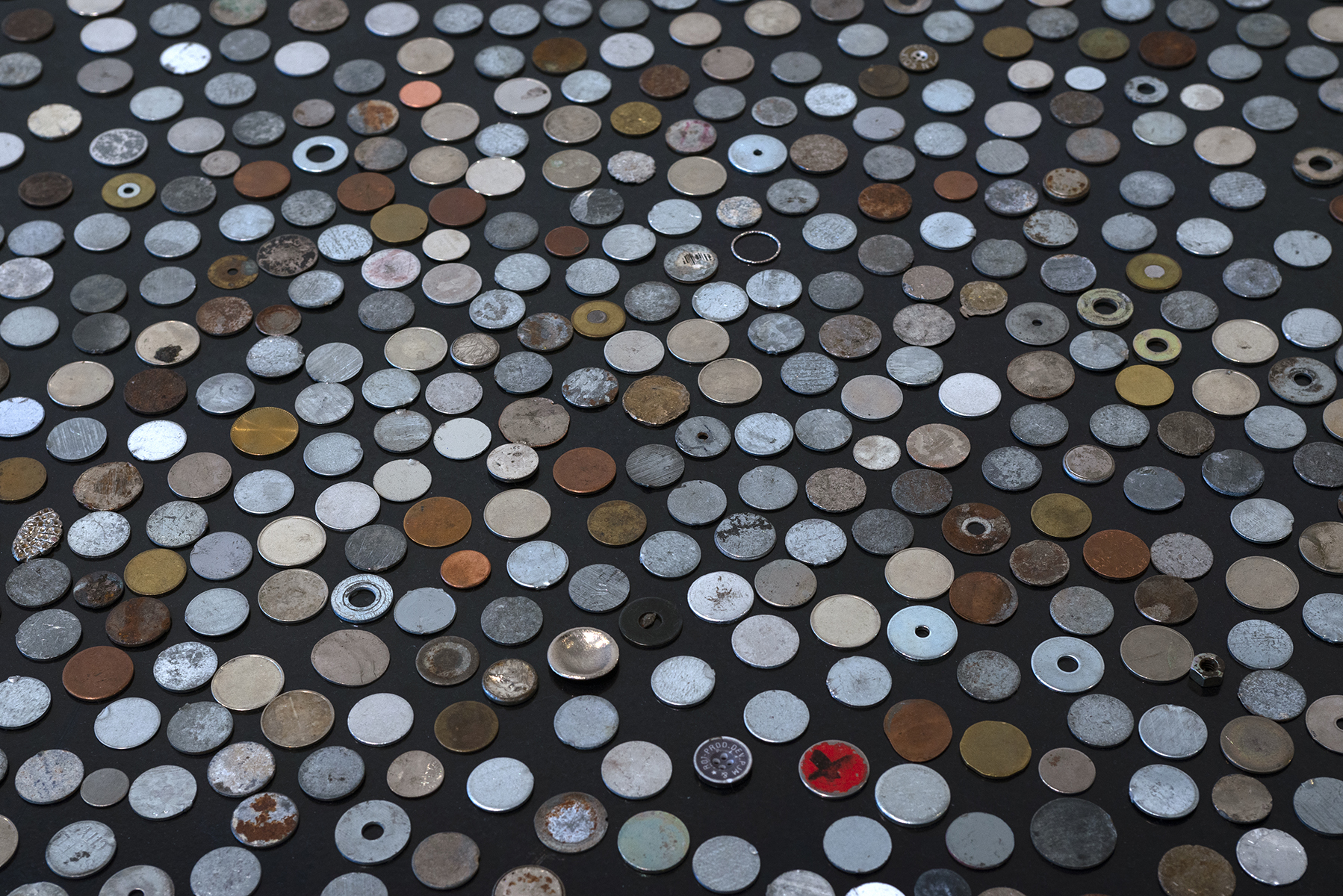 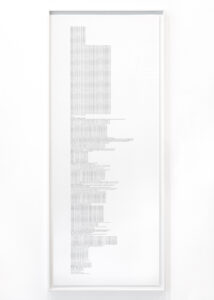 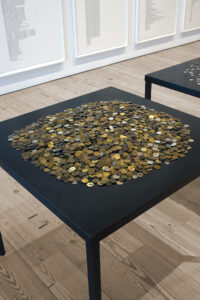 In Panorama 94 (2019), Salane purchased a lot of 94 rings at auction from the New York City Transit Authority. The rings were “unclaimed property” from the MTA’s Asset Recovery Division, essentially rings that had been lost on the subway system and found by commuters or MTA employees. Salane had each ring first appraised by a jeweler to identify a nominal exchange value; second, tested for traces of mitochondrial DNA to find clues into former holders; and third, examined by a psychic for a subjective analysis of the ring’s past owners. This trinity of spirituality, empirical, and relative value was disentangled from each of the rings via an expanded and intuitive forensic methodology, to serve as a reminder that only the momentary owners could ever attest to a true worth of the rings. When presented at Art Basel Statements in 2019, the sets of rings inhabited eighteen frames, every ring suspended and followed by a trail of text with combinations of Salane’s findings. Skirting on the fringe of sentimentality, each ring represents the fractions of time in which objects come into and hold value in our lives.

In a constant process of distillation, Salane’s approach is to reduce systems and monoliths into moments, memories, and happenstance while holding objects and collections as mediators between individuals and an apparatus. Working with the NYC Transit Authority and other super-structures in New York City has become a hallmark of Salane’s practice. Having completed a Master in Urban Planning from the City College of New York, CUNY, questions of infrastructure and the built environment are always present actors in her research. Cities are by design a backdrop onto which subjective experiences are formed, and individuals are transformed into information; they are spaces that bend and measure the boundaries between the quantitative and the qualitative. Cities also hold intimate data within their infrastructure; they are framed with micro-narratives and softly embedded with chronicles of the quotidian. Resisting a compression of information, Salane approaches these potential histories at a diagonal, entering through the moments of exchange between subjects and commodities. She looks for junctures that press against the cool detachment of history and interest.

C21OWO (2021) also began with one object and a site of exchange: a kiosk from the ground floor of the Century 21 department store in Lower Manhattan. In September of 2020, amidst the Covid-19 pandemic, the iconic retail chain announced bankruptcy. The department store shuttered and liquidated all assets, from merchandise to fixtures. Campaigns popped up on Instagram to save the department store, comments flowing in about the twin memories of the World Trade Center and Century 21. The store had grown into a metaphor for economic and social resilience and the distinctive glamor of the city. Salane repeatedly visited the kiosk as it stood in the shadow of failure after having survived previous cycles of crisis in the city from 9/11, to the 2008 financial crisis, and the move to online shopping. How was this kiosk a fixture in the overlapping social and security apparatuses within and surrounding the store? 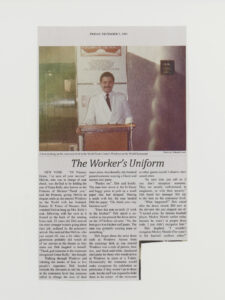 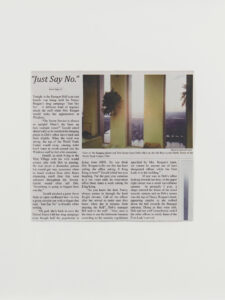 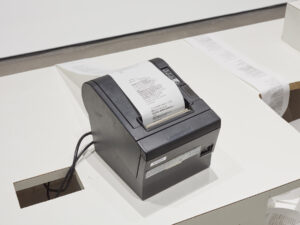 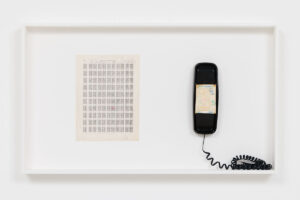 As C21OWO developed, Salane began acquiring liquidated inventory from the department store: clothing racks, Sarah Pacini dresses, phones, two kiosks (and all the mess that lived inside them). The liquidated assets, now artifacts of a bygone era, were the materials for eight interventions that comprised the installation at the Hessel Museum. Yet, instead of highlighting the newfound antiquity of these items, Salane’s installation underscored a moment of constant transition and the continuity of entropy and randomness undergirding established structures. In Randomness in Order of Extensions (2021), Salane frames a phone sourced from the store and a table of random numbers. The slick black plastic of the phone’s receiver itself frames a document, a sheet of paper titled “[Cos]metics Extensions” accompanies a list of brand counters and their four digit phone-extension. Rounded letters of different pen colors and layers of various users’ distinct handwriting flatten into a record of timescales. The pace of the workshifts is felt through the gouache of spilled coffees and drinks. Like the kiosk it sat on, this phone facilitated a routine of labor and was a fragment of an information network necessary for the store to run. Accompanying the phone is a page of random numbers, a slice from the landmark volume published in 1955 by the RAND corporation, the first use of computing power to generate random numbers used by statisticians and engineers. The page Salane acquired separately preserves the slashes drawn over numbers, the bracketing of groups, and notes from an anonymous operator. The trace of the hand dissolves in a shift towards automation, but Salane reminds us of the multiple hands and quiet routines still necessary to generate structures, systems, and histories. 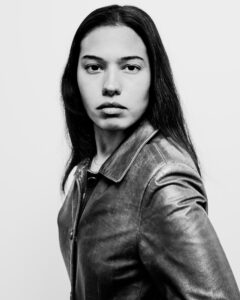 CAMILA PALOMINO is a curator and researcher based in New York City. She is curatorial assistant at the Vera List Center, was the 2022 In Practice Curatorial Fellow at SculptureCenter, and the 2021-2022 Curator in Residence at Abrons Art Center.