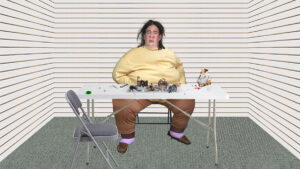 Jon Rafman takes over the Schinkel Pavillon’s Klausewith Ɛցɾҽցօɾҽʂ & GRIMOIRES presenting four visual works from 2021 and 2022. The exhibition title derives from the language of Magick by Aleister Crowley, where a Grimoire is a spell-book, and Egregore is an Occult concept representing a non-physical entity arriving from the collective unconscious that has taken on a life of its own.

In ₱Ʉ₦₵₮ɄⱤɆĐ ₴₭Ɏ (2021), the visitor follows a former gamer on an unsettling journey through uncanny environments in search of an old computer game that has seemingly disappeared from history without a trace. The film resembles a so called Creepypasta, a horror-related legend, modified, copied, and pasted across the web with vague or anonymous origins. ₱Ʉ₦₵₮ɄⱤɆĐ ₴₭Ɏ touches on questions of interpersonal relationships, the twists and turns of one’s memory, and the dynamic psychology of the isolated, atomized individual.

Rafman’s 2021 video-triptych Ɛցɾҽցօɾҽ, until now primarily shared over social media, shows a collection of carefully curated found photographs that the artist has animated. The “cursed” images merge and transform in cacophonous permutations. With Ɛցɾҽցօɾҽ, Rafman gives form to chaos, excavating the collective unconscious of the web and its users, as well as the ubiquitous human desire to search for meaning. Ɛցɾҽցօɾҽexemplifies a methodology of world-building. Meta-narratives and lore develop and morphout of Rafman’s vast archive of internet detritus.

The film мιησя∂αємση: Vol. I (2022) tells the story of the intersecting lives and fortunes of two young men —Billy and Minor Daemon —set in a surreal virtual dystopia, a distorted carnival mirror of our world. Billy (a pampered prep school boy) and Minor Daemon (abandoned at birth and raised in a child labor camp) share an extraordinary gift for virtual reality gaming. We follow their Dantean journey through incarceration where their shared talent could secure their freedom. 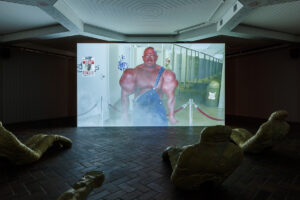 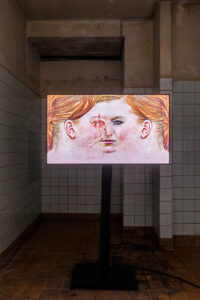 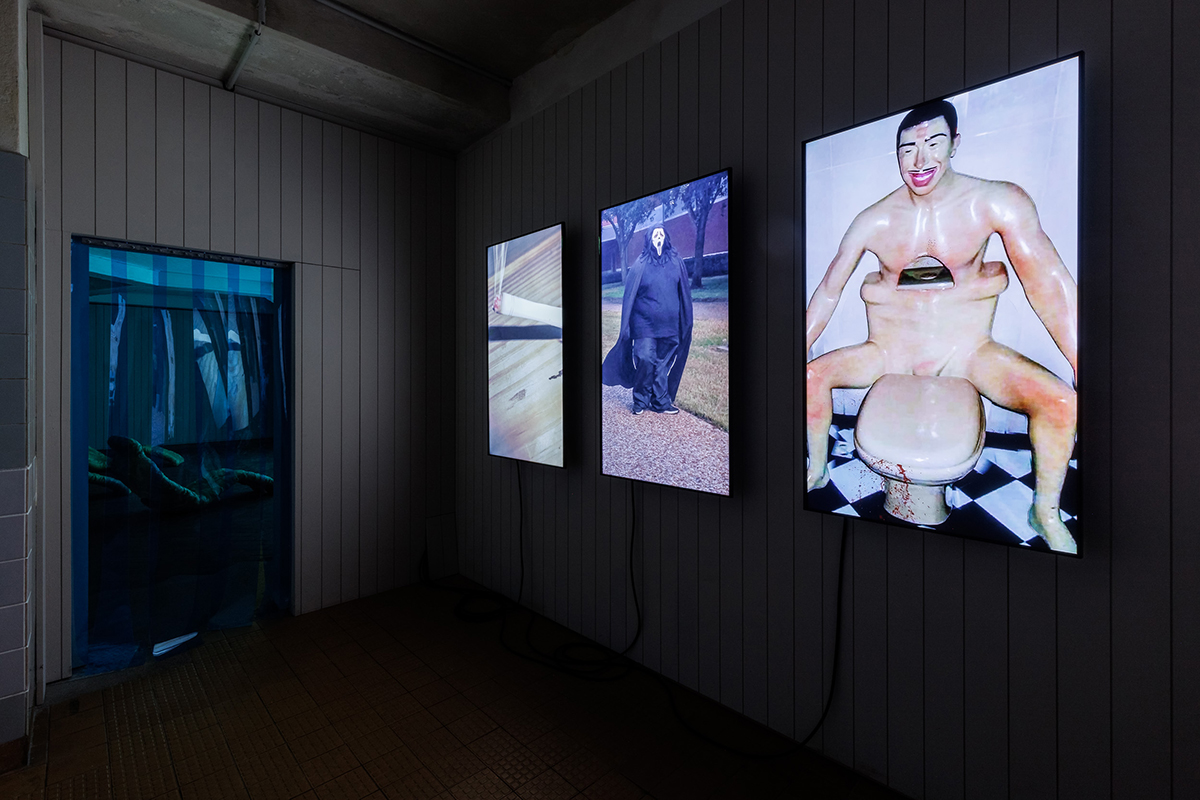 FAKE-ESTATE is the new solo exhibition of Anna Uddenberg at Schinkel Pavillon. Uddenberg has developed a new series of “usable” sculptures for the glassed exhibition space on the upper floor, which are loosely arranged in the room. Occasionally a group of baby-esque performers activate the ergonomic sculptures by posing in and around them. The addition of performance extends Uddenberg’s work along her artistic research of how objects, through their function, gain control over the subjects who use them.

In an endless feedback loop, the reference point between sculpture and performer oscillates from “using” to “being used”, between dominating and subjugating. Based on masochistic practices in which the body is willingly released for humiliation, FAKE-ESTATE provokesmoments of collision around questions of ownership, thereby negotiating the boundaries between free-will and control. Who owns our bodies, our minds, our data? The performers’ poses, executed as a state of mindless flow, become representative of our behaviour, in which we hand over control to user-friendly technologies, algorithms and targeted advertising on a daily basis. The performers’ outfits are inspired by the kink subculture practice of Paraphilic infantilism (adult baby syndrome) – testifying to a desire to return to a submissive, childlike state.

The artist’s new multimedia work symbolically and materially quotes the immediate surroundings of Schinkel Pavillon. The historicizing facade buildings, rapidly constructed in recent years and criticized as “fake history” – including Berlin’s city palace that reproduces the 19th century – have transformed the area of Berlin’s southern Museum Island into a stage-like backdrop. The eclectically arranged buildings, most of which are used as investment properties, create a supposedly romanticized image of Berlin that hardly bears any relation to the socio-economic reality of the city. The sculptures, whose surfaces produced in a 3D printing process imitate materials of these facades – brushed stainless steel, rattan, “skins” or veneer – in this way themselves become “fake” of their own materiality. The view from FAKE-ESTATE thus becomes a unique stage for Anna Uddenberg’s exhibition in which the performers give up their ultimate “assets”, their bodily autonomy and, eventually, their “Self”. 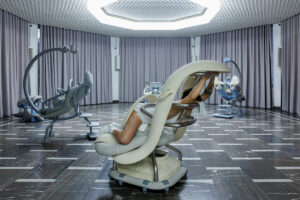 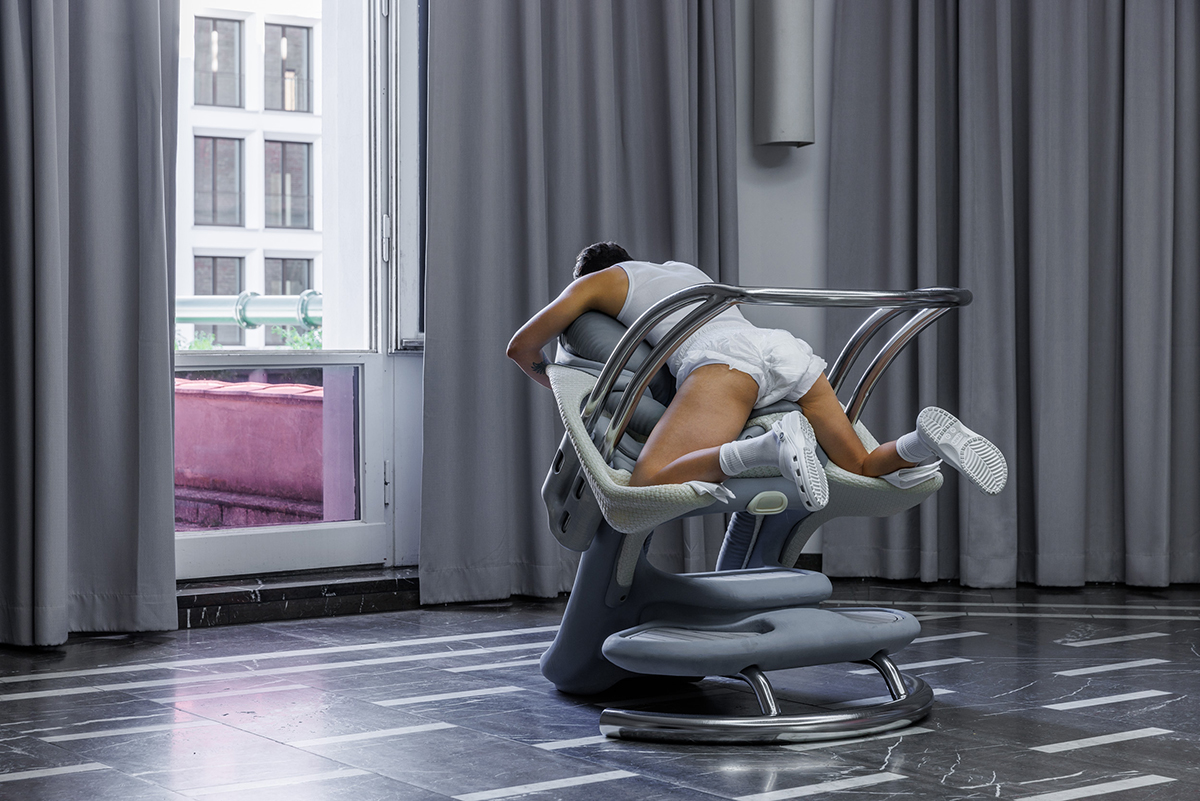 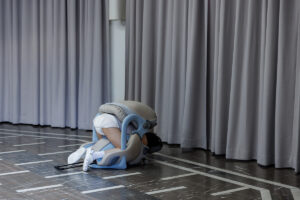