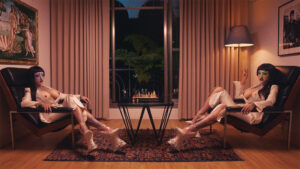 “The name is the guest of the substance.” This seminal line comes early on in the recent video work of Canadian artist Sin Wai Kin, A Dream of Wholeness in Parts (2021). As traditional bamboo music wafts within the scene, we hear these words as a voice-over recited by the artist, and their image, dolled up in a dramatic look that lays somewhere between drag and kabuki, appears on screen in a number of highly constructed countenances. Mirroring this inherent sentiment of guest and host, which permeates so much of artistic and cultural discourse, we first see the protagonist of this tale doubling in on themselves, with the exception of one version’s vivid eye makeup being green and the other’s blue. With the classic political symbol of a chess board positioned directly between them, they sit, almost entirely indistinguishable from one another, in full glam; dark banged wigs, satiny off-white fitted blazers with massive plastic busts and pinkish nips pushing the lapels almost into their armpits as dangly rhinestone chokers drip into their prosthetic cleavage, matching knee-length skirts and massive bridal-inspired stilt-like platforms teetering on their edges beneath crossed legs. Appearing like twins gazing at once toward each other and yet knowingly heedful of the camera’s ever-intrusive lens, they barely move, apathetic and completely contrived. It is clear from the onset that these characters are existing in a decorative and ulterior microcosm, and yet their god, so to speak, is the almost automated sound of the voice looming large from what feels like some all-knowing place far above them. These twins’ movements and subtle facial expressions are guided by the introspective musings of this overarching spoken narrative.

The more this overlord spouts out existentially crafted phrases that intimate the vast expanse of time and the perpetual construction and crumbling of societies, cultures, families, the more elaborate, environmental and symbolic the face of the protagonist becomes. With a sky-scape sprawling from ear to ear that encompasses imagery of the sun, the stars, plants, the sea, and the land, they morph from the initial sultry drag twins into something of a hermaphroditic, robotic deity. Amidst this shape-shifting, the idea of names arises again and again throughout the work’s fragmented, objective kind of storytelling. With each mention of what something is called, or was once called, or the divisions that names draw around abstractions of conceptual agreements, Sin Wai Kin alludes to the reality that now, almost a third of the way into the 21st century, we see language changing, as technologies seep deeper and deeper into our lives, minds and even our actual bodies. 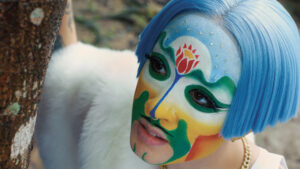 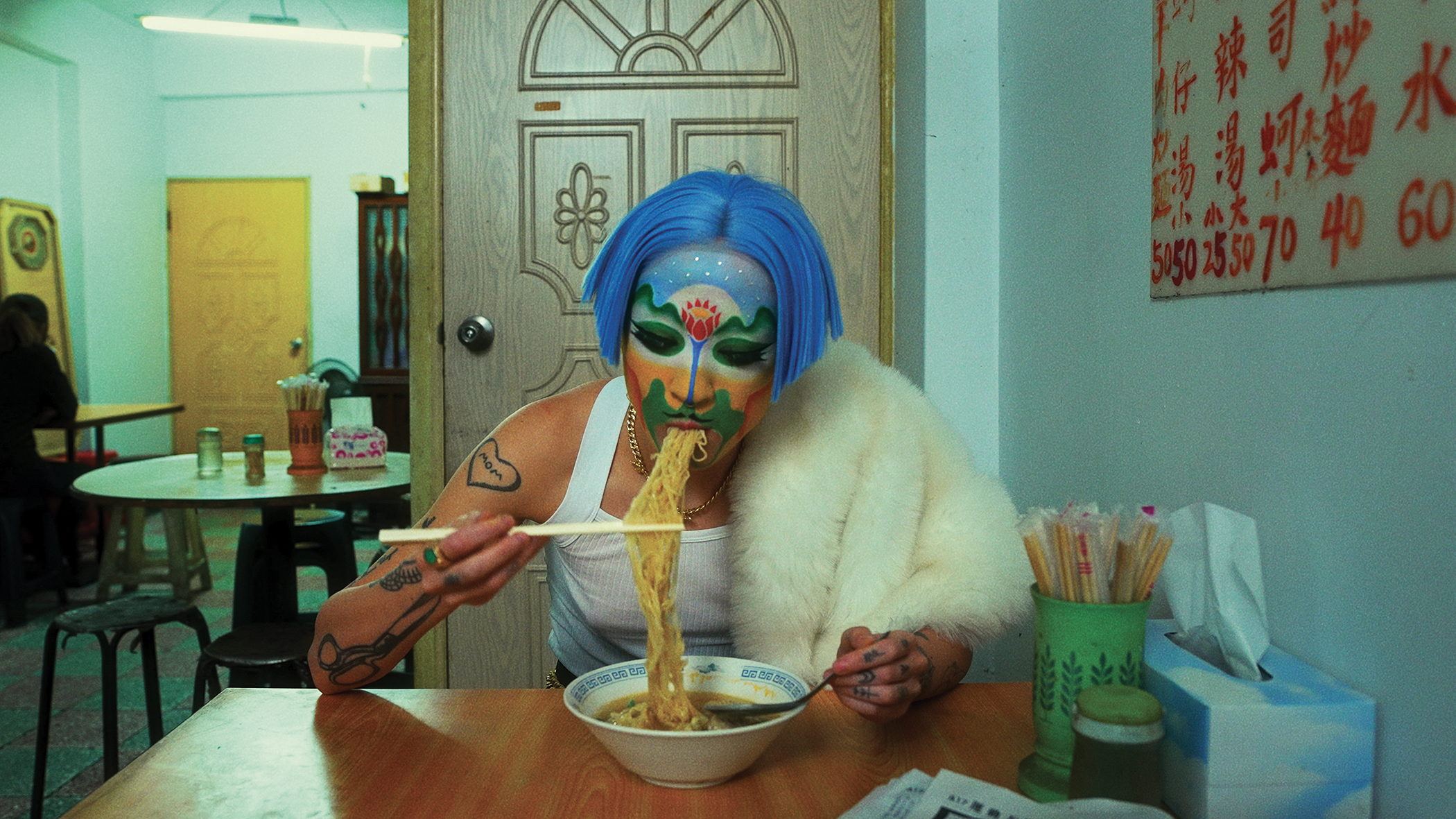 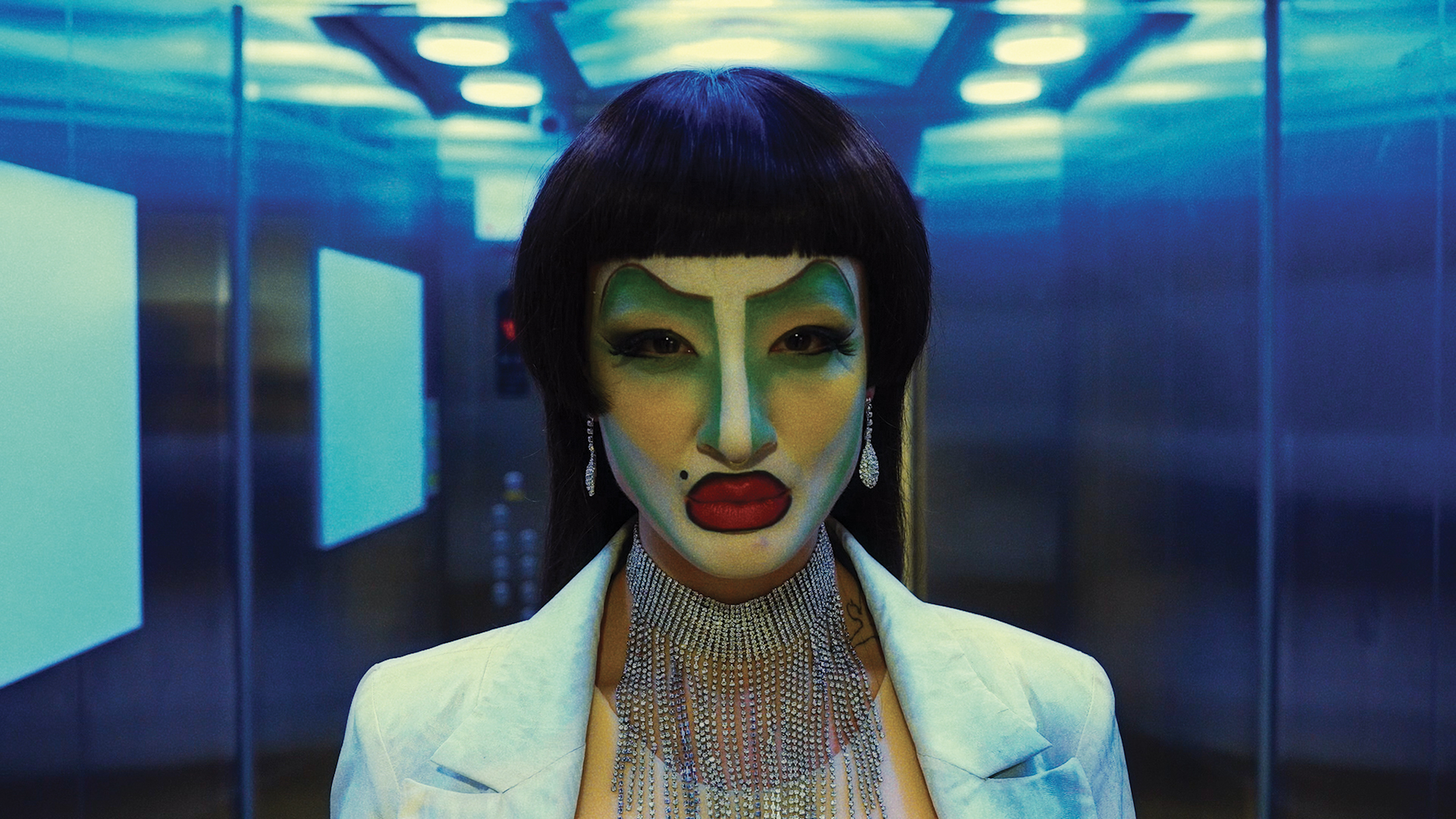 While the Siri-like voice that mulls over details as minute as a slick of oil across the cheek of a potential lover, and as broad and mundane as a metaphor merging the clear broth of a bowl of pho filled with taught-skinned dumplings with a landscape of rippling seas and pointy-peaked mountains, their focus on questions of language becomes all the more central. At the same time, the visages and scenarios that we find our protagonist meandering within—which include eating the aforementioned, lofty bowl of noodles, traipsing through manicured forests while talking to animated trunks of ancient trees, and perfectly posing bare-plastic-breasted in a cinched corset facing away from a dark and undulating sea—are only obliquely associated with the poetic ideals that the diaristic voice from above brings up for consideration and then just as suddenly lays back down, moving on to the next observation.

This isn’t, of course, the first time that a work of video art has exaggerated the disconnect between its imagery and its verbal narrative. However, in this instance, the slippage between the two feels particularly apt, as the top bracket of what we think of as the youngest generation of adults; millennials, approach middle age, and at the same time we see those making up the next cohort—Gen-Z—rather drastically moving toward a far more visualized way of communicating. Iconography like “tap-back” responses in smartphone texting platforms, emojis and memojis (that actually mimic in real time the facial expressions of the user through animated and customizable virtual “masks”) have become not only standard modes of correspondence both in private and public forums, but beyond that, video clips, filters and lifted and manipulated imagery has replaced, in large part, full sentences (or any sentences at all for that matter) in much of the most prevalent content creation leading media today like TikTok, Instagram, Reels, etc. These newer kinds of outputs allow for a baseline of expressions that lack details or individualization. On one hand, we can see this as a positive in that it resists the perpetuation of the kinds of binary barriers that can breed conflict and bias, as seems to be much of the underlying crux that Sin Wai Kin’s work teases out. On the other hand, however, the universality of this all-encompassing new shorthand also leads to a generalized opacity that bypasses often critical, underlying information.

In this sense, it’s not just that the work is compelling visually—as it most certainly is, with its vibrant, over-the-top aesthetic that incorporates such fantastical characters—but, moreover, that it reflects, whether purposefully or not, a significant communicative shift taking place that will surely continue to shape and alter culture and discourse going forward. One in which moods, tones and vibes loom larger and disseminate farther merely by their inherent attachment to visual icons-turned-stand-ins that act in place of more nuanced attitudes and fully formed opinions. When communications are slimmed down to essentials in this way, it can make for greater understanding, but whether or not an interpretive reception can flourish or might degrade over time, remains to be seen. Its in that contextual limbo that Sin Wai Kin’s works not only seem to operate, but more importantly, resonate as we wait to see. 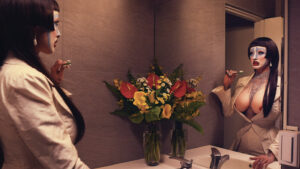 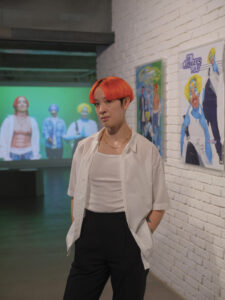 SIN WAI KIN (b. 1991, Toronto, Canada), based in London, is an artist using speculative fiction to interrupt normative processes of desire, identification, and objectification. Sin exhibited at ICA, London, Guggenheim Museum and Serpentine Galleries, among others. Sin was nominated for the Turner Prize 2022.

COURTNEY MALICK is an art writer and curator who contributes to Flash Art and Kaleidoscope, among others. Malick’s upcoming memoir, L.O.T.P. (Life of the Party) chronicles the antics of downtown Manhattan in the mid-aughts, just as smartphones and social media would change being young forever.