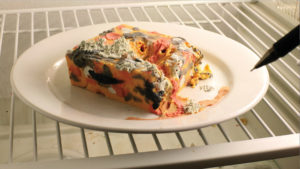 Cut
The film opens with a shot into a cluttered room with a computer, empty bookshelves and a sense of dilapidation
A door closes
A car starts and drives away
Cut
A fridge door opens onto the inside, empty but for a single piece of cheese
Cut
Close up on the cheese
The cheese moulds and disintegrates in time-lapse in the cold light of the opened refrigerator
Cut
A little man in an anorak and tracksuit bottoms enters a supermarket on an escalator
He shuffles around the aisles clumsily as if in pain, heavily leaning on his trolley
Hair in his face he looks at an arbitrary selection of items without actually buying anything
He seems worried and indecisive
Cut
The little man is in a vast forest, climbing a hill dwarfed by gigantic trees
He’s struggling over the rough ground with an improvised walking stick
His legs looks feeble. The stick supports the ailing movements
He falls and rather than getting back up he continues his progress on all fours, crawling. His actions are followed by the ghostly presence of his animator
A green plastic carrier bag falls out of his pocket and is whisked off
Cut
He rests for a minute on a tree stump, brushing his hair out of his face and looking around. This is the first time we glimpse his face clearly. He has doll-like features with the form of a nose, ears but no mouth or eyes
Cut
He is pictured crawling around finally hunkering down under a small needle tree as it begins to drizzle he uses a green plastic bag (this is a continuity error) to stop his head getting wet. He fiddles with some twigs
Cut
While navigating the undergrowth sticks and leafs function as both pastime gadgetry and potential utility tools
Cut
We see him from the back sitting on a tree stump the hood of the oversize jacket covers the head from the rain
Cut
A horror/action sequence plays on the computer in absentia of the player. The action and the sound hollow back in the dark room
Cut
On a short pile black carpet a fly pupates, in time lapse we see it mature from maggot to pupae to insect and then fly away
Cut

Black screen with the sound of flapping for a few seconds
– 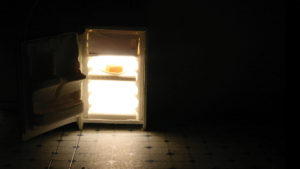 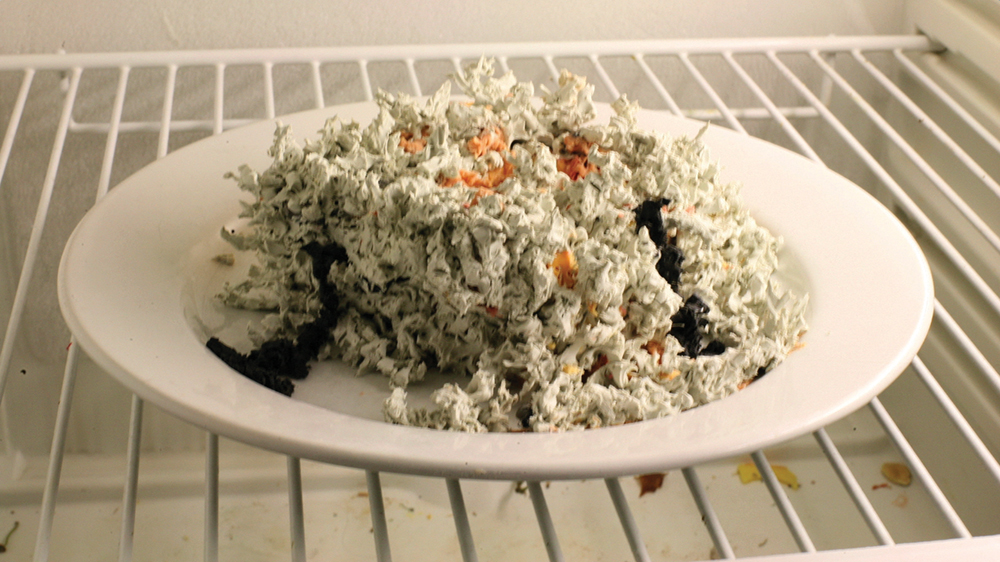 Stuart Middleton’s recent animation I am just going outside and may be some time (2016) provokes the question whether it is our imagination of a scenario or the staging of a simulacrum of such fantasies that is liberated through the medium of animation. Not as a mere depiction of a fictional narrative but as the desire for simulation per se? Pretension is here enacted not as a play of vanities, but as the possibility of claiming and unifying alternate selves through simulation and accordingly the opening up of the possibility for “the liquidation of the principle of identity,” as suggested by the writer and artist Pierre Klossowski.1

Middleton’s fondness for puppet making and animation carries through a selection of his recent work, from the exhibition Sad Sketches at Piper Keys London in 2014 that brought together a group of life-size figurative sculptures violently engulfed in one another and whose upper body parts culminated in sleek, round table tops, to the drawn animation films Finger, Piss, and Bucolic Death Drive, all 2014. He shares this interest with contemporaries such as Peter Wächtler and Rachel Rose, joining them in recognizing animation as a site to probe our relationship with art making and authenticity and beyond its power divulge the hypocrisy in our eagerness to emphasize with the false, the fabricated, the supposedly feeble and cute, while simultaneously being able to utterly disassociate ourselves from the suffering around us. However, is it not chiefly that ability to emphasize with the lifeless with the empty and stuffed that allows us, to speak with Klossowski again, to “fabricate simulacra” and animate that which is supposedly absent of substance or spirit?2

John Taylor refers in his analysis of Klossowski’s writing to the French meaning of simulacra as “a simulated act” and draws on Raymond Queneau and his reference of simulacrum in Zazie in the Metro: “He took his head in his hands and performed the futile simulacrum (fit le futile simulacre) of tearing it off.”3 Here the posed gesture of simulating an action functions as a stand in for a sentiment but also for an alternate version of oneself. The significance of the gesture lies however not in the wish to enact the alternate behaviour but in the desire to simulate it – leaving us trying to discern the fuzzy edges between going through the motions of a simulation and committing the actual act. This aspect appears especially relevant for Middleton’s work with stop-motion puppetry in which he as the puppet master literally guides and models each gesture of the animated acolyte, while leaving his directorial traces openly visible in the ghostlike boiling of the background. ‘Boiling’, a technical term, that as I learn describes the erratic movement of the background, the subtle changes in the direction of carpet fibres, shrubbery, atmosphere and light, caused by the stop-motion-fabrication of imagery that are painstakingly cut together and animated after the fact. This boiling registers not only the presence of Middleton as the creator, but also the many takes and variables that go into making the animated outcome. It also shows how our eye seeks to smoothen and correct anything that may not support the linearity suggested by the narrative. It appears that, that which is fuzzy, ambiguous or indistinct invites our laden gaze and is fervently shaped by the objective of the beholder. 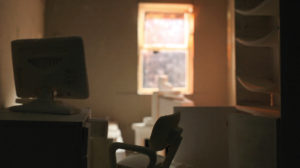 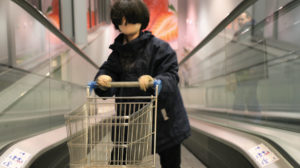 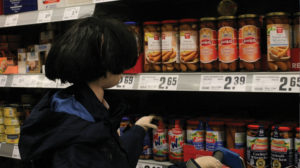 The puppets and characters conceived by Middleton receive their personality traits wired into the process of their construction. Material choices, joint structure, wire armatures, size and weight determine their ability to act, move and express themselves. Our empathetic levels appear to respond not only to the visual disposition of the puppet but particularly to the movement generated by its animation. Karl Sims’ historic experiments with virtual creatures and mainly his generation of an artificial neural network that can act on virtual muscles show that we are able to read movement on geometric figures and empathize with these even if devoid of any humanoid or animal-like visual features. This bridge between materiality and animated movement suggests the potential for a sort of embodiment through animation. The protagonist in I am just going outside and may be some time is an outwardly ineptly crafted figure that only reveals its refinery in the moments in which the believed lack of skill of its construction generates the determining character traits of the personality – its awkwardly lanky gait or the tweezer-like accuracy of the grasp of its wirey fingers. Rickety, situated between hoary worn man and prematurely aged boy, the puppet as protagonist performs a dual act that is inseparably embroiled with the figure of its creator – passing as both peril and prey, perpetrator and victim. This merger of protagonist and creator, of active producer of content and passive receiver of instructions is made clearly traceable in the boiling screen around the puppet and in a number of shots in which the hand of Middleton remains clearly visible in the act of staging the puppet and suggests a break with the concept of a singular distinct identity. Just like in the interior scenes that bookend the film it remains unclear whether the perceived threat is one coming from within or outside. Middleton’s use of puppets speaks to the body as something not entirely our own, but as an entity co-shaped by environment, location, society, and its technical advances and disadvantages. Through the lens of the puppet we can recognize our body as the techno body that it is, reconsidered and restructured through technological processes, through instruments like the computer, the network, the knife, and biochemistry, but much more through habitual custom, repetitive strain and daily routine. Our bodies are consequently as much acting as being acted upon.

Not unlike the common trope of the childhood bedroom whose cast of toys becomes alive only once the bedroom door has closed, animation is also in Middleton’s work tied to desertion. In the two Claymation scenes bookending the central narrative of the film we witness transformation apart from human agency. At first through an intricately crafted moulding sequence that traces the deterioration of a block of cheese in the opened refrigerator through various vivid states of bacterial infection and fungi affliction into total decay and later at the end of the film through the metamorphosis and imago of a common housefly. Yet also the stop motion scenes in the centre of the film imply a certain neglect, or the absence of upkeep of someone on the run, roaming without aim or social ties. Just as in the classic fairy tales the absence of guardian figures or social structures triggers a moment of coming of age – the coming into being of things that were previously dormant. Middleton calls the film a road movie and, although without ever actually depicting the open road, the motif of the journey is deeply entrenched in every scene of the film. Not unlike the transformation of the moulding cheese or the metamorphosis of the insect, the traverse of a spatial realm that cannot be grasped in its entirety is likened with personal growth and inner change. The road negotiates the division between nature and culture while carrying its own perils and rules that sit outside of customary societal control. It is a common space, frequented by people of all social classes and backgrounds, protected by their individual vessels but inherently threatened by the potential of collision. Middleton’s looped animation likens itself here to a morality tale or fable implying a story disguised as a moral lesson, how this lesson may look like however remains unclear. 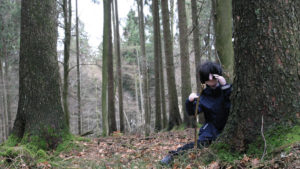