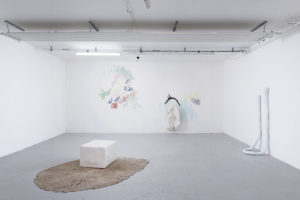 Passerelle Centre d’Art Contemporain presents three exhibitions in the frame of the Summer 2022 program. À fleur de peau highlights the relationship between the city and its inhabitants. More specifically, it observes how architecture and town planning can modify and influence our behavior, our body and our psyche. À fleur de peau is not seeking to be either exhaustive or impartial and attempts to present a passionate and poetic panorama of a range of different artistic approaches. Cities evolve, expand and sometimes fade away. Their inhabitants are directly impacted and experience these effects on a daily basis. These impacts vary considerably depending on each person’s social background and financial resources.

‘Gentrification’, one of the best known processes of urban modification, has been extensively reflected in recent times in literature, sociology and town planning itself. This term, originating in English, describes the transformation of working class areas brought about by the arrival of better-off social classes who renovate the houses and bring in different ways of life and of consumption. The poorest and most vulnerable are ejected fairly unceremoniously by the way the developers operate or quite simply by the rise in prices. The original inhabitants of these areas are deeply affected by having to live in a state of uncertainty, aware that their eventual departure is inevitable, and often existing in slum conditions. The artists Cao Fei (China, 1978) and François-Xavier Gbré (France, 1978) respectively tackle this subject from the perspective of the absurd in a Chinese megapolis and the way the dismantling of a poor neighbourhood in Abidjan is archived. Rayane Mcirdi (France, 1993) collects life stories and conversations from the inhabitants within the context of the changing Parisian suburbs where new blocks of flats replaced the rows of low-rise buildings of the 1960s. 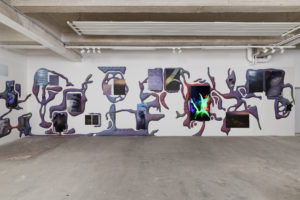 Marilou Poncin, Perfection is a lie so play with it, 2022. Courtesy the artist 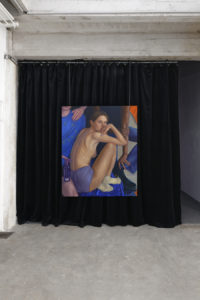 Industry, traffic flows and heating alter the air and the ground of cities. Some vast conurbations are known for swimming in opaque and constant clouds of pollution, altering the local climate and poisoning the local people, as well as the flora and fauna. In the photographs by LaToya Ruby Frazier (United States, 1982), bodies are sick, struck down by the poisoning generated from the steelworks neighboring a residential area.

War and the destruction it brings traumatise minds and bodies deeply and lastingly. Ruined buildings are preserved as places of remembrance such as the Genbaku Dome in Japan which became the Hiroshima Peace Memorial at the end of the Second World War. Some conflict zones are forbidden and deadly while others are fortified like the Green Zone in Baghdad in Iraq where local and foreign dignitaries live apart from the local population. Ali Cherri (Lebanon, 1976) recounts his childhood during the civil war when it was impossible for him to play in or walk through the streets that had become hostile places.

Many feminist theses study the history of cities from the point of view of the patriarchy – the authority held by men which excludes women. Men are celebrated in the public space through the names of streets, buildings and statues and women thereby rendered invisible. Men take over the public sphere, sometimes creating atmospheres of constraint, leading to fear, at times subconscious, of the urban space as revealed by avoidance strategies to stop oneself being harassed. Like a symbol, in 2006 the female rapper Diam’s sang “There’s a sensation of rape when I walk through my town”. The artist Cecilia Granara (Saudi Arabia, 1991) expresses this disgust in her painting, expressing the silent anger she has stored up from her daily life in Paris. The city is constructed like a living network in constant evolution. It bears the history of its inhabitants like open air archives. Pauline Ghersi (France, 1989) tells the story of the districts and how they were appropriated by their population in a series of films. Marilou Poncin (France, 1992), links urban cartography and the radiography of the body – the metro line becomes a beating artery. Flesh, spirits and streets all meld together for the benefit of collectivity and community. 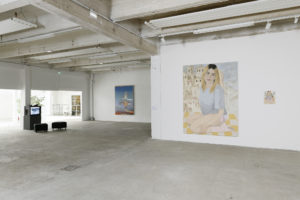 In the Twin Islands project, the notions of parity, reciprocity and exchange interplay. The project first took the form of two simultaneous creative residencies, taking place over one month, during which Sara Bichão and Violaine Lochu exchanged their homelands: Sara Bichão stayed on Ouessant Island, off the western tip of France, while Violaine Lochu went to São Miguel Island in the Azores, to the west of Portugal.

During this experience, which linked fiction and everyday life, they each worked on a ‘reflection’ of the other. Each on her island, they sought to invent methods of long-distance communication, playing on the notion of insularity. From east to west and north to south, their movements on the island to go out, find their way around, work, and communicate were done following a precise protocol and according to the island’s geography, through the interior (centre), the periphery (coasts), and the exterior (ocean). By way of these rituals, each mirrored the daily movements of the other, in island space and time, translating the experience as closely as possible.

In the course of these two parallel residencies, which took place in February – March 2022, visual, sound and performative objects for ‘communicating’ were produced. The first time these objects are shown and activated publicly will be their appearance at the Passerelle Centre d’art contemporain in Brest. These activations will be filmed for a video-performance to be shown at Carpintarias in São Lázaro – Centro Cultural in Lisbon, from 1 st sept. 2022. During a second phase of exhibitions and performances, the artists will experiment with different ways of presenting the work produced in the Azores and in Ouessant. 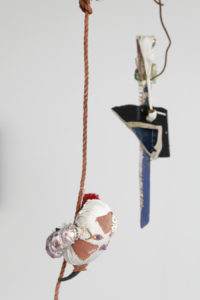 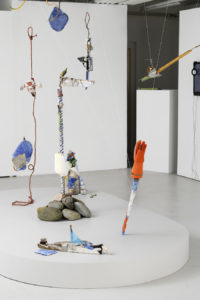 Céline Le Guillou (France, 1994) took part in the Residency Workshops for three months, an initiative of the Centre d’Art et Documents d’Artistes Bretagne. Each year the residency programme welcomes two artists living in Brittany or graduates of a School in the region. The exhibition Les forces heureuses is the fruit of the work and research carried out by Céline Le Guillou during her period in Brest and was created in close collaboration with the teams of the arts centre and ceramics workshop on the Brest site of EESAB (European Academy of Art in Brittany). The artist has undertaken a quasi-scientific observation of the human body and organic matter, while remaining within the field of the poetic. She previously developed a corpus of paintings, then sculptures, and recently chose to enhance her skills in ceramics by studying at the European Institute of Ceramic Arts in Alsace. Armed with this new knowledge, she wanted to develop her exhibition around a series of new sculptures, fired in Brest. She sought to take over the space by constructing a ‘drawing’ in three dimensions. Soft shapes and different textures spread themselves over furnishings created for the purpose by the artist. Their stands are therefore an integral part of the works and sometimes suggest scientific material. 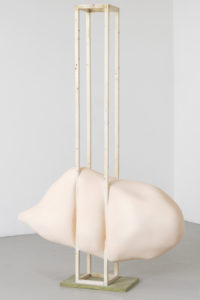 Céline Le Guillou has composed a discussion between her pieces, as if there were a pre-existing and unknown means of communication between works of art. She regards her forms as a catalogue from which she can choose a vocabulary or a grammar. Her sculptures and paintings depict the interior of human bodies, what is meant to remain hidden, recalling medical dissection works and the iconography of the skinned figure, famous in the history of art from Rembrandt to Francis Bacon. Céline Le Guillou also speaks of ceramics as being like ‘worldly flesh’, evoking the basic, carnal aspect of the material. The bodies she fashions defy classification, being both attractive and repulsive. She sees herself as a type of ‘intermediary’ between an existing substance and a final form, the work of art. The artist’s contribution is only a natural stage in the order of things. Les forces heureuses, a phrase Céline Le Guillou has taken from the philosopher Gaston Bachelard, recalls the energies of British sculptor Barbara Hepworth who sought an ideal form and Henry Moore who went in search the mysteries of forms. The arrangement of works presented at Passerelle reveals an age-old process of natural growth, as if the sculptures emerged by themselves or were simply accompanied by the artist, who for the occasion became an obstetrician, the person who enables birth.