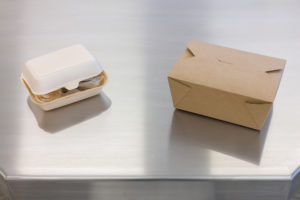 For her contribution to the series of readings organized by CFGNY at 47 Canal in New York in December 2017, rather than deliver a familiar public address Sung Tieu performed Inferiority Complex from a back-space at the gallery unseen by an audience seated with the lights off. The artist read a text in English reflecting on privilege, categorization and identity politics in the art world from a position of negotiation.

Posed entirely as a series of rhetorical questions, Tieu’s script could be interpreted as a dramatized reading of what has of late become resurgent and divisive rhetoric within art discourse.

In his recent essay Against Identity Politics, Francis Fukuyama charts the political rise and use of identity politics, reinscribing “the craving for dignity” recognized as integral to the human soul in classical philosophy, with his own term isothymia—a feeling of inferiority based on this need that “makes people want to be seen as just as good as everyone else.” Sitting in darkness, one is made conscious of visibility. This heightened sense of alertness was pivotal to Tieu’s self-reflective lecture performance, which critically skirts around the object of art whilst simultaneously attributing its aura to the space of its representation. Yet while the artist’s removal of her own physical presence (purposely made invisible) could be regarded as counterintuitive to the fundamental desire to be recognized as Fukuyama describes, such a gesture was neither a pointed critique of identity politics nor a refusal to participate. Instead, her oration and the ghostly apparatus of its transmission were indicative of what could be considered to be a spectral quality found throughout the artist’s recent work. 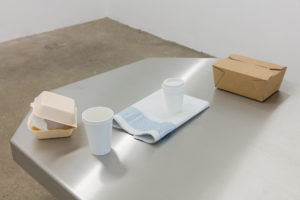 A state, or in this case a physically-enacted condition, of being there/not there or not wanting to be seen whilst questioning inferiority plays with contradictions that were also to be found in Tieu’s exhibition at Piper Keys in London earlier this year. Loveless similarly touched on a permeable self-awareness of contemporary surroundings. Two octagonal, rounded-edge stainless-steel table units were installed in the gallery, ordered from a company that provides communal seating used within correctional facilities. Unadorned and heavily bolted to the floor, paradoxically, they conjure images of the sort of prison violence one imagines their design features are meant to prevent. Together with the table units, the other material element of Loveless (2019) is a 7-channel sound piece emitting from variously recognizable fast food and drink containers neatly littered around the space and atop the table units. Their installation is prop-like, a stand-in for the real thing while the sound piece is an atmospheric mix of ambient noises and outdoor field recordings: bird calls, planes, dripping water, which merge into a more ominous, rhythmic hubbub of footsteps, heavy doors, keys and the hum of fluorescent lights that further insinuate imprisonment. It ends with a brief piano interlude. A third piece in the show, Untitled (2019), is a monitor framed in the same stainless steel. The seemingly blank screen played filmed footage of a darkening sky above the building housing the gallery, in which the only tangible image was a flock of birds that occasionally flew into view. If the exhibition as a space of representation is traditionally dependent on the binary of inside-outside, then the atmosphere of Loveless showed such duality itself is a construct within a reality where freedom, or expression, is continually institutionally-defined.

Placed casually under a paper coffee cup on one of the table units was Move Around, Get Inside – Brutally minimalist interiors (2019)—a newsprint with an article reporting on the opening of a Japanese-owned coffee shop in Jakarta. Reading this compulsively connects the minimal aesthetic describing the shop’s interior design and Tieu’s installation in the white-walled, exposed concrete floor of the gallery space. Does such association suggest a public is also imprisoned or institutionalized itself? If the prison-industrial complex creates a new populous through state confinement, Tieu insinuates a captivity on the outside, within capitalism. Written under one of a number of the artist’s monikers, in this case Tieu’s Vietnamese birth name, the text is part of a series, Newspaper 1969 – ongoing. Her description of an interchangeable brutal minimalism—in this case referring to the café chain % Arabica—speaks to the ‘global style’ Hal Foster refers to in his chapter on architect Renzo Piano published in The Art-Architecture Complex (2011). The tension he describes could similarly be applied to the same universalism Tieu recognizes “in every hip café, and bar, or designer hotel, or boutique hotel across the world,”1 which she reimagines in the doubling of form between correctional facilities and markers of gentrification where the distinction between the incarcerated and consumer melt away, leaving the body caught in a kind of neoliberal phantom zone. Such a vacuous environ echoes what Mark Fisher describes in his 2012 essay “What is Hauntology?” as the “the erosion of spatiality […] amplified by the rise of what Marc Augé calls the ‘non-place:’ airports, retail parks, and chain stores which resemble one another more than they resemble the particular spaces in which they are located, and whose ominous proliferation is the most visible sign of the implacable spread of capitalist globalization.” With her exhibition Tieu stages a -scape, both of land and sound, of non-place. The spatiality enacted out here, in this sense, is one that is hollowed out to create a simulacrum of identikit design and mass-produced packaging rendered impassive… loveless. 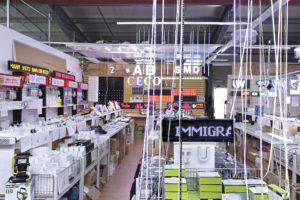 Tieu’s work in Loveless follows previous exhibitions, namely Song for Unattended Items, her 2018 graduation show at the Royal Academy of Arts in London, and Remote Viewing at Nhà Sàn Collective in Hanoi in 2017. For the latter, the artist researched Operation Wandering Soul, a PSYOP (Psychological Operation) conducted by the US military during the Vietnam War at the end of the 1960s. Dubbed “Ghost Tape No. 10,” this propaganda campaign is a 4-minute audio mix of a supernatural voice trapped in the afterlife that, as Tieu writes, “struck me as an extraordinary sound work, a strange and intriguing piece of music at best and an uncanny, haunting tool of terror at worst.”2 The sound recording was “made with the intention to be literally awful to listen too” and scare the Viet Cong into revealing their positions in the jungle to American troops, who weaponized spirituality to existentially question the Vietnamese soldiers cause.

Where the fictional specter in “Ghost Tape No. 10” was designed for the purposes of psychological warfare, one wonders whether Tieu is making her own ghost tape for the present with soundscapes that are eerily familiar. Frequently referring to instances of contemporary culture to expand upon theoretical ideas in his re-reading of hauntology, Fisher cites the example of electronic music in the mid-2000s, that “was no longer capable of evoking a future that felt strange or dissonant.” Broadly-speaking, if Fisher is describing a social anxiety of insolubility that traps us in the here and now, where “the futures that have been lost were more than a matter of musical style,”3 then could it be said that Tieu’s astute observations are similarly confined to the time being? In this respect, whether evoking the ubiquity of capital in the everyday, speculating on subordination or the prison-industrial, Tieu’s practice is hauntological, and speaks to conditions of such. It reminds us of an existential trap, or incarceration of ourselves—we are prisoners whether consumers, artists of color, or simply everyday users of building. Much like one of Tieu’s questions in Inferiority Complex: “Has this inferiority or minority become a ‘complex,’ an architectural configuration, a psychological syndrome, a political apparatus I am caught in?” The specters of capitalism haunts Tieu’s work.

Sung Tieu, Move Around, Get Inside – Brutally minimalist interiors (2019).

Sung Tieu, From Ghosts of the American Psyche – Let the Serpent In (2017).

CREDITS:
All images courtesy the artist

SAIM DEMIRCAN is a curator and writer based in New York.