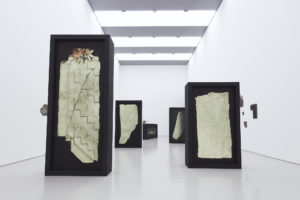 Tanoa Sasraku unpicks the layers that hold British identity together and quietly rips them apart. Her films, sculptures, textile works and drawings pull from the history, materiality, mythology and landscape of the UK but from the perspective of someone with equal Ghanaian heritage and queer experience. As she observes, “I’m trying to figure out what defines coming from this weird country.” Trained at Goldsmiths and currently studying at the Royal Academy Schools in London, Sasraku has already had notable success winning the Arts Foundation Futures Award in 2021. Her 2019 film O’ Pierrot is not easily forgotten. The piece was her first scripted work made during a residency at Academy Costumes in South London. She decided to apply to the award in order to “just see how I can push my practice into a more consciously performative zone.” Drawing on early black theatre and the Harlem Renaissance, she designed a character that played with ideas of historic representation. Her intention was to investigate “how sadness and humiliation was very rarely conveyed in dark skinned black characters, on screen in particular. Their emotions were often reduced to anger or stupidity in some way.” 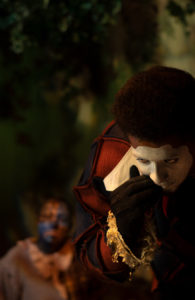 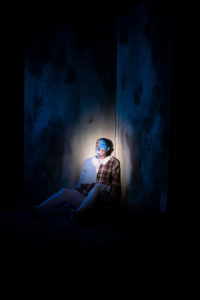 The film more directly was a reference to Kenneth Anger’s 1950 film Rabbit’s Moon, a stylized work without dialogue which played with the commedia dell’arte from a queer perspective. “It was just like saturated in this blue hue, and it just really impacted me. I thought a retelling of something would be a good place to start in my narrative filmmaking ambitions,” she notes. She had connected to Anger’s representation of fear and secrecy in his representation of Pierrot. “That’s how I felt as a teenager growing up in Devon, being gay and in the closet. Just perpetually afraid of yourself” she observes.

Like Anger, there are also elements of mystery and even horror in Sasraku’s O’ Pierrot. The film plays with the format of silent movies, interspersing exaggerated gesture and action between plates of text and muted dialogue. The personification of a , black, male Union Jack in whiteface is gangly, disturbing and embodies archetypal ideas of the trickster. Sasraku’s silent biracial protagonist, played by the artist herself, is manipulated and confused by this evil manifestation of colonialism. Harlequin Jack’s speech includes lyrics from the national anthem edited out in the 1950s which Sasraku describes as “brazenly colonial. And that is still how this country operates. Britain always pretends that it was the hero in the transatlantic slave trade history, whereas America, they’re like the brutes.” Union Jack’s falseness, and in fact the entire piece’s narrative, emerges through physicality, gesture and make up. The villain is so incensed with his state of being and imprisonment in the system that he drags his makeup from his face throughout the film. From a “scalloped, pretty, Elizabethan white framing” to this smudged, brown mess. 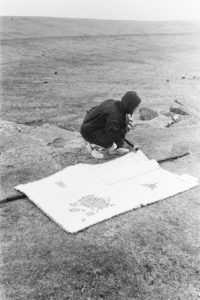 Text underpins much of her work, though not necessarily obviously at first. She creates her textiles out of fragile newsprint paper. “I have been printing these fields of toner on newsprint as a starting point. I was interested in this idea of creating a broadsheet filled with ink, structured in letters and words. But what if instead, it’s just a void of information? A black, saturated panel of ink? Can that be an abstract form of a story?” The text and even the labor is unseen but imbues the work with some kind of power and meaning at the same time.

Whop, Cawbaby (2018) depicts the artist walking through Dartmoor, in Devon, England, struggling to hold up a hand-made textile flag made from newsprint in the wind. The work explores where landscape and identity meet. “I was never really meant to be in Whop, Cawbaby,” she explains. “It was just because the wind tore through everything I meticulously built, that I had to stand in every shot, squeezing the splintered wooden mast together, to keep it from falling.” Holes are a recurring motif—geometric spaces left open within her hanging textile works playfully inviting the viewer to enter the work like an oversized mask or armor. There is an element of fashion here albeit a dysfunctional one. A disturbing costume that cannot be worn. 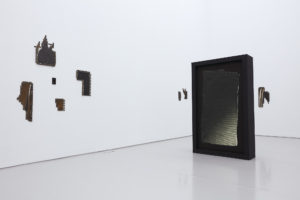 “I was looking a lot at samurai battle standards, and this very honorable Japanese relationship to flag bearers. The flag bearer always had to be, in a samurai battle, the last man standing on the battlefield. If he was ever stabbed and killed, another foot soldier would have to down his weapons and go and just stand with the flag,” she explains. “I thought that was a really beautiful image of the flag falling and being raised and falling and being raised and like the flag -or flagbearer – being like the heart of the army in a way.”

The reference to fashion also touches on Sasraku’s heritage. Her late father, Kofi Ansah, was a couture designer. A key reference for Sasraku’s textile works was  the history of Asafo flags of the Ghanaian Fante tribe, which she discovered in her final year at Goldsmiths. “I was reading  a bit more about my heritage, and I knew that I was descended from the Fante tribe in Ghana, on my Father’s side. I came across this amazing array of these flags, many of which were now listed on British collectors’ websites. I found that they were this incredible artistic resistance to colonial rule. There was such an amazing sarcasm in the flags,” she enthuses. “The British still had rule over them so the Fante were trying to find these subtle ways to undermine them. They would depict an English dragon decapitating an Englishman, his rifle by his side, headless, and the dragon kind of snarling over him. I thought that the relationship between animals, being given this power and agency over the humans and particularly the colonizing human that’s decided that they own that animal as a symbol, was a really interesting starting point as a way to tell stories through simple symbols and logos.” 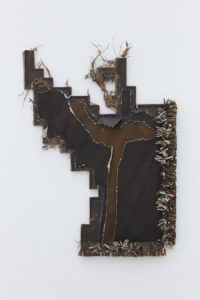 Following a large installation in London, A Tower to Say Goodbye (2021), Sasraku is opening her largest exhibition to date, at Spike Island in Bristol. The grounding theme is the mythology of South-West England, where she grew up, including Arthur Conan Doyle’s The Hound of the Baskervilles. “I reread the book and came across this sequence that I was really struck by, where Watson spots this Dartmoor pony stuck in a mire. He motions to rescue it, but this spectral horse is sucked under the surface, crying out across the moor. It’s a really horrific sequence. I love how Dartmoor is personified as this melancholic, vengeful mother figure in the story,” she explains. Elements include a fragmented, super-sized equine head, dominated by free standing, monolithic printed photocopies, encased in wood. Both form doorways into a mythological landscape within the exhibition. Like much of Sasraku’s work there is a focus on materiality, including stitched paper panels soaked in pigments foraged in Devon and Scotland, that she describes as an “ancient mineral colour that has been brewing underground for millions of years.” Like all of her work, history and meaning is embedded in multiple levels—even those you can’t see.

TANOA SASRAKU is an artist who lives and works in London. Born in 1995, and raised in Plymouth (UK), her practice shifts between sculpture, drawing and filmmaking.

FRANCESCA GAVIN is a curator and writer based between London and Vienna. She is the Editor of LIMBO and the forthcoming EPOCH magazine. She was the co-curator of the Historical Exhibition of Manifesta11 and has written eight books including ‘Watch This Space’ and ‘Hell Bound: New Gothic Art’. She has a monthly radio show Rough Version on NTS Radio on art and music.