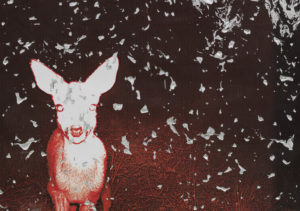 Our world is made up of stories; mutated views, hallucinations we tell ourselves, references we repeat to others and anecdotes we call truths. They make up a semi-consensual reality both online and offline, they also filter reality… denying some stories, whilst inflating others and attaching the tag of conspiracy to a few in between. This modus of a narrative is to simply search for meaning and understanding, which is inevitably a human trait. Without it we find ourselves gasping for air in the endless abyss of the existential nightmare, completely atomized from any sense of The Self or meaning. Yet this state of being tethered to reality is not something one does alone, it’s a collective process. When you have a conversation, read a book or see a piece of art you are being led through a narrative composition that others have constructed for you, which you, yourself are interpreting through your own personal narrative lens. Today, more than ever before, we have an unprecedented abundance of narrative arcs that are encapsulated and spread via media artifacts; and these digital chronicles are exactly where the Estonian artist Katja Novitskova mines her nature-culture from. Starting over a decade ago she edited and published the Post Internet Survival Guide which was 272 pages of artistic interpretations of the contemporary human condition in an accelerated world. The book asked questions like: How do we survive? What is this world? What will become of it? With material not only from Novitskova but also from emerging artists like AIDS-3D, Brad Troemel (The Jogging), Iain Ball, Jon Rafman, R-U-INS?, Sterling Crispin, Timur Si-Qin and others, it instantly became a cult classic and led Novitskova into the decade-long practice of research and digital collages that try to speculate on the future of image and the nature of images in a digital attention economy. Since 2019 Novitskova has begun to concentrate on a new body of work which both maps unique synthetic territories and creates new models to view them.

Katja Novitskova’s practice often concludes in coherent ecosystems that jam hard at the intersection between technology, sentience and art. 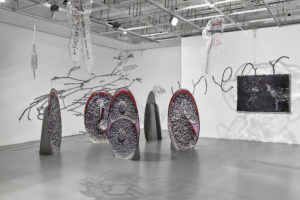 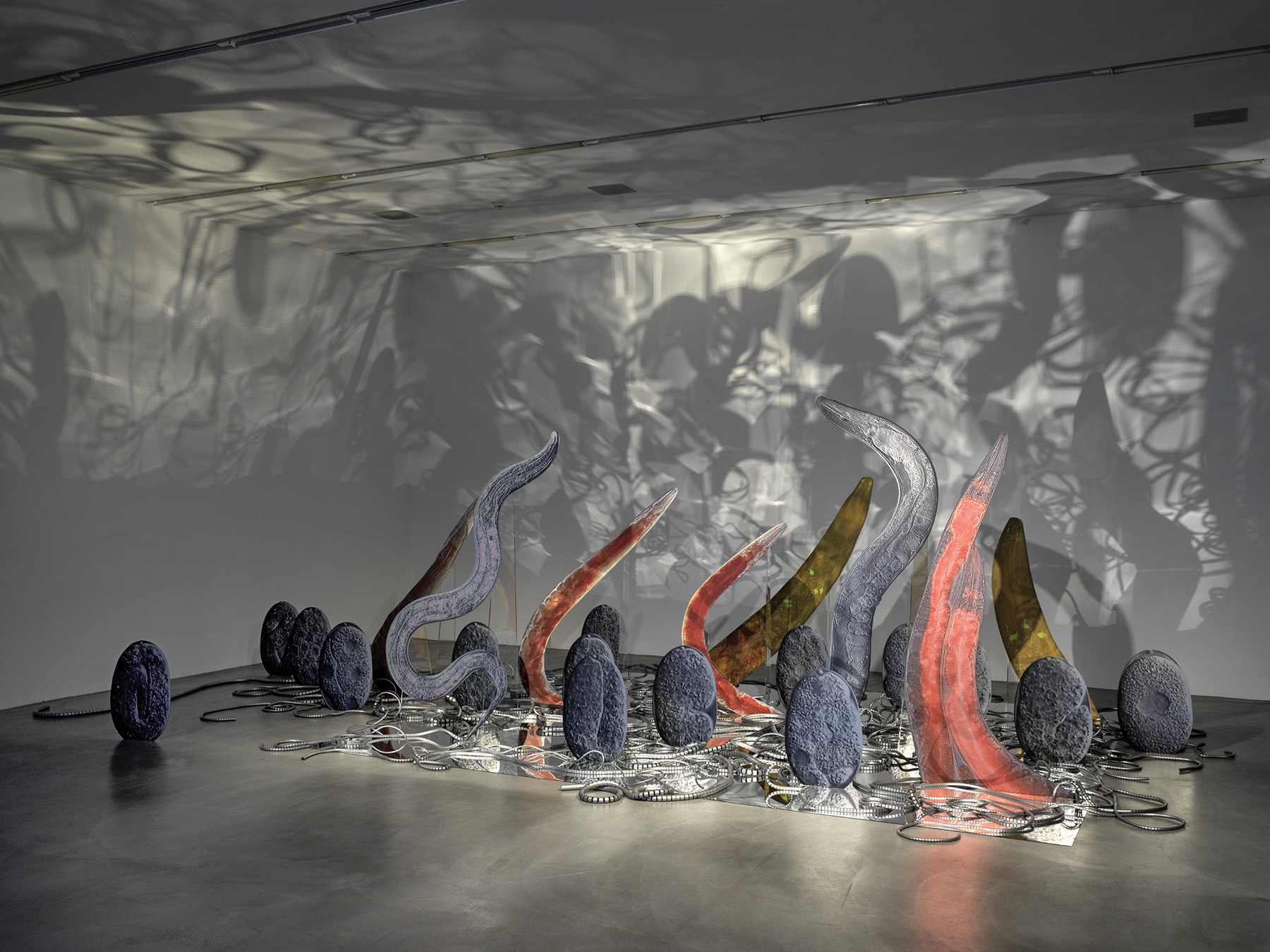 She uses the web solely as her window to the world, articulating and collecting sets of data which most commonly engage with speculative near-futures. Screenshotting them and liquidating their pixels she mutates her sources into models of advanced synthetic nature cultures. Her latest works which were exhibited at Hamburger Bahnhof as part of Preis der Nationalgalerie explore the long-term aftermath of global collapse. The installation is a mock-up of a laboratory which has been destroyed through some unspecified disaster, which is now beginning to birth new life from the debris complete with animatronic babies and metallic cell farms. Novitskova collaborated with PWR Studio to create the generated graffiti fonts that adorn the lab walls, seeing the texts as plot devices that carry the vector of meaning, thought and mood. When speaking to Novitskova, she explains: “In computer games, you always find graffiti telling you what went wrong, why you are here, it allows you to mentally construct the narrative.” In chromatic dripping sprayed words, the phrase “Receptive Fatigue” slips down the wall. Novitskova explains this is about overlooking biological aspects that have become the norm. Running along an opposite wall the quote “Activation Patterns” glistens: this is a phrase that has come up in Novitskova’s work since 2014 as a direct reference to image processing in machine learning tropes. The graffiti generative font technique has also been used to create the silver etched stick figures that are added to the animal habitat images taken by automatic night cameras all across the globe. Novitskova always pulls these images from the Internet and digitally collages other insignia onto the final composition. She tells me: “My thesis on these generative drawings is that they synthetically blend the historical, human, organic, non-human and pervasive technological processes onto figures which make sense to my work. I try to stay away from the representation of the human body per se; this is a new route for me, but it’s still not explicitly human.” One can also find this in the nursery. She adds: “The robotic baby swings were birthed from the trash after the apocalypse, not straight away but years later. I wanted to stay away from hazmat suits and Chernobyl aesthetics, these babies are as if an artificial womb was mixed with a robotic vacuum cleaner which has, in turn, created a synthetic and unpredictable sentient being.”

For Novitskova the key phrase in this work is “LAB RATS”: it tells a story of the present social condition. She explains she first found the phrase on a subreddit community chat channel, which basically caters for lab workers who post memes about their work. It is explicit through her thought process that she recognizes the human as the scientist but also as the lab rat. She states: “The colonial expansion of humanity is now not done globally through land but through the genome, I mean this in the eugenic sense. People are colonizing others through procedures like forced sterilization or exposing them to certain elements or chemicals. This is messing with the population and it is still happening, I’m not just talking about the past, what is happening today is more sophisticated than ever before which brings new problems and more complicated solutions.” She adds: “For me, the speculative aspect of the new work delineates from research into biological information. I can say from my findings (which are taken only from online science journals and websites rather than from inside labs or speaking with scientists per se) that I assume we will have severely less control over our genetic information as new corporate ways appear and are used against us. I would also guess that 99% of the population are totally ignorant about the decisions that are being made in relation to their future bodies. People don’t know about who patrons what, how experiments are led and who owns which genomes. This biotech angle has been present in my work for some years now, but with COVID-19 public consciousness to the topic has exponentially risen.” 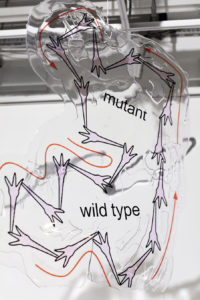 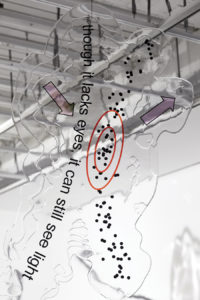 It is an interesting intersection to which COVID-19 becomes part of Novitskova work, in relation to the earlier suggestion that our bodies are made up of media narratives and artifacts, because under the COVID-19 lockdown the only way in which we were given news was through digital outlets and most of the larger newsrooms declared there was strong evidence that the virus originated in bats. Yet the mystery still remains how it got from bats to people. Researchers overwhelmingly think that it’s a wild virus, which probably passed to people through an intermediate species. But no one has found the virus in the wild yet, so other explanations cannot be ruled out entirely and of course, as Novitskova begins to tell me, new theories on the epidemic will unfold inside labs at the cost of hundreds and thousands of animal lives across the globe.
“The work I make triggers me emotionally, I cannot make work that does not, but in this case it’s very hard. I am not an animal activist but I also am”.
The new direction that Novitskova takes in her work shows the viewer the industrial level in which humans actively manipulate animal bodies, dissect them, inject them and murder them. A process which also refers to the aforementioned double-bind phrase: “Lab Rats”. Novitskova wants the viewer not to forget that this is only the first step, as soon as these tests reach a certain level in the labs they are then carried out on human bodies through physical and social engineered apparatus. “The core of the new work is still done on the Internet, I don’t go to labs, I go to the web. There are no gatekeepers there… Did you know behind closed doors of every scientific study there are fights between patrons with questions about who gets the rights and secrets that are buried or exchanged. Science is ultimately a constructed narrative.” She develops this viewpoint further by stating: “I have noticed when I browse the web I find all sorts of extreme headlines for science papers. They are explicitly created to grab attention, which the scientists need in order to secure funding. They are publishing with pressure for their papers to go viral in order to attract the greatest possible attention which will in turn gain them access to the next level of research.”

This is a strange but not surprising revelation. One tends to normally assume science to be above and beyond such corporate attention economy click-baitables. Yet when we loop back round to discussing science as a narrative, we of course quickly link up with the new technosphere and the hegemonic groups that run it who are profoundly white, cis males who seem to take most of their new models of technology from dystopian sci-fi narratives which for the rest of us become real life. Novitskova explains to me: “Progressively utopian narratives infrequently exist, there are no sexy models so basically the boys don’t do it, we are living in a world were sci-fi narratives are highly effective in shaping reality and that means synths look like humans and are also obviously sexbots to boot. This dark future scenario is the most common line of technological advancement today. We are living in an Elon Musk-Simulation.” She continues: “I am not interested in the synth corporate hybris of the future, I am a science fan but the dark side of enlightenment is very clear to me. The idea that the human trumps any other animal on this planet is not something I align with.”

This new direction to which Novitskova is taking in her work can be read as politically astute moving from the exposure of images that are directly applied to our retinas to gain attention to images that are specifically hidden from the public yet are shared with equal furore to certain groups and institutions in order to author the next chapters of human existence. It is true that our bodies are continually being rewritten, but who gets to pen their progress should be a matter of public debate and individual choice, not some fantasy secret lab experiment played out in real-time.

CREDITS:
All images Courtesy: the artist and Kraupa-Tuskany Zeidler, Berlin

KATJA NOVITSKOVA (b. 1984, Tallinn, Estonia) lives and works in Berlin, Germany and Amsterdam, Netherlands. Her work tackles the complexity of depicting the world through technologically driven narratives. By bringing together art and science to the level of nature, Novitskova brings awareness to the mediation and representation tools used to depict these realms. These works bring up memories of the “alien” depicted by science fiction, and the role of the non-human in an hypothetical not so far away future. In 2021 she will take part in The Dreamers 2021 | 58th October Salon | Belgrade Biennale, Belgrade.

PENNY RAFFERTY is a writer and visual theorist based in Berlin. Her theoretical essays and creative texts have been commissioned for numerous cultural magazines and books including recently released No Need To Hunt – We Just Wait For The Roadkill, edited by Paul Barsch. She was the in-house critic at STATISTA, Berlin 2019 and is one of the co-founders of both Ishtar Gate and The Black Swan DAO. She co-developed the think tank series Artworld DAO’s with Ruth Catlow in coordination with The Serpentine and Futherfield Gallery 2019/2020 and continues to work as both an auditor and researcher in the tech cultural field.