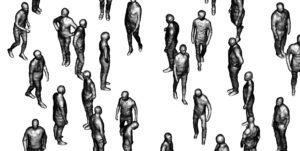 Rendered in a dimpled, luminous grey, the animated figures in Oliver Laric’s video, Untitled (2020), appear as if captured by a scanning electron microscope, or made of hammered tin. Sharp, rhythmic cuts bring us from one tableau to the next. A praying mantis turns its head; a crab moves across the screen; flies, worms, and eukaryote-like critters swarm; a sea urchin, lobster, and horseshoe crab are held up as if by a vendor at a seafood market; an assortment of fungi fruit from various surfaces. Everything moves with a vibrant jerkiness as in stop-motion animations or time-lapse videos. There’s a sense that we’re seeing something come into being. A lumpy mass grows a head and limbs to become a man in repose. A snout protrudes from a shapeless lump to become a frog. A figure evolves from an embryonic mass. Topologically, the sea creatures, insects, humans, and fungi are all bags or vessels—wireframe nets molded into life forms.

The notion that the world is populated by vessels is found in much of Laric’s work. The Hunter and His Dog (2014) is a series of low-relief sculptures made by pouring polyurethane into molds made from 3D scans of John Gibson’s neo-classical sculpture of the same name (1838). The resin is mixed with powdered jade, aluminum, bronze, and various pigments, then poured into the mold as if making marble cake. Privileging content over form is emphasized by the fact that the sculpture exists in multiples. Each pour in the mold produces the same form with a different marbling pattern. In Laric’s hands, Gibson’s The Hunter and His Dog is merely a vessel and its content—its substance, its meaning—comes from what fills out the form. Sleeping Boy (2016), a 3D printed sculpture fashioned after another Gibson scan, proposes the opposite. Where the marble mid-19th century original, carved under the tutelage of Canova in Rome, displays Gibson’s ability to hew supple, youthful flesh from stone, under Laric’s hand, the boy’s soft slack body and the clumped wool of his sheepskin seat are rendered into a series of thin plastic shells fastened together to form a figural whole. In this case, the surface is the content.

In fact, many—if not most—of Laric’s things can be construed as vessels. The opening lines of Tristan Garcia’s philosophical work, Form and Object: A Treatise on Things (2014), comes to mind. “Our time,” he writes, “is perhaps the time of an epidemic of things.” In a world where things increase in number at an exponential rate, Garcia proposes that one way to attend to everything is to remove the hierarchies we’ve previously used to put the world into categories. Rather than cramming more books onto a full shelf, he lays them side-by-side on the ground. For Garcia, objects and things (a sculpture, a sea urchin, the Internet, the coronavirus etc.) exist before we ascribe meaning to them (a piece of rock exists even before we recognize its existence). Things come into being when their various attributes combine. Imagine everything as a container filled with cards with qualities and attributes written on them. A crab is nothing more than a vessel filled with cards labeled “marine animal,” “exoskeleton,” “invertebrate,” “possesses pincers,” and so on. The crab is defined by what is in the “crab vessel” and what is not. “Being comes inside a thing and being goes outside it,” Garcia writes. “A thing is nothing other than the difference between being-inside [l’être entré] and being-outside [l’être sorti].” 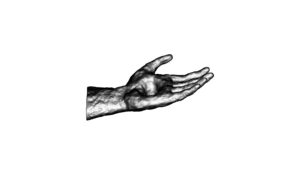 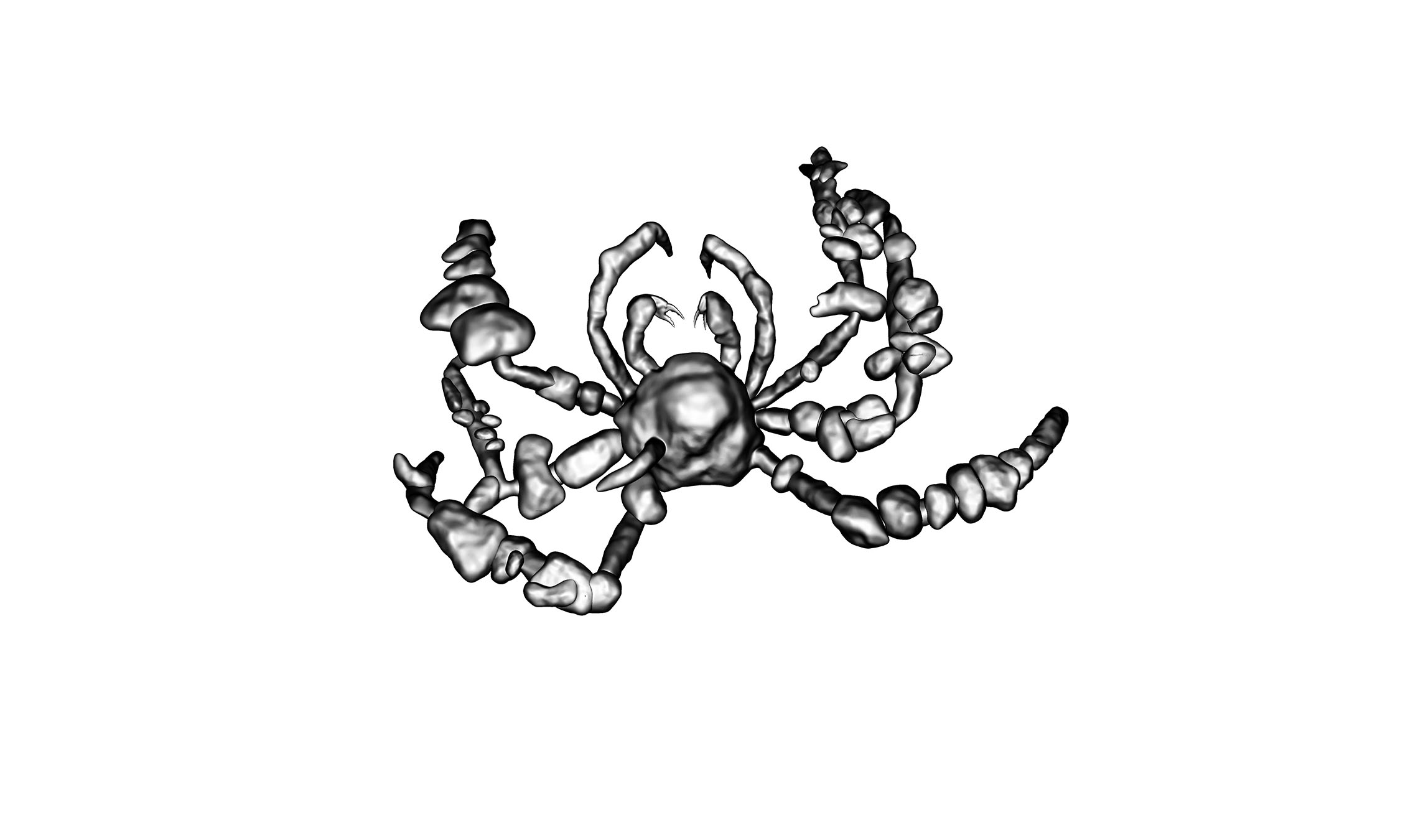 Returning to the pulsating, evolving forms in Laric’s video, it bears mentioning that the question of formation is depicted through agents of decay and disintegration. We see fungi multiply on tree trunks, worms unspooling with life, bugs crowding over a dead mantis and crawling all over a frog, a cancerous growth metastasizing on a crab, a swarm of flies gathered on a man’s back, what appears to be bacteria or mold spores rapidly proliferating, and a widening hole on an outstretched human hand—perhaps a terrifying time-lapse of a flesh-eating wound. Many of the animals in the video are scavengers and decomposers. Crabs, lobsters, worms, flies, ants, fungi, and bacteria all feed on dead things. In doing so, they break down organic material and make vital nutrients available for the ecosystem’s primary producers, namely plants and algae. Just as death is necessary for life, decomposition is essential for the emergence of form.

Architecture theorist Keller Easterling proposed a similar thesis in her 2014 essay, Subtraction. In it, she argues that construction, though dominant, is only one process by which architects can shape the lived environment. Architects are trained to build, yet there are no institutionalized studies on how to unbuild or subtract. “Methods of demolishing, imploding, or otherwise subtracting building material,” she writes, “are not among the essential skills imparted to architects-in-training.” Subtracting from the world, dismantling the structures we’ve built up, clears new spaces and shapes our lived environment as powerfully as construction. Like Laric’s decomposers, Easterling suggests that new and renewed realities can only come into being by tearing down old structures. Architects value construction because the results of energy expended is thought to be more visible. “The general consensus within the discipline,” she writes, “is that architectural efforts should be visible to photographs.” This, of course, is wrong. Even in the recent past, the destruction of walls, towers, and monuments register photographically, ideologically, and politically in their profound absences. An ethics of space emerges from what is not there or no longer there.

The last two scenes in Laric’s video depict a squid swimming across the screen past unknown floating globules, and what appears to be a time-lapse clip of a crowd of people milling around each other as if at a party or train station. The pairing of the squid and the human in these final scenes recalls Vilém Flusser philosophical treatise, Vampyroteuthis Infernalis (1987/2012), which probed the condition of being human through a biological exploration of the titular squid, the “vampire squid from hell.” Measuring about thirty centimeters, it lives in the deepest, most oxygen deprived parts of the ocean. Its eight arms are webbed together, giving it the impression of wearing a cloak, like a vampire. It feeds exclusively on “marine snow,” the tiny flakes of decomposed animals, feces, and plankton that drift into the abyss from above. When Flusser’s book was first published—four years before he died tragically in a car crash in 1991—no one had ever seen a vampire squid alive. Found caught in deep sea drag nets, floating on the surface, or washed ashore, it was a species that humanity knew only in its death. Our lived environment and that of the vampire squid cannot be further apart. Indeed, just as it finds death as it approaches the ocean surface, humans cannot survive in the cold, pressurized, dark waters of its home; humans and squids are separated by half a billion years of evolutionary divergence, yet we shared an ancestor once, deep in the past. Flusser saw the ocean surface as a magic mirror. We can learn of the human condition by probing its antithesis. Like the promise of renewal represented by Laric’s decomposers, or the value making logic of Easterling’s subtraction, one of Flusser’s most striking discoveries was an ethical one that derived from the cephalopod’s form. Like humans, the vampire squid is bilaterally symmetrical. It differentiates between up and down, left and right, and given these formal attributes, Flusser argues that it must also be a dialectical thinker. Like us, it must “deny one side from the position of the other.”

The squid is also a vessel, a bag. Its internal organs float freely within its body or mantle—the part humans like to slice into rings and deep fry in breading. The hollow of the squid is often used like sausage casing and stuffed with other ingredients; stuffed squid is enjoyed by coastal communities around the world. What would Flusser say about this? Forget aesthetics, forget philosophy, what if humanity’s key form of interaction with the world is simply a metabolic one, adding to our biomass as we subtract from the world? If Laric’s video suggests a topological affinity between all organisms—humans, squids etc.—the monster at hand is not a vampire, but rather, a cannibal.

CARSON CHAN is an architecture writer and curator based between Princeton and Berlin. He is a lecturer on architecture and ecology at the University of Pennsylvania and is completing his doctoral research at Princeton School of Architecture on the architecture of public aquariums in the United States during the rise of environmentalism. He was co-chief curator of the 4th Marrakech Biennale (2012), and executive curator of the Biennial of the Americas (2013). His most recent book is an edited volume of essays on the artwork of Andreas Greiner called Life Forms (2020).