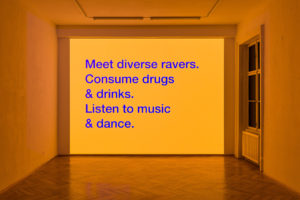 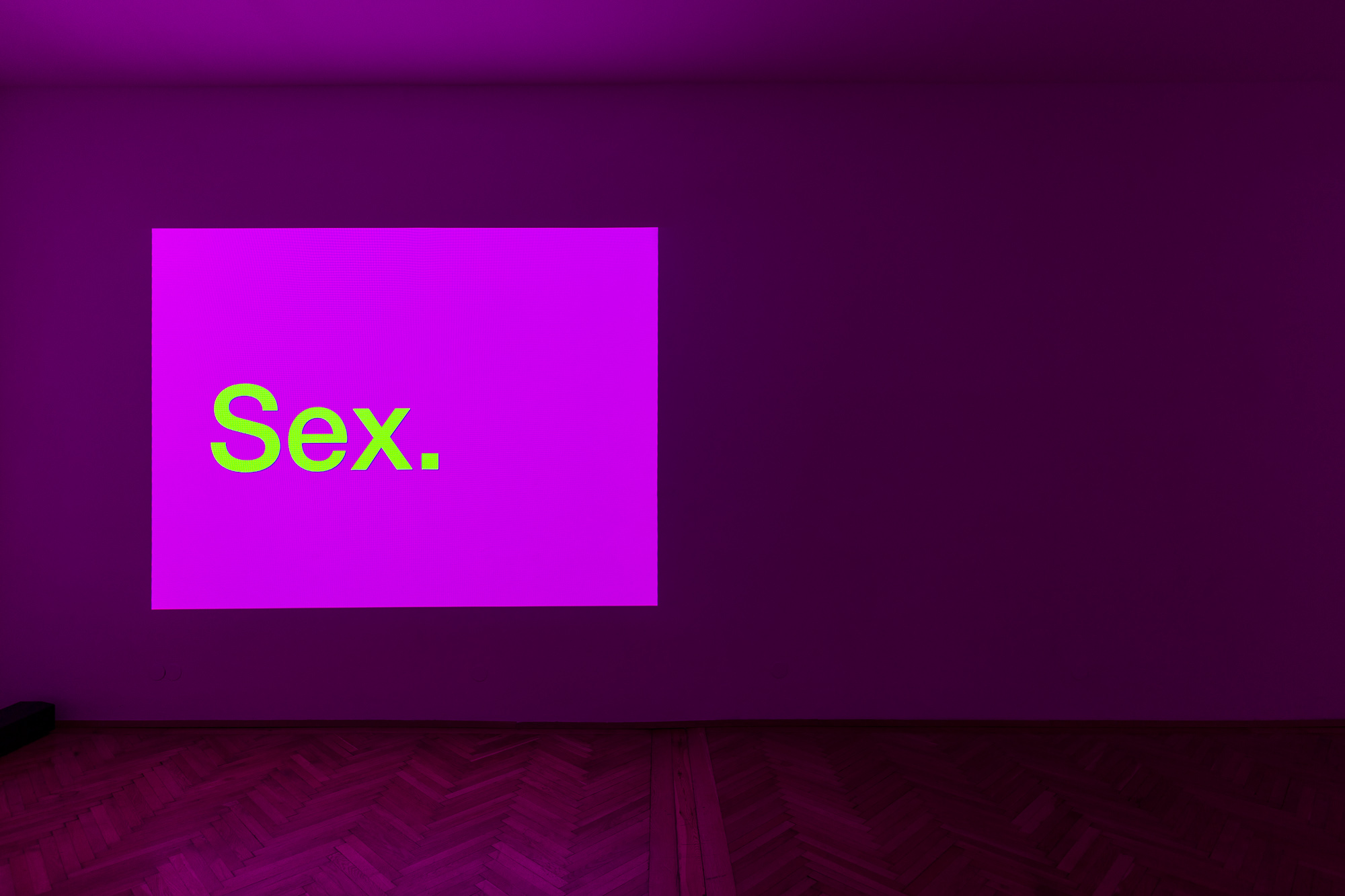 “We won’t stop living this way,” reads in orange letters on fluorescent blue. It is the final sentence in Rainald Goetz’s novel Rave, published in English in 2019, two decades after its original release. Rave, in its mashup of authenticity and fiction, celebrates the freedom of collective dancing between Munich and Berlin, but the unique temporality of the club experience starts to make way for a synchronicity of music and drugs. With its fragmented, disjunctive style, Goetz’s prose captures the immediacy of a counterculture-turned-mass industry that, by the end of the ‘90s, had lost much its former subversive substance.

Music, its lyrics, beats, tropes, and the affects it produces, have always been key to Tony Cokes’ work, and in SM BNGRZ, his solo exhibition at Felix Gaudlitz in Vienna, they take center stage. Intercutting passages from Rave with fragments of culture studies on the roots of the British raver scene, gendered DJ culture, the political potential of acid house and the queering of the disco, SM BNGRZ unfolds in three distinct films projected in a nonlinear mix, one installation and some light boxes. In the videos, the narrative of dance floor mania with its invitation to join––“Meet diverse ravers. Consume drugs & drinks. Listen to music & dance”––collides, amongst others, with the sociopolitical facets of British garage sound and dance culture of the early nineties, retrospectively the “first trans youth movement” with a sharp view on class stratifications in Thatcher’s empire. Text and sound create an immediacy that bridges contemporary readings of transgressive dance floor politics with Goetz’s realtime report on hardcore partying. 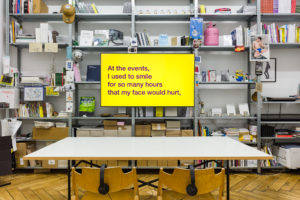 SM BNGRZ takes the affective potential of electronic music and dance tracks as signifiers of deconstructed social and sexual differences, as articulations of class struggle and tools for empowerment. It reframes body politics and points to the fact that many of the Black roots of electronic music have been completely overlooked. What strikes most in Cokes’ unique process of sampling and re-contextualize is the intersecting of time and perspective in the juxtaposition of a prose text written at the time of rave culture’s slow decline into mass event and commerce, and theory-fuelled recollections from more recent times: emphatic nowness meets historical analysis and something third develops.

The mutually commenting of the elements works perfectly when Cokes’ videos, with their animated text and solid colors, transform the gallery space into a pulsating club. Rhythmic beats inform the essay-like reflections and enhance the spatial transformation that cries for a crowd while its emptiness causes a feeling of nostalgia. Text snippets recall a euphoric past full of energy and resistance that challenged pop culture’s capitalization before it crashed to become just another asset of culture industry. 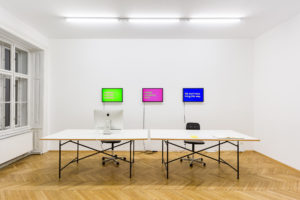 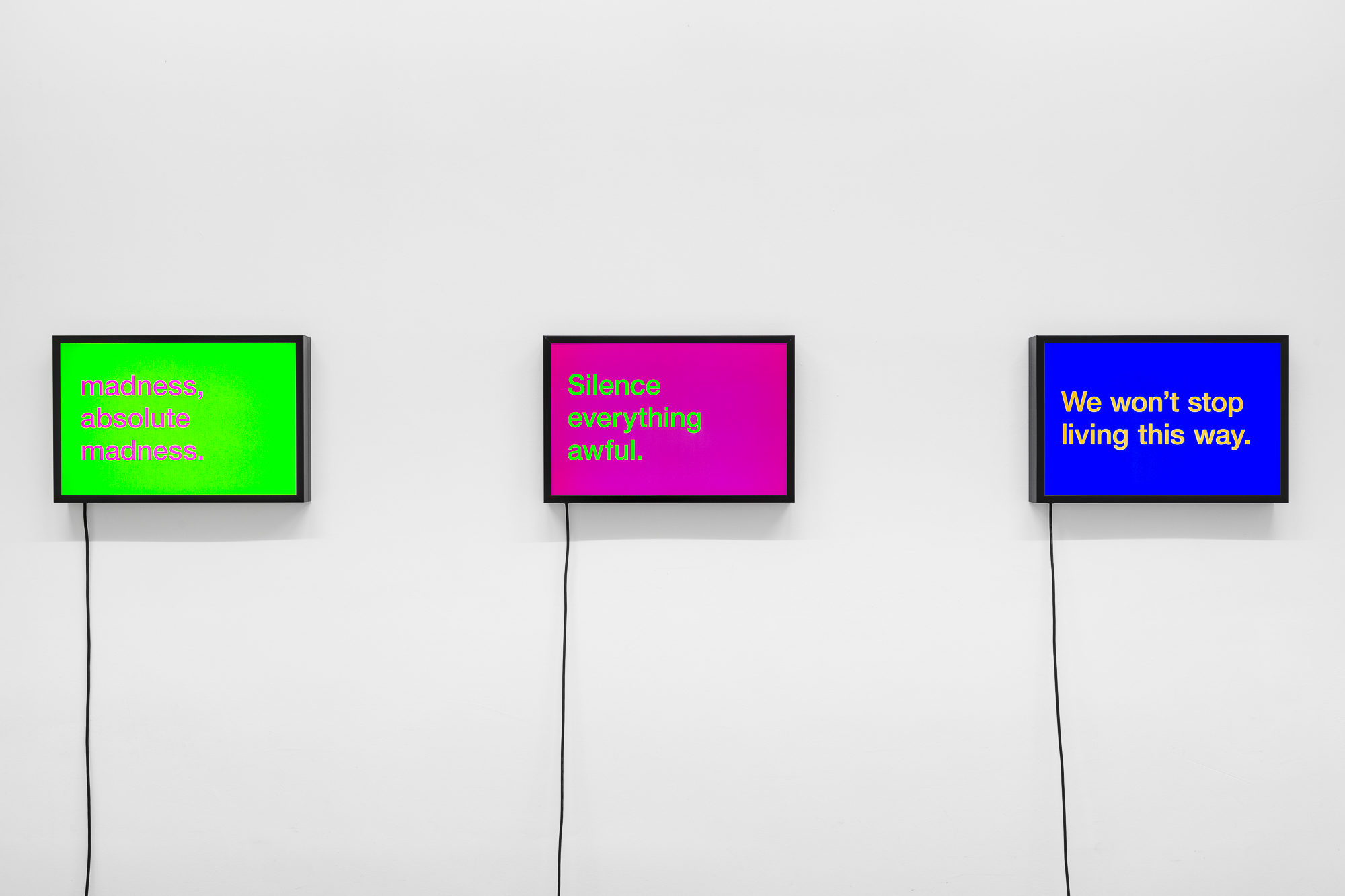 But Tony Cokes is not Mark Fisher, therefore his ghosts of history are not imprisoned in a loop of a continuous future past. This is an appeal as intellectual as emotional, full of dance floor anthems and disco classics, to get things moving, to take up the discourses of former rave and club culture and look what can continue to emerge from it. Music, the artist said in an interview, seems to reflect social transformation, and it is hard to imagine a social movement without sound. It comes as no surprise that many of the tracks used in SM BNGRZ are remixes from recent years, themselves a product of reworking and revising, of linking past and present. A dance culture able to deconstruct ideas about race, class, to question social and gender norms, has found and will find ways to keep these potentials activated. The club as a hub of community may be temporarily closed, but Tony Cokes’ cut & paste of sound, color and ideas provides the material to deepen its political resonance. Reading this material, is our turn.