Utopia in Bursts: The Institute of Queer Ecology

Some grey and putrid mass had washed onto the shores of Fire Island’s historically gay and affluently-populated Pines, perfuming the summer air with the jolting aroma of rotting animal fat and offal. A group of young, slender white men jogged past, in inexplicably close proximity to the unidentified corpse. “What is that?” one of the men inquired. “It’s a dead seal,” offered Lee Pivnik.

Pivnik was one of well over two dozen artists, researchers, musicians, writers, and poets participating in turns as the Institute of Queer Ecology (IQECO), observing and documenting instances of queerness in the island’s flora and fauna—moments that shied away from the prescripts of binaries; grey areas. “Oh,” responded the jogger. He shot the sweltering heap a faint grimace. Pivnik’s disposable camera clicked, capturing what would be referred to henceforth as “twinks fascinated by a dead seal.”

Founded in 2017, IQECO was initially created as a kind of lie. “It came out of a class I was taking at RISD called ‘Pants on Fire’ that focused on artist practices rooted in lying or stretching the truth,”Pivnik explained. Inspired by groups like the Yes Men, the institute was born out of a desire for an art practice that could catalyze change and engage in the world more directly than a sculpture or a painting. Pivnik was particularly interested in creating something that could subvert mainstream environmentalism. 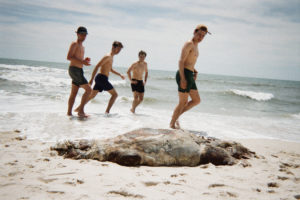 “Conservation, for one, is so conservative! The idea that nature is this thing so separate from us that needs to be protected and untouched,” they said. This attitude of environmental purity and otherness has proven itself to be problematic, frequently enabling environmental racism and colonialism—the history of the U.S. government displacing and disenfranchising Native American populations in the name of national parks preservation is a case in point.

A pervasive and narrow-reading of Darwinian evolutionary theory provided further cause for queer subversion. That reproduction and competition is the crux of all life on earth is one the earliest, most fundamental principles taught in biology, summarized roughly as the “survival of the fittest.” This limited understanding, however, has led to a harmful and widespread determination that, scientifically, queerness is unnatural when it is anything but—biology is brimming with instances of queer life.
From the lifelong bonds of same-sex female bird couplings to bonobo group sex to hermaphroditic and gender-swapping fish, Canadian biologist Bruce Bagemihl’s euphoric 1999 text, Biological Exuberance, cites studies observing perfectly natural queerness in over 450 species. “Homosexual behavior occurs in more than 450 different kinds of animals worldwide, and is found in every major geographic region and every major animal group,” he writes. “It should come as no surprise, then, that animal homosexuality is not a single, uniform phenomenon. Whether one is discussing the forms it takes, its frequency, or its relationship to heterosexual activity, same-sex behavior in animals exhibits every conceivable variation.”

“I’m an evolutionary biologist; the work I do depends on procreation,” said Nicolas Baird, an artist and researcher at the Natural History Museum in Berlin and frequent IQECO participant. “The problem is that there’s an overarching attitude that it is the core of the story of life rather than an element. Another critical element to life, for example, is exchange—plants exchanging CO2 for oxygen or fungal networks supplying communication pathways for trees.” Modeling itself after these cooperative frameworks, the institute’s approach to the natural world is collective, intimate, entropic, and sticky.

In a sense, IQECO operates as a research institute in drag, donning the clothing of scientific research in order to subvert prevailing scientific biases and agitate for an inclusive, decolonial, multi-species future. In its own words, IQECO “passes” as an institute in order to infiltrate mainstream science. The uniforms are the most literal example of this. Dyed in 2017 with the help of artist Felix Baudry, the lavender/orchid fuchsia-colored jumpsuits are a wonderfully camp homage to the history of uniforms in science—from NASA to Biosphere 2 to Mars 500—and highlight the performativity of scientific research.

“One of our goals is to broaden who has the agency to participate in these scientific spaces,” said Pivnik. “It’s become a very IQECO thing to use an invitation from a museum or institution as an opportunity to jam our foot in the door and say, ‘Okay! Everyone in!’” In the three years since its formation, the institute has included over 100 participants in a multitude of applications and iterations, all the while resisting to conform to a specific organizing structure; IQECO operates somewhere between artist collective and curatorial platform, with a preference for the term “organism”.

Slime molds are a good analogy. These eukaryotic, single-celled organisms have the ability to either live as free, individual agents or come together when resources are scarce to form multicellular structures capable of reproduction, effectively acting as a collective singular to complete a specific task.

Like the slime mold, for IQECO, the call to collective action has given rise to a variety of forms and shapes. It has acted as a guest editor, a publisher, an essayist, a curator, and has created its own body of artistic output, all through a constantly rotating cast of inquisitive individuals.

Earlier this year, IQECO released a series of videos commissioned by DIS for their edutainment video streaming platform, dis.art. Entitled Metamorphosis, the four-part visual essay forms a kind of manifesto in miniature for the institute, calling for a radical transformation of how we relate to and think about the natural world in light of our deepening environmental crisis.

Currently, the institute is working on another commission, this time from the Guggenheim. Asked to develop a public program to accompany the museum’s current Rem Koolhaas and OMA exhibition, Countryside, The Future, initially, the institute had hoped to lead an in-person activity—that, of course, was before COVID-19. Since then, the institute has done what it does best; shapeshift.

The adaptive result is now a downloadable program where participants will co-create a virtual queer commune via a lavender jumpsuit-clad avatar. “We were thinking critically about where queer communities exist in relationship to cities and land,” said Pivnik. “The queer commune movement felt like the perfect venue for thinking about intentional community and queer geography in relation to the countryside.”

As participants navigate this virtual commune, they are invited to upload and interact with texts, artworks, and resources shared by other users in relevant spaces. While the work is still in progress, IQECO expects it to be online by the end of the year.

Where the institute is headed from there is a mystery. “Given that this is something that started out as a purely speculative idea, it’s difficult to say when the institute became or becomes ‘real,’” reflected Pivnik. “Is it the first time we made an Instagram post? Or the first time we received a commission? Maybe it’ll be when we have a brick-and-mortar space.”

Pivnik was particularly fond of the summer IQECO spent on Fire Island as part of its residency with BOFFO. Though temporary, it was the only time the institute had a physical home. “While we were there, I came to an understanding of utopia realized in bursts; that it’s something that comes in waves,” said Pivnik.
In the final chapter of its dis.art series, Blanco explains that the final stage of an insect’s metamorphosis is called the imago or imaginal stage. “Fittingly, the plural of imago is imagines [pronounced: ee-may-gah-neez]—a homograph for imagines,” narrates Blanco. “A moment in scientific jargon that works perfectly in this context.” And so too in the context of imagining the future manifestations of IQECO.

“The things that have made it joyful and fun have been the free collaboration and openness—the seeking out of new and different ways of, to borrow a genetics term, recombining to make these projects cohesive,” said Baird. “Those are things that I’m sure will stay with the institute forever.” 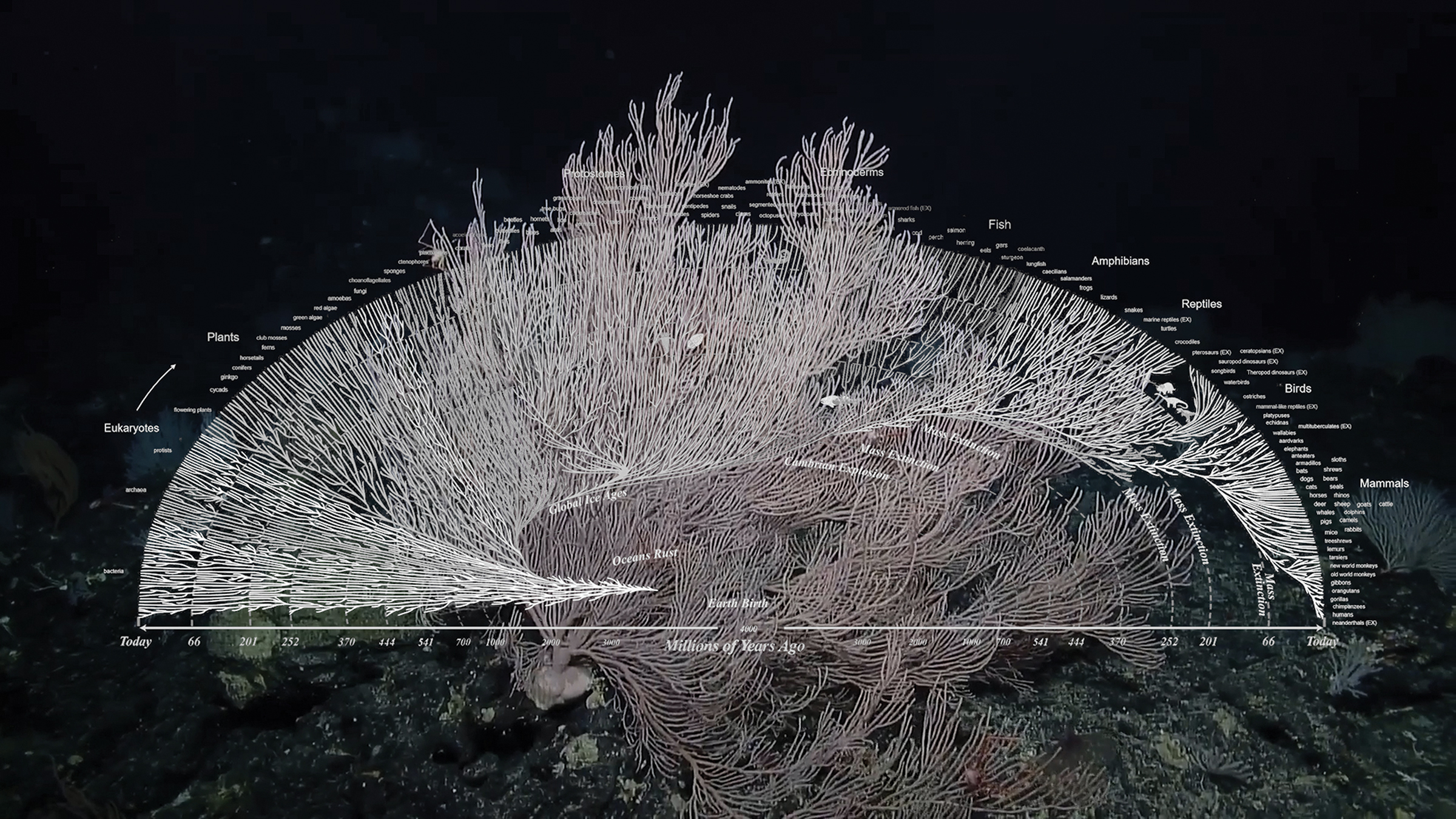 THE INSTITUTE OF QUEER ECOLOGY (IQECO) is a collaborative, decentralized organism that works to imagine and realize an equitable multispecies future. With interdisciplinary programming that oscillates between curating exhibitions and directly producing artworks/projects, the Institute of Queer Ecology lays the groundwork for a (bio)diverse utopia.

SHANNON LEE is a New York-based writer and a co-founder/senior producer at Silica Mag, a field guide to the emerging Anthropocene. She is also currently an associate editor at Artsy. Shannon acknowledges and pays her respect to the Matinecock people, on whose ancestral lands she works.