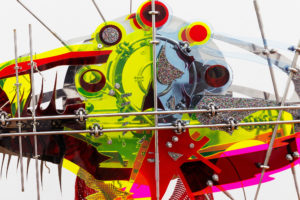 Valerie Keane moved to New York City in 2007 which was the same year that a group of Downtown bad-boy artists reached their peak of notoriety. For instance, Terence Koh had a solo exhibition at the Whitney that consisted of a room filled with extraordinarily bright lights. In summer of 2007, Dash Snow and Dan Colen exhibited their Nest performance at Jeffrey Deitch Projects, which, as the press release describes, “invited fifteen fellow artists including Aaron Bondaroff, Hanna Liden, Jack Walls, Nate Lowman, and Adam McEwen to Grand Street, and from midnight to 8am, rolled around together in the waist-deep shredded paper to create this piece.” Glamor, depravity and excess were the ideological hallmarks of the art that was creating a buzz.

Keane’s sculptures could be interpreted as the perverse off-spring of this older generation of artists. For instance Keane’s interest in Minimalism and sub-cultural significations overlaps with the work of Banks Violette and Sterling Ruby. A description of Violette’s exhibition at Team Gallery in 2007 resonates with the attitude laden semi-industrial fabrication of Keane’s own practice: “an exploded drum kit, its parts painted a charred black, and a stage-like aluminum frame with white lights outlining an abstract version of the Jägermeister liqueur stag’s head logo. Propane lines hooked up to the drum kit parts would, in theory, emit flames if they were turned on and lighted.” Keane’s work is less bombastic than Violette’s, but both artists have a shared sensibility that seems in sympathy with pyrotechnics. 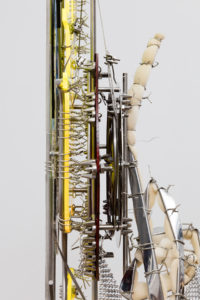 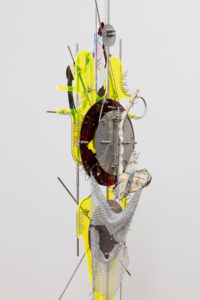 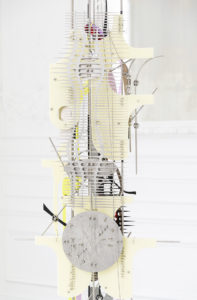 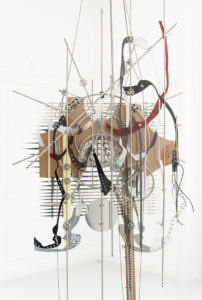 Looking back at 2007 we can see that it was the last hurrah of a contemporary art boom. Relaxed lending by banks had fueled a real estate bubble and it overflowed into the art market. In September 2008, the Global Financial Crisis hit New York hard. Where previously artists had been celebrated for shredding phone books and taking drugs, in 2009 and 2010 a radical belt-tightening of the entire economy saw galleries close and artists forced into retirement. The American unemployment rate for young adults would peak in June 2010 at 20%. As decadence turned to austerity, condo construction projects were halted and raw beams of steel stood like Mark di Suvero sculptures instead of becoming high rise apartments.

The beginning of the 2010’s was dogged by pessimism. Valerie Keane graduated from Cooper Union in 2012, joining a whole generation of Americans who were marked by the precarity of the Great Recession. When Keane first started to make her hanging sculptures there were few expectations of art world success, for even the stars of yesterday were struggling. Keane initially exhibited in artist-run project spaces, like Bed-Stuy Love Affair, where a two-person collaborative show with Jeffrey Joyal included a hanging sculpture with vertical metal poles with a cast hand affixed to it. At Signal gallery in Bushwick, a large warehouse-like space that closed in 2018, Keane showed a lurid green artwork that glowed with a vertical neon rod, suggesting some sort of alliance between Keith Sonnier and teenage frustrations. Keane’s sculptures from this period were particularly punk and were clearly a response to the jilted experience of New York’s fragmented economy.

Over time, Keane has refined her sculptures and they are now lovingly crafted objects. The materials that Keane uses are largely industrial and commercially available and surprisingly modest. For instance thin sheets of Perspex, sometimes colorful and other times clear, are cut by laser. The metal that is affixed to her sculptures often has patterning that is made with water jet cutters. When MDF is used it is sliced with a CNC machine. As Keane makes clear when discussing her artworks, these processes are guided by herself or a collaborator and are surprisingly laborious. Nothing beside the hardware is readymade. There is something baroque or even nihilistic about using recent industrial techniques to make functionless objects that are elaborately hand crafted. The sculptures seem to revel in the futility of technological progress.

The curvilinear shapes that have become a hallmark of Keane’s style are a whole other set of aesthetic propositions. Reminiscent of Art Nouveau, which is an art movement similarly induced by fin-de-siècle anxiety, Keane points to visionary Belgian architect Victor Horta as an influence on her work. The gothic elements also make one think of Swiss Neo-Surrealist H.R. Giger who was recently the subject of a survey exhibition at Lomex in New York, which is the same gallery that Keane works with. Keane has said that she looks at architecture almost as much as she looks at art and in many ways her sculptures are like architectural fragments, similar perhaps to the quixotic sculptor, architect and theorist Frederick Kiesler. At her recent exhibition at High Art in Paris, Keane’s sculptures were evenly dispersed throughout the spacious 19th-century architecture of the gallery and the curves and lines of the artworks created feedback loops with the vaguely Art Nouveau moldings.

Keane’s sculptures are relatively opaque and elusive and while they hint at a whole gamut of potential references, they ultimately evade the viewer and leave them with something more emotional. The scale of the pieces make it tempting to read each sculpture as a surrogate for the human figure and there is a visual similarity to certain robotic figures in the work of Bauhaus artist Oskar Schlemmer which Keane professes to admire. When pressed about these figurative associations though, Keane insists that this is more a pragmatic accident as she has to lift and move the objects in her studio and so they cannot be too much larger than herself. As we dig further into Keane’s sculptures they resist interpretation and stand as independent facts. They are resolute and finite compositions. There is almost an appearance of anger or violence in the sculptures but they are made with the utmost delicacy and control. It is in this sort of tension, between the object and its image, that Keane thrives, and where the work is most fascinating. 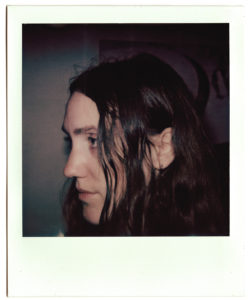 ROBERT McKENZIE is a writer and curator. He wrote The &-Files: Art & Text 1981-2002 with Paul Foss. Between 2015 and 2019 he was Artistic Director with Beata Von Oelreich of Rehnsgatan3 in Stockholm, curating exhibitions and performances with Bernadette Corporation, Emily Sundblad and Diamond Stingily among others.