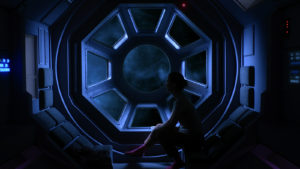 Taking its cue from the trope of vampires, the epistolary novel Dracula, 1897, strongly resonated with the anxiety of the Victorian era and the fears of its patriarchal society when coming to terms with gender, sexuality, and diseases. Heavily influenced by Sheridan Le Fanu’s short story Carmilla, 1872, Bram Stoker’s polyphonic fiction – there is no single protagonist – intersperses diary entries, letters, and newspaper articles. Epistolary is not only a literary genre adopted in the scope of the narrative, but it also functions as a mental shelter providing information regarding the psychosomatic processes of each character.

Self-reflectivity, conceived as a significant attribute of the diary novel, is a trait that characters of Vampires in Space, 2022, likewise experience through their centuries-long journey to a faraway planet. In their immunity to natural death, vampires are the ultimate beings to deal with the infinity of spatial and temporal distances. This choral cinematic tryptic, conceived by Pedro Neves Marques in the frame of the Official Portuguese Representation at the 59th International Art Exhibition La Biennale di Venezia and curated by João Mourão and Luís Silva, pivots on a family of vampires leaving the Earth to settle into a different world. Nonetheless, they languish in a present continuous made of haunting reminiscences of their previous terrestrial live. As Neves Marques suggests, Vampires in Space is not merely a voyage through  space but rather a voyage to the protagonists’ inner spaces. The members of the crew are all being constrained into a small shuttle floating among celestial bodies. It is counterintuitive but their relationship inside and outside the cell passes through a physical distance, as their bodies barely touch each other. 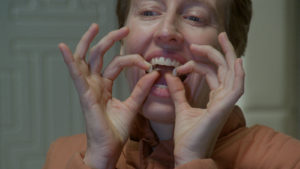 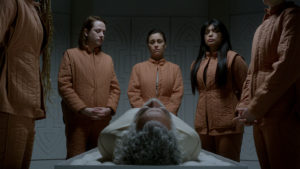 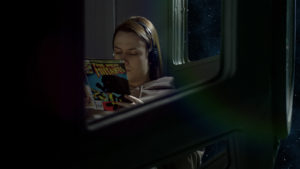 Sit in an (meta)spaceship designed on the second floor of the Gothic Palazzo Franchetti, we are looking straight into Emma’s eyes. In a break of the fourth wall, we voyeuristically inhabit their dimension by catching up via video messages, experiencing at once the science fiction movies aesthetic and the Zoom effect our recent times forced us on. Emma seemingly speaks via – or to – an AI, recording for an unspecified subject. Are we the listeners from the past or the future? A sense of an impending resolution affects them. Suffering from amnesia, Emma only remembers their past lovers’ scents and touch. They hold onto somatic memories made of gymnastic sessions, painful displacement, and neglected circadian rhythms. The body does not forget. But what to do when you don’t trust your body? Ità, the former commander of the mission, queries to the camera while dealing with insomnia. The perception of the self is put at stake by the impossibility of dealing with no society but their non-nuclear family, which functions as an embryonic cluster of conflict, negotiation, and acceptance. We are not an easy family. But we are all we have it, right? Alterity is experienced through isolation, loneliness, and confinement. Despite the human-like lifestyle they are carrying on, Emma’s feeling of not belonging is clearly perceived at the death of the last human on board. Humans can be more vampiric than us. Always pretending what they are not. Always rehearsing their humanity, Selena stresses in their recording session. With his departure, the final link with the Earth seems cut off. The last enemy, who refused to transition into a vampire, is gone. Is the category of violence gone with him though? 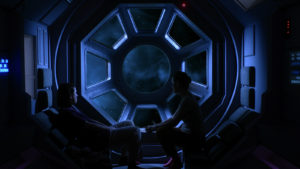 A psychological distress that results from an incongruence between their human appearance – through which they fugitively disguised yet recognized each other in the Earth – and their vampiregender[1] identity permeates their immortal existence. Such a dissonance is vividly transposed in Alex’s gesture of removing their dental prosthesis from the mouth at the end of the first chapter of the trilogy; a scene which spills into the next chapters, as many others. Each character is stuck in a seemingly metamorphic process, where transition is never accomplished yet it is permanently invoked. In such a state of inbetweenness, the protagonists respectively rely on Marvel comics, poetry, flashbacks of their previous life, in an attempt of unleashing the strains of incommunicability.

Vampires in Space guides us through an open-ended chronicle on the role of fiction, affection, and care in those lives which are marked by transgender experiences, gender dysphoria, and mental health awareness. The muted conversation between Ità and Alex in the penultimate scene of the film unfolds the struggle in empathizing with and communicating our traumas through words. Our streams of consciousness, epitomized by the epistolary genre back in the 19th century, are not necessarily the only way to collect our psychosomatic processes. In fact, it is in a gesture of bodily disclosure that Ità succeeds in offering their own alikeness in diversity to Alex, proving that even in the space of our inner fears, it cannot always be night. 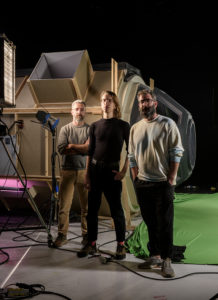