Walter Hopps will be here in 20 minutes 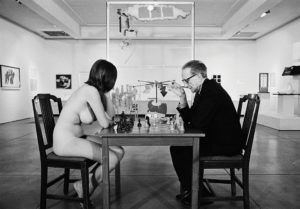 “To me, a body of work by a given artist has an inherent kind of score that you try to relate to or understand. It puts you in a certain psychological state. I always tried to get as peaceful and calm as possible. If there was a simple way of doing something, I would do it that way.” Walter Hopps.

That morning in October 1963, Walter Hopps felt a special sensation at watching his mistress naked playing chess with his favorite artist, the one who had opened his eyes on the art world. The famous photograph that Julian Wasser took before the opening of Marcel Duchamp’s retrospective at the Pasadena Art Museum in 1963 portrays Eve Babitz naked, playing chess with the French artist, with The Large Glass in the background. It’s hard to find an image more contemporary than this: in 1963 Duchamp, who for decades had devoted himself exclusively to chess, at the age of 76 had his first retrospective. The character of Eve Babitz appears as a key in understanding the art scene of the West Coast at the time: a scene at once young, bold, aware and extravagant, featuring at the same time local artists and some of the main artists of the 20th century, still unfeatured in the museum context.

Walter Hopps is one of the central figures in the American postwar art scene, able to shake up the contemporary Californian art scene and connect it with both the New York setting and an international context.

It all began with Hopps regularly visiting Walter and Louise Arensberg, major collectors of Surrealist art pieces and owners of one of the most important collections of works by Marcel Duchamp. Thanks to the couple, Hopps not only had special access to an extraordinary and vast body of works, but also had the great opportunity to meet Duchamp, a guest of the couple; an encounter that proved decisive in Hopps’ subsequent development, influenced by the artist’s personality and interests. 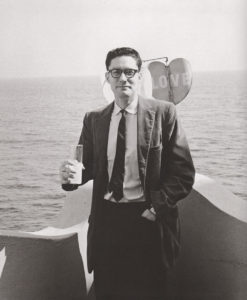 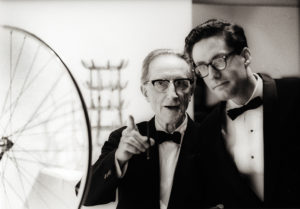 Moved by a strong opposition to the dominant culture of those years in California, while still a student at the University of California in Los Angeles, Hopps made a radical move and with some friends opened the Syndell Studio, an alternative exhibition space aimed at presenting the most cutting-edge art scene of the time, which would otherwise not have found space in the conservative and McCarthy-influenced environment of the era. Among others, exhibitions featuring Edward Kienholz and Craig Kauffman were held there. Located in a commercial space in the Brentwood area, the Syndell Studio was the first place in the Bay Area to focus on Abstract Expressionist artists. The gallery was hardly ever visited if only by a few friends, and its uncompromising avant-garde program was at the time derided in Los Angeles, not at all open to the contemporary artistic production. In that period Hopps traveled to San Francisco to explore the artistic scene of the city, more lively and open than L.A., and the very close friendship he developed with some artists significantly marked his path. With Edward Kienholz, for example, in 1956 Hopps started organizing the Action 2 festival, which was attended by many Californian artists, and the following year (1957) again together they opened the Ferus Gallery. The gallery, initially not concerned with the market, only later addressed this aspect, especially after the arrival of Irving Blum, who would replace Kienholz. Hopps understood the importance of involving artists who were active in the artistic change of those years and managed to attract an increasing interest due to solo exhibitions of artists such as Andy Warhol (1962) – whom he had met in New York the previous year – with his series Campbell’s Soup Cans, or Ed Ruscha (1963).

Again in 1962, Hopps, at the age of 31, was appointed director of the Pasadena Art Museum, which he had long already teamed up with, thus becoming the youngest U.S. museum director. Despite the institutional position conferring authority and prestige to Hopps’ path, the activities at the Ferus Gallery remained central among his interests, as they could guarantee him a position of autonomy with respect to the selection and filtering mechanisms typical of the museum environment.

Already in 1961 at the Pasadena Art Museum, Hopps had curated the solo exhibition featuring his friend Kienholz, who showed an amazing ability in setting up “a realistic, everyday imagery, an art of repulsion, as opposed to the narcissism prevailing in Abstract Expressionism,” while the following year the Kurt Schwitters retrospective (1962)2 highlighted equally central themes of the artistic exploration of the decade, such as the assemblage and the relationship with the real world. 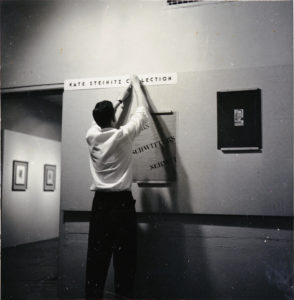 The same year Hopps organized the legendary New Painting of Common Objects3 exhibition, where eight U.S. artists who were to become the protagonists of one of the most influential movements of the 20th century, Pop Art, gathered together for the first time, even if not under the label of Pop, which was first used on the other side of the Atlantic Ocean by Lawrence Alloway. The exhibition was born from Hopps’ trip to New York and meeting with the key figures of Warhol and Liechtenstein. At the behest of Hopps, all aspects of the exhibition project, from communication to publishing products, formed an integral part of the exhibition, including a box containing editions created by artists and a poster designed by Ed Ruscha.

During the following year, 1963, Hopps opened a great retrospective featuring Marcel Duchamp at the Pasadena Art Museum4, which represented a really extraordinary event. Even Andy Warhol, who was not present at his own exhibition at the Ferus Gallery a few months earlier, arrived from New York to attend the event. During the opening, Duchamp played chess with Hopps and signed the tablecloth as if it were a ready-made piece. The other personalities attending the opening also signed the tablecloth, including Warhol himself who signed with the pseudonym of Andy Pie. The tablecloth became a kind of diagram of the relations active at that time and a testament to the fundamental importance of that event in the Californian scene of those years.

After spending five years at the Pasadena Art Museum, Hopps moved to Washington and began working at the Washington Gallery of Modern Art – an independent space known for its exhibitions on the Color Field Painting that had characterized the previous decade – which later merged with the Corcoran Gallery of Art. Here too Hopps (who was its director from 1970 to 1972) stood out for his attitude to research, with exhibitions featuring Gene Davis and the Hairy Who Group from Chicago, as well as the pioneering work of Paolo Soleri and David Smith. Hopps was fired in 1972, probably because of the clash between his vision and that of the institution’s directors, of his absenteeism and his attitude which was not easy to understand for the mentality of the time. A button – ordered by the staff of the Pasadena Art Museum who was frustrated by his unavailability, and then re-created at the Corcoran Gallery – remains famous, reading “Walter Hopps will be here in 20 minutes.”

Between 1972 and 1979 Hopps took charge of directing the Department 20th Century American Art at the Smithsonian American Art Museum in Washington, where he curated, among others, the first major retrospective featuring Robert Rauschenberg. Also in 1972, he was called to curate the U.S. pavilion at the Venice Biennale, presenting on this occasion the works of Diane Arbus. This was the first time that photography had been dedicated such a space in the Venetian institution context and that a female artist was invited to represent the U.S. During those years, within the large building of the MOTA (Museum of Temporary Art), Hopps organized Thirty-Six Hours (1978), an exhibition that questioned the ordinary method for the selection of artists: for the occasion, the curator circulated newspaper ads and radio broadcasts inviting anyone who wanted to participate in the exhibition. Anyone could exhibit a work (there were only size limitations) and no one would be excluded: the works could be exhibited from a minimum of thirty-six hours to a maximum of thirty-six days.

By the late ’70s Hopps moved to Houston in the museum of one of the most interesting American collectors, Dominique de Menil, whose vision found a match with the activities of the curator. In this period Hopps organized important exhibitions featuring Yves Klein and John Chamberlain and the fundamental retrospectives of Andy Warhol and Max Ernst.

During his career, Walter Hopps managed to build a local identity, distancing himself from the conservative mainstream which had dominated the California scene until then, understanding the importance of the role of artists and believing in the sharing of projects. This view found expression in the context of independent spaces and public institutions, as in the Pasadena Art Museum and the Corcoran Gallery. Although he worked on several occasions in museums, Hopps knew that contemporary art often moved beyond the limits of the institution, which was too rigid and slow in understanding the rapid movements that were subverting the art and society of that time. In his curatorial effort, ranging from Duchamp to Kienholz, from Ruscha to Warhol, and from Cornell to Rauschenberg, Hopps was able to express a clear determination in outlining an international art vision that was leaving its mark on the 20th century.