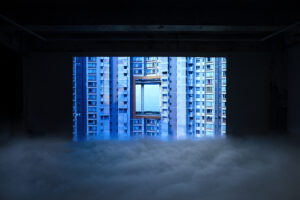 From Its Mouth Came a River of High-End Residential Appliances, 2018 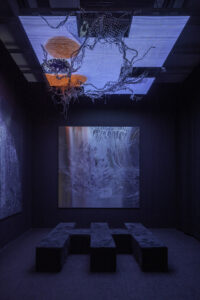 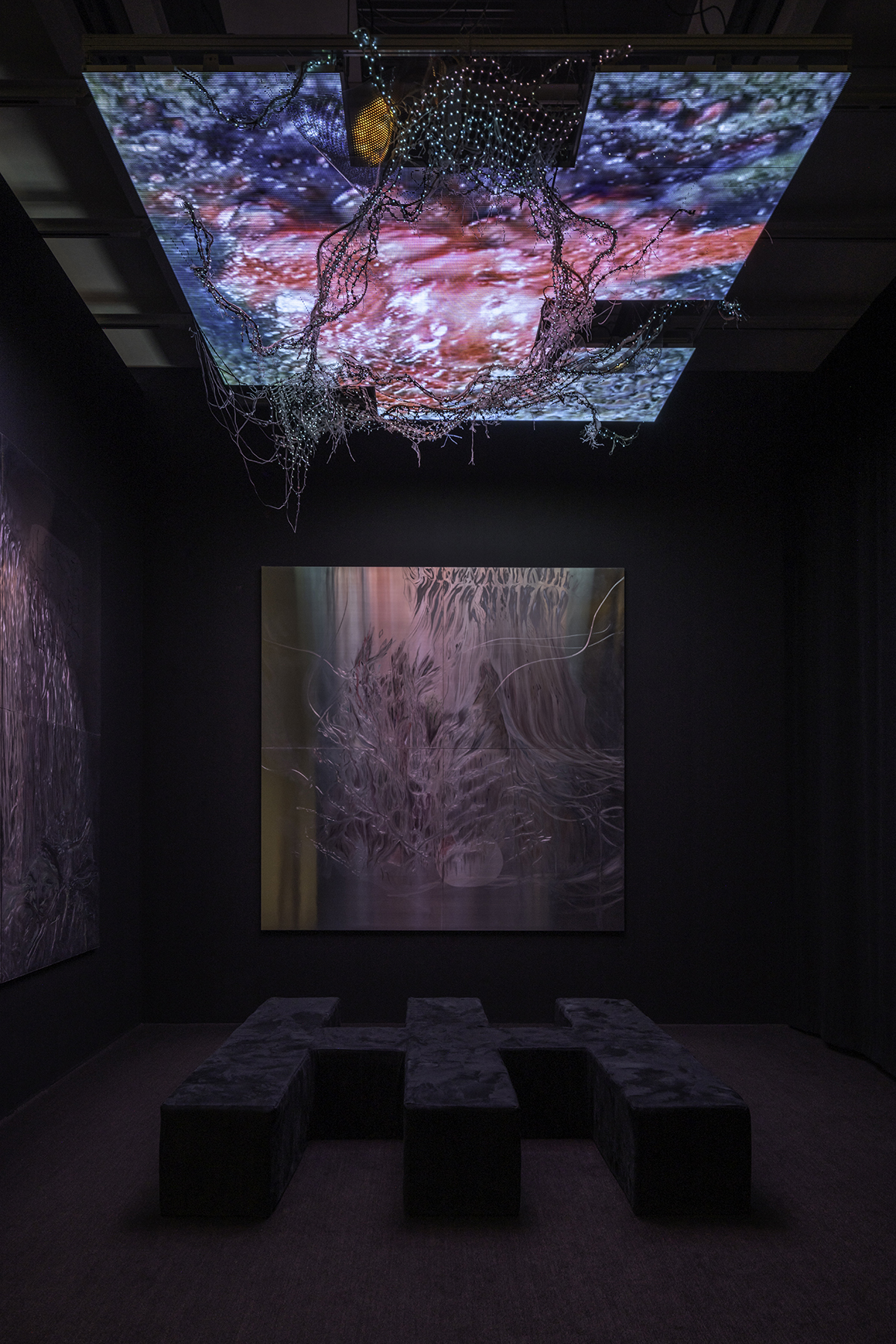 WangShui’s video, From Its Mouth Came a River of High-End Residential Appliances (2018), opens with a drone shot of a gaping hole inside a sky-high luxury residential complex facing the south China sea. This hole is one of many perforating the Hong Kong skyline, designed as ‘dragon gates,’ which according to the ancient practice of feng shui allows dragons to fly from the mountains to the ocean, and positive energy to flow through as a result. As the artist explains in the video’s narration, feng shui was banned in 1949 after the founding of the People’s Republic of China. During the Cultural Revolution of the late 1960s its practitioners were violently persecuted and fled to Hong Kong and Taiwan where their work flourished.

WangShui views these holes as representations of an “ideological resistance,” and describes them as “anti-monuments that oppose authoritarianism and monumentalism by comfortably assuming the form of voids.” In the video, the drones gradually proceed to fly toward these spaces, inching closer toward the gaps perforating the building’s mosaic of thousands of tiny windows. However, the image goes dark the moment the drones reach the holes as the piercing sound of a bell dings, denying the viewer the satisfaction of knowing whether or not the drones passed through or were cut off by interference or loss of reception. At one point WangShui speaks about their personal attraction to feng shui, describing it as “a slippery global phenomenon that always points back to unseen natural forces.”

The “unseen,” the “void,” the shifting, formless, inexplicable, and otherworldly is often exalted in WangShui’s work—the immaterial as primary material. This intermediate space or point of transformation that separates form and no form, interior and exterior, solid and vapor, image and abyss becomes the focus, the point.

In another piece, Gardens of Perfect Exposure (2018), the artist collaborates with silkworms, creating a tiny city for them composed of complex networks of chromed bathroom fixtures, roof repair fabric, laminated hair, chunks of aquamarine glass, and selfie ring lights. This maze of metal, glass, and lumens becomes the stage for the worms to circumnavigate, as they eat mulberry leaves and defecate silk cocoons. Camcorders surveil the scene, and livestream images are projected on the surrounding walls. The worms’ metamorphoses become subject as they transition in just several months from eggs to larvae to moths that lay their eggs and soon after, perish. This microcosm of birth, production, and death against a backdrop of mass-produced appliances and livestreaming devices could be a kind of metaphor for the strange loops of ubiquitous mediation that characterize our own existence.

Both of the aforementioned works form collaborations between the artist, machines, and natural forces, which can sometimes shift and bleed into one another. In From Its Mouth…, are the drone’s movements caused by the gentle strokes of the operator’s fingers on the joystick? Or is it the wind? Or perhaps a glitch in the device itself? And how did the silkworms in Gardens of Perfect Exposure become programmed to produce their silk cocoons? Is their behavior innate? Artificial? Or both? Silkworms have in fact been selectively bred and domesticated for thousands of years since silk was first used to produce imperial textiles in ancient China, and it now contributes to a 500 million dollar industry. Most are now found on silkworm farms rather than in the wild, and recently, some have been genetically modified with spider-genes to improve the strength of their fibers.

Considering these blurred boundaries between the organic and synthetic, it would be fitting that WangShui would collaborate with artificial intelligence for their recent videos and paintings. The artist has described their LED video sculptures Sliver (2019) and Weak Pearl (2019) as precursors to their work with AI for their “attempts to physically interpolate the latent space between pixels.” In Weak Pearl, for example, a tangled membrane of LEDs used for skyline billboard advertisements transmits an undulating, ghostly image. Barely discernable from up close, the individual pixels in the porous surface shift in brightness and hue. The further the viewer steps back from the piece, the more they can just make out an image of an animated radula—the toothed tongue specific to mollusks, which scrapes and cuts food prior to ingesting. In relation to this work, WangShui has cited how organisms in the deep sea become so entranced by the bioluminescent squid that they “commit sacrificial automutilation, offering their lives to the predator.” Similarly, the closer the viewer approaches Weak Pearl, drawn toward its light, the more they fall prey to what the artist describes as the “romance that drives so much of image culture today.”

The LED ceiling work Scr∴ pe (2021), WangShui’s first video collaboration with AI, is composed of GANs (general adversarial networks), a class of machine learning frameworks, which are trained on an evolving dataset of images that the artist habitually gathers. The “latent space between pixels” that the artist has described is thus specifically generated by this technology, which absorbs, morphs, merges, and concocts the images we see from this continually developing personal visual database. There are also active sensors in this work, which read the light levels in the room and the carbon dioxide levels from viewers. This information is then fed into the work itself to affect the pace and intensity of the images on screen. Thus, the work becomes an active participant in its environment, enlivening when viewers are present and slowing and dimming to a suspended state when the galleries are closed. The artist has noted that their work with AI is about “experimentation, deep learning, and ultimately syncing,” debunking the idea of the artist or artwork as singular or discrete, and acknowledging, even celebrating the fact that all images and ideas are part of an interconnected exchange between ourselves, our environments, algorithms, and forces beyond our control.

For the 2021 Whitney Biennial, WangShui presented a new iteration of Scr∴ pe in an environment surrounded by luminescent brushed aluminum paintings and plush seating for visitors to recline. Titled Scr∴ pe II (Isle of Viitr∴ ous) (2022), the work takes its name from the vitreous gel that fills the human eye, full of tiny fibers that attach to a light-sensitive layer of tissue, and acts a filter for images to pass to the retina. By referring to this gel as an “isle,” the artist imagines the viscous fluid as a “non-place that exists only between structures of perception.” WangShui has created their paintings through a similar collaboration with AI, developing programs to algorithmically generate new images from previous paintings. The artist then transferred these images to aluminum, using a variety of metal brushes to carve and scratch the surfaces into willowy, rippling abstractions, and layer thin applications of oil paint into their abraded lines, so the hues appear to emerge from beneath the refracted surface. WangShui’s largescale panoramic painting Hyphal Stream (Isle of Viitr∴ ous) (2022), developed for the 16th Lyon Biennale, is composed of five separate panels, which interlock on a mesh scaffolding. An aerogel chamber behind the mesh surface pumps particles of the synthetic substance in streams through the painting itself. Aerogel, the lightest solid on earth, is an apt medium for WangShui’s explorations—a solid with such a low density that it appears as an iridescent fog that might evaporate into thin air. Mining this vitreous-like space between structures of perception, WangShui challenges the validity of fixed categories of matter and being, opening up space for the lines between them to dematerialize and dissolve. 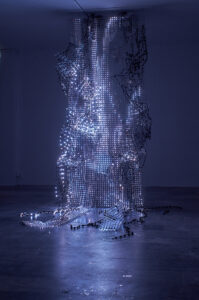 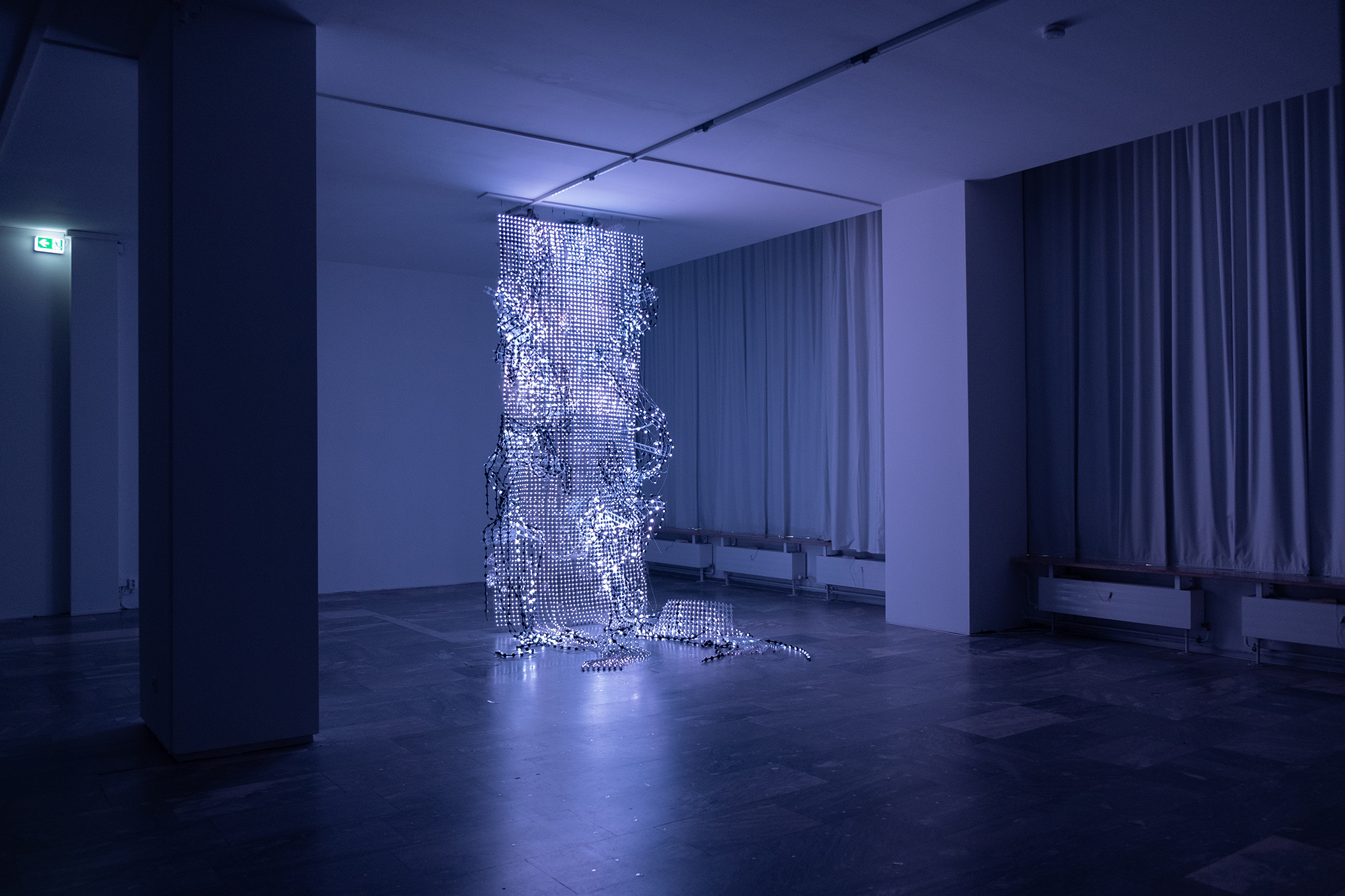 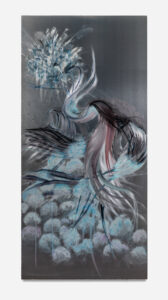 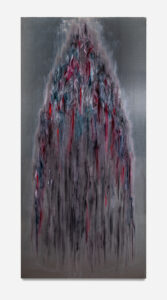 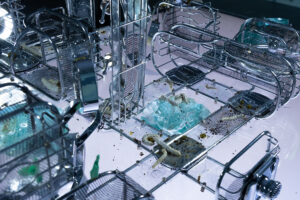 All images
Courtesy: the artist and High Art, Paris/Arles