Dialogue of the Dogs

Dialogue of the Dogs is Benedict’s first major solo show in Switzerland and one of his most ambitious exhibitions to date. The artist will use the institution’s two floors to present both retrospective works and new productions in the form of paintings, videos, and installations.
Will Benedict’s chimeric imagery draws as much from the history of art and literature as from advertising and pop culture. The strange characters that populate his videos are human-animal hybrids, layering the complex psychic depiction of literary characters with the anthropomorphic oddities used to sell us sugary drinks. The result is a bizarre alternate reality where people have rooster crests, ears instead of eyes and buildings take the shape of elephants. Through humor and nonsense, he points to the world we have created and the absurdity on which we constantly feed. 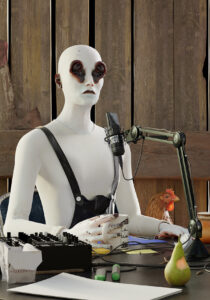 Will Benedict and Steffen Jørgensen, The Restaurant 2, 2021 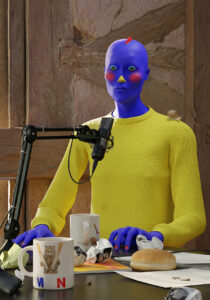 Will Benedict and Steffen Jørgensen, The Restaurant 2, 2021

The themes of delusion, perspective, and the satirization of power in Dialogue of the Dogs take their inspiration from The Deceitful Marriage, a story by the Spanish master Miguel de Cervantes. It tells of a sick man in hospital, feverish and delusional, who dreams of two dogs talking to each other. The dogs narrate their observations. They mock civilization—their masters are fools, brutal and corrupt. As roles are reversed and Cervantes gives the dogs the moral high ground, humanity becomes “dog-like,” barbaric and animalistic.
Will Benedict’s work does not seek answers but, on the contrary, asks many questions—about the problem of taking oneself seriously, the fallacy of moral hierarchies, the mess of being ethical, the problem of sincerity, and the value of stupidity. He portrays us as the animals we are but with the generosity of mutual implication. 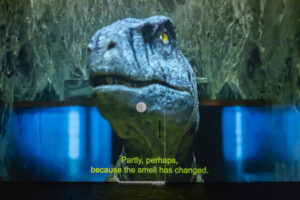 Time as a concept also permeates almost all the works presented—from a polaroid in which we see a baby born out of an egg to an uber driver trying to deliver food on time while hearing the eponymous song by Pink Floyd, or the omnipresent motif of a clock present in Cafe Wha? .As the artist states: “time holds everything together”.
This exhibition offers an opportunity not only to delve into Benedict’s imagery expressed through the moving image but also to see a large number of his paintings, photos, and collages assembled for the first time in one place. This work is consistent in tone with his videos and refers to the same dystopian world, looked at with a sense of irony; everywhere we seem to glimpse a hidden play, a double meaning, or an inside joke. 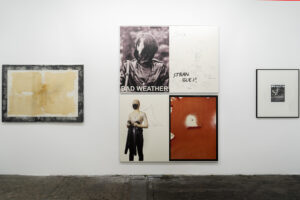 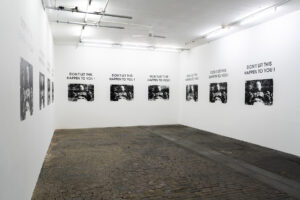 Will Benedict
Dialogue of the Dogs
Curated by Andrea Bellini