A CELEBRATION OF PAINTING!
Text by Loïc Le Gall 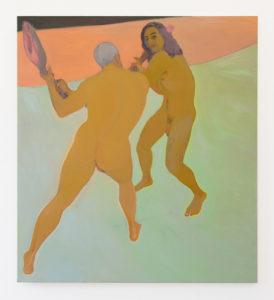 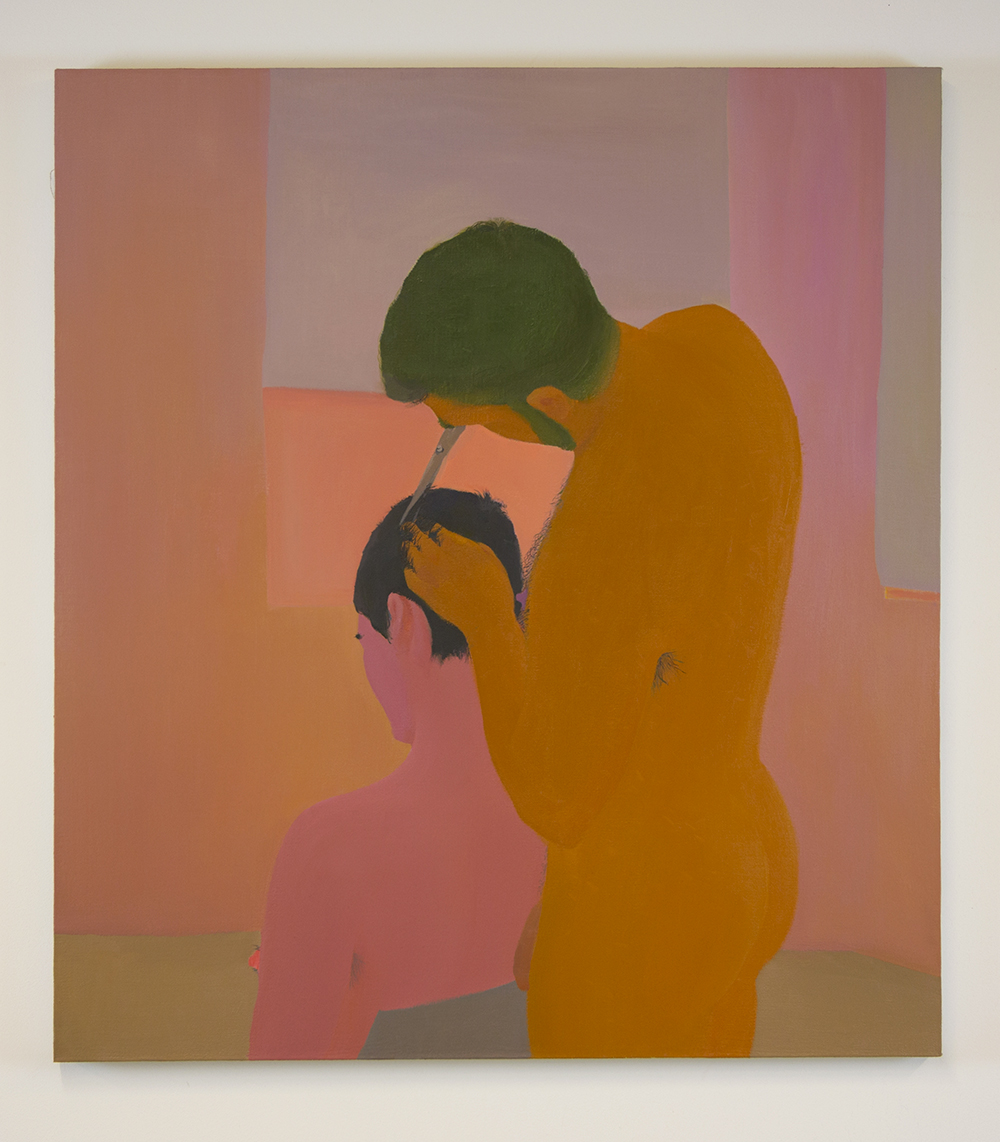 Painting has long been defined as lost. Its death has even been declared, planned. Yet every day, many artists are injecting it with a renewed energy and a healthy momentum. In contemporary Chinese art of the 1980s generation, this medium was drowned out by practices linked to technology, such as video or installation. However a handful of painters—mainly women, including Firenze Lai, Cui Jie and Xinyi Cheng—are emerging and attempting to offer an alternative to art marked by the international post-internet aesthetics. But Xinyi Cheng has not renounced contemporary tools, sometimes incorporating images into her paintings, or details taken from Instagram and Facebook, social networks that are banned in China. Xinyi Cheng was not subject to these restrictions, because she studied abroad, in the United States at the Maryland Institute of Art in Baltimore, and then at Amsterdam’s famous Rijksakademie. She had previously taken challenging, codified courses in sculpture at fine arts schools in China. Leaving her country for several years gave her a chance to experiment with a new apprenticeship model that was different from the ancestral teacher-student relationship, and it was also a way to learn more about the history of Western art. Although Xinyi Cheng initially developed her painting in the divergence of the Chinese tradition, she attentively studied the art of her predecessors. She is particularly captivated by El Greco’s art, especially by the complexion of his bodies and by his audacity on the margins of his era. Lately she has been changing her view of Chinese modernism, including Pan Yuliang, who sought to reinvent the intimate theme of the nude, depicting Asian, black or white women in a conservative, sexist world. Although she confesses to having a passion for works by Kerry James Marshall and Lynette Yiadom-Boakye, this enthusiasm cannot be solely attributed to their pictorial qualities. This would overlook the importance of marginal figures and minorities in her work. By more deeply understanding all of those oddities and means of representation, Xinyi Cheng is able to liberate her own forms. So for her, it is a matter of “feeling a presence” in the painting. Yet it is not a question of religiosity, but rather a spirit, a soul of the painting. 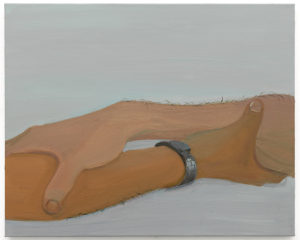 Xinyi Cheng’s painting is extremely lively, colorful and natural. It almost seems instantaneous. When this immediacy is evoked, it leads to discuss about the language of photography in her work. Her art is in fact very closely connected with it. First and foremost because she captures moments from life that serve as the raw material for her paintings, but also because she admires the worlds and atmospheres in the work of photographers like Nan Goldin and Wolfgang Tillmans. However, her painting is presented as a celebration of life and of delicate moments full of joy, and it deliberately avoids a dramatic or melancholic territory. It would be appropriate to see her painting as both a tribute to the medium and a positivist portrait of man. In addition to her investigations of human nature, she has a taste for pure and strong colors that build space and atmosphere. In Xinyi Cheng’s work, color conveys emotion above all.

It is no coincidence that her first solo exhibition took place at PRACTICE in 2015. This new site in the heart of New York’s Chinatown is representative of the ambition and multiculturalism of the young Chinese diaspora in the United States. After finishing a five-week residency, Xinyi Cheng produced an exhibition that gave pride of place to the male figure. It was entitled Swimming Hole, in reference to an eponymous painting. In swimming holes, nude bathing remains the traditional norm. Out of this fantasy grows an intimist world mostly populated by men. The theme of homosexuality arises delicately, as an undercurrent, simply through contacts or looks between people. Many of these men are the artist’s friends, whom she finds beautiful and attractive as a painter, but not necessarily as a woman. She sometimes asks them to pose, in order to arrange specific situations that occasionally turn out to be absurd or lurid. One of her male models appears recurrently. He is “Thomas,” an artist friend. He first appeared in her paintings in 2012, initially serving as a motif, a painting-development tool. Little by little, he became the painter’s alter-ego. Renouncing the traditional self-portrait, Xinyi Cheng prefers to represent herself through familiar traits that are not her own, choosing those of Thomas. When she pictures herself as a man, she declares that she is able to broaden her imagination completely. These fantasies can be more complex, “shameless,” as she puts it. Her posture has no specific aim, and although one could be tempted to compare it to a feminist current, this would amount to disregarding what she initially sought and still seeks, a way to escape, and especially a way to look through someone else’s eyes. The blond, bearded figure of Thomas, who is situated midway between genders, having both male and female attributes, turns out to be a mask. By wearing it, she offers herself the possibility of erasing the differences between genders and cultures. Through someone else’s perspective, she can indulge in prohibited or strange behavior, as in the painting Fremdschämen, which literally means “to feel embarrassed for somebody else.” The male body fascinates her; it reminds us of the human being in all its animality and its natural needs. In recent works, Xinyi Cheng has endeavored to paint what she considers the most primitive male beauty, through the prism of the barbershop. To her, this is a place that evokes absolute masculinity, as well as precision work and a dangerous situation. When she looks at the barber touching the body of his client, she sees an intimate, almost erotic situation that seems to contradict heterosexual relations between men. 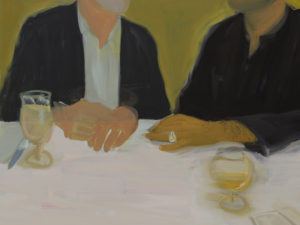 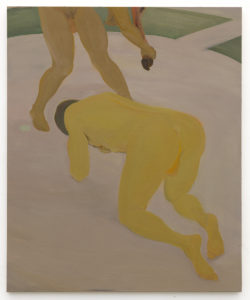 This interest in the human body partly comes from the time she spent training as a sculptor, when she endlessly reproduced flesh and skin, and it comes even more from her inclination to save moments of grace, brief encounters. The cigarette is an ephemeral object that appears frequently in her paintings. She sees this attribute as an object endowed with a sensual aura, like cinema, which caused her to fantasize for decades. In lighting a cigarette, there is also a very intimate charge, a shared moment, similar to seduction and eroticism. Relations of love and exchange materialize in all the details of the bodies and movement. For example in Apéritif, hands supplant faces, and gestures express a lot. Xinyi Cheng explains that these micro-elements tell us enough about the unfolding scene. “Including faces would say too much about it, give too many clues. I’m not afraid of not supplying more information.”

All images
Courtesy: the artist and Balice Hertling, Paris