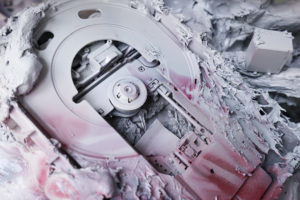 Whether dystopian or utopian, science fiction not only speculates on the effects that technology has on human beings, but it also mirrors the ambivalence of our relationship towards it. Whereas the disenchanted Blade Runner-like cityscapes reflect our concerns related to societal and environmental consequences of technological acceleration, fetishizations of tech-enhanced bodies rather speak to a fascination with the possibility to transcend our biological limits. Yein Lee’s artworks navigate between these two opposites, in a world wherein bodies and their interactions increasingly conflate with technology.

Like many of Lee’s sculptures, I am waking up screaming (2021) is composed of broken computer parts, cables, and carved Styrofoam which are covered in a rough layer of Nutella-textured epoxy putty. It figures a Kafkaesque, beetle-like being that seems to be stuck on its back in an unmade bed. At the core of its spray-painted body, a broken CD reader gapes like an open mouth or an avid eye. Countless legs and antennae point up into the air as if they were frozen in the midst of a waving movement. This snapshot brings to mind what the structural linguist Roman Jakobson called the “phatic function” of language: an expression that only serves to establish or maintain a connection.1 Here, the waving gesture functions similarly to a verbal message such as “Hello, do you hear me?” which precedes the communication of information. It is not yet clear what this tech junk figure wants to convey in its mute address, but a connection is sustained. Perhaps connection as such is what is at stake. In its vulnerable pose, the sculpture testifies to the fragility of communication technology which has become both a condition and the locus for much of human contact and interaction. It embodies a desire for connection in a world of interrupted lines and communication full of glitches. 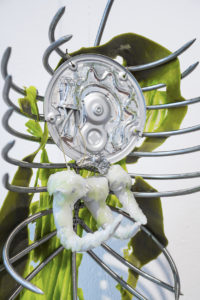 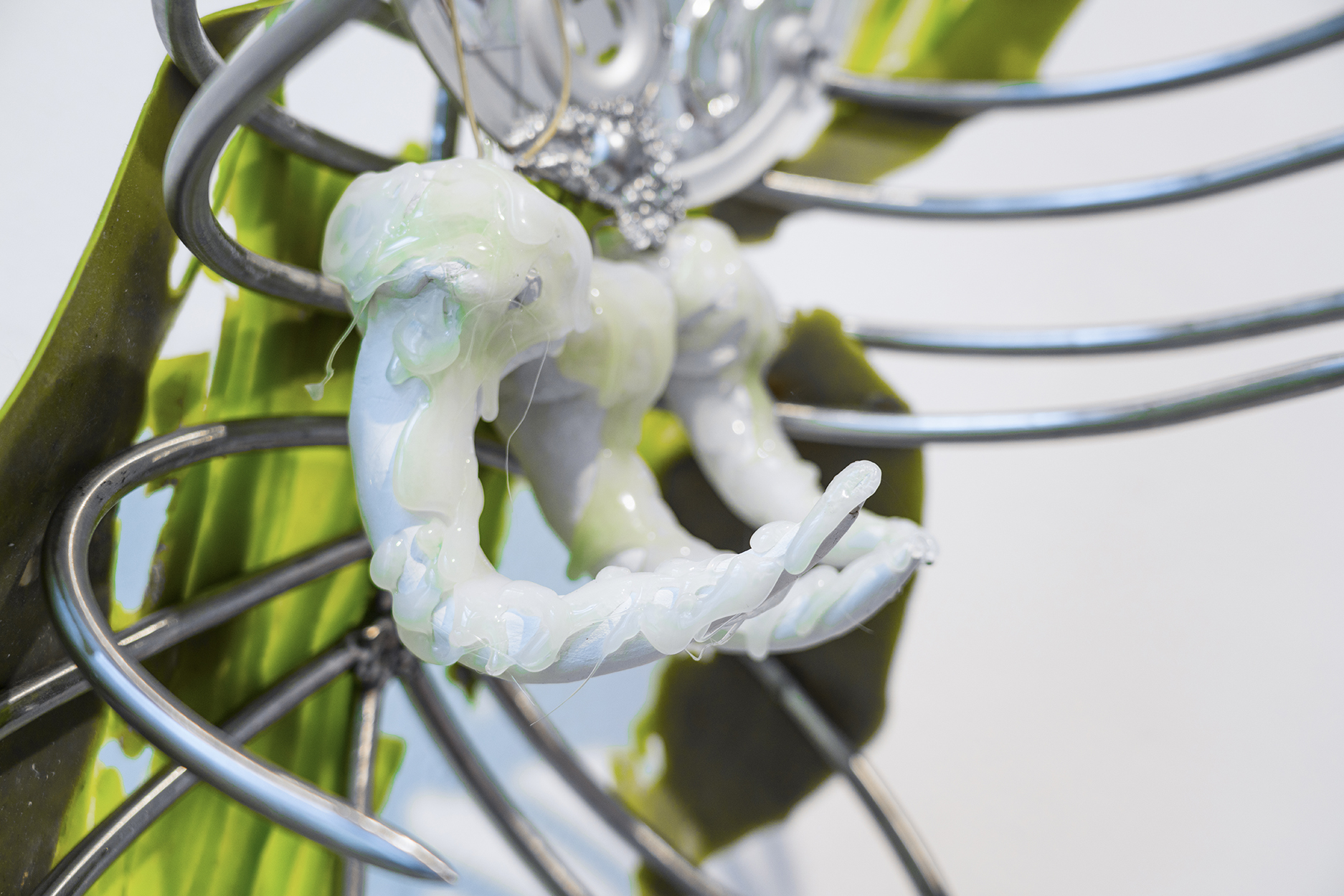 Born in South Korea in 1988, Lee’s fascination for both obsolete and futuristic technology speaks to her teenage years in Seoul, a city in which fast-growing tech industries cater to a seemingly insatiate demand for ever newer products. At this conjunction of technological innovation and hyper-consumerism, still functioning devices are discarded to make room for the next, more advanced model. Against this background, it is not surprising that tech junk is both a privileged material and subject matter in her work. Lee seems to have a particular weakness for wasted communication technology and she mixes it with other objects and materials whose inherent properties also consist in connecting things: cables and adhesive substances like glue and epoxy putty.

In 2015, Lee moved from Seoul to Vienna, from a city in which the present tense is futuristic to a city whose prominent historical architecture, old cafés, and Jugendstil apartments give the impression that time stands still. This displacement did not only mark an abrupt shift from one urban rhythm to another, but it was also a period during which Lee expanded her abstract and gestural paintings towards sculpture. By applying all sorts of junk that was lying around in her studio onto the canvas, she started creating assemblage-like tableaux that grew in the room. In other artworks, like the installation Black leaves in the mouth, dancing the waltz together (2018), Lee experimented with oil stick and acrylic paint on plastic sheets that she later cut out and mounted in a mobile installation. These floating paintings were connected by steel wires and strings of hot glue. The organic and fragile weblike structure is reminiscent of Eva Hesse’s latex-dipped rope-piece No Title, one of the last works Hesse made before her untimely death in 1970. Whereas Hesse was interested in the mutability of shapes that her irregularly knotted rope could take on upon being hung, Lee explores how dripping glue behaves as it freezes into unruly painterly sculptures. The resulting messy entanglement conveys a sense of excess, waste, and transgression of corporeal boundaries: a spectacle of dancing figures that looks like the scent of human body fluids. The smeared or no-longer-dripping substances have a gooeyness to them. Soft, sticky, and slightly sentimental, the scene is as repelling as it is seducing. 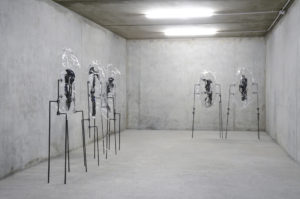 One finds a similar interplay of pulling towards and pushing away in a series of hanging sculptures that Lee showed at Loggia in Vienna, just as the city reopened after the first lockdown in late spring of 2020. Three faceless, bony beings hover in the space, looking as if they were just dredged out of greyish mud. Adorned with orchids, thistles, and spiky quills, these unheard-of species are cute and scary in equal measure. They are clearly sending mixed signals. Like sirens, they are luring us with their beautiful (fake) flowers but, at the same time, warning us that we might get pricked if we come too close. Their titles—I have been calling you, We are not going to drift away, and Gatecrasher is actually quite lovely—allude to situations (some of which we know all too well) of waiting, of fear of falling out of touch and of unexpected encounters. Like vessels of messy emotions, they capture something about what being in relation to others feels like, when intimacy seems to always entail a risk of getting hurt. In light of Covid-19 and imposed distance, the works also bear witness to a troubled longing for proximity when bodies—one’s own and that of others—suddenly became threatening, potentially contagious.

Although Lee’s sculptural creatures capture experiences and emotions that seem utterly human, the human figure is rarely present as such. At the most, it manifests by metonymy as body liquids or in prosthetic forms. In Rejuvenate Body Order Now, a solo show held at the artist-run space Le Box in Toulouse in early 2021, the human body appears fragmented, recognizable in prostheses made of 3D-printed skeleton parts and tech waste. Encapsulated in egg-shaped plastic membranes—as if they were still-growing organs or commodities wrapped in cellophane—five metallic black prostheses are displayed in a way that suggests that they can be ordered at the kiosk display and mounted to the body. Loosely hanging wires and cables are just waiting to be connected to organic veins and nerves. Were prostheses traditionally conceived to replace missing limbs, the detachable body parts in Lee’s sculptures play with the possibility to modify, rejuvenate, and enhance one’s body with technological extensions. As such, they become figurations of a shifting conception of the body as a permeable and open system, where biological boundaries are pushed by prosthetic augmentation.

Like science fiction speculation, the exhibition dwells on a (soon real?) transhuman condition in which self-reparation or self-enhancement is only a matter of mechanical engineering. Still, it is clearly not only about improving the body’s functional capacities. The silver piercing on the hipbone or the handless arms—which look like cyberpunk weapons—flirt with the idea of prostheses as ornamental accessories. However, this emancipatory promise of cyborg-like self-modification seems overturned as the plug-on prostheses turn into merchandise. With its suspicious and triggering wording, the exhibition title—which reads like spam mail—mimics the imperatives of self-optimization industries. Playing on our fear of never being good enough or of aging (and ultimately dying), they impel us to respond to their offers. Lee explores how the transhuman body is entangled in a neoliberal logic in which we would have to pay for our bodies to manage our human capital (even more than we already do). Instead of liberating us from constraining categories, the dream of bodily enhancement has been caught up in a sticky web of market interests that ultimately places the subject in the role of a consumer.

In forms shaped by intuitive and painterly gestures, Lee’s sculptures present us with multiple figurations of the body: technology-as-body, body liquids without a body (a body freed of boundaries?), bodies of longing, and the tech-enhanced body. Shapeshifting and ambivalent, technology manifests as a fragile creature always on the verge of becoming obsolete, as a vector for transhumanist visions, as devices inscribed in neoliberal consumer culture, or as a condition for connection. What permeates through many of her sculptures—be it creaturelike vessels or prosthetic forms—are the desires and anxieties related to living intertwined with technology. 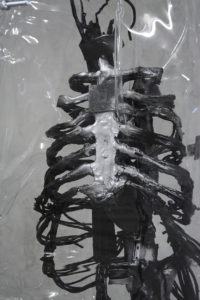 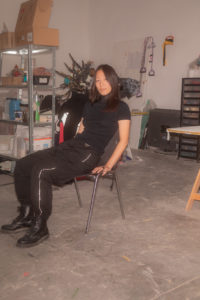 Cover image: I am waking up screaming, 2021
Portrait by Neven Allgeier

YEIN LEE
(b. 1988, South Korea) lives and works in Vienna. Her practice combines elements of technology, physical organisms and fantastic conceptions to create hybrid visions of the bodily realm. Investigating relations of social dissonance in her extended surroundings, found objects are combined with casted pieces and painterly gestural liveness.

JOHANNA THORELL
is an independent curator, writer and editor based in Vienna. She studied Philosophy at Paris 1 Panthéon-Sorbonne and Universität Wien. Recent exhibition projects include Cartography of Memory (Pina, 2019), Failure to Function (VBKÖ, 2020), Haus 2020 and Haus 2021, all in Vienna. She is currently working with choreographer Anne Juren on a publication entitled Studies on Fantasmical Anatomies.