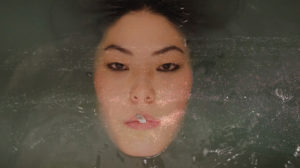 With a wide vocabulary drawn from pop culture, fashion, science fiction, and ancient religions, she creates multisensory processions through time and space. Born and raised in Vancouver, Canada, and now based in London, UK, Xa’s practice is informed by her experiences within the Asian diasporas. She counts as her influencers a diverse set of thinkers (bell hooks, Edward Said, Homi K. Bhabha, Trinh T. Minh-ha, Donna Haraway) writers (Ursula K. Le Guin, Toni Morrison, Nikki Giovanni, Patrick Rothfuss), experts on ancient Korean religions (Dr. Helen Hye-Sook Hwang, Dr. Laurel Kendall), filmmakers (Park Chan-Kyong) and musicians (Del The Funky Homosapien, GZA). Sometimes, Xa’s work features the protagonist Yung Yoomi, an alter ego for the artist (Yoo-Mi is her Korean name; “Yung,” a nod to a popular rappers’ prefix, was added around 2010). Exploring her Korean background—familial, cultural, spiritual—through her work is a process of continual becoming, with fantastical narratives bridging worlds and distances.
Costuming and textiles factor prominently in Xa’s work, embodying the patching, constructing, and self-mythologizing of her practice. Robes, shawls and jackets—articles for protection, ceremony, warmth and power—burst with colorful detailing, brightly dyed synthetic hair, and geometric camouflage. Elements from her evolving personal iconography, including fire, fans, flames, seashells, knives, and monolid eyes adorn and animate. Numbers appear in the block lettering of sport uniforms, and in some pieces a “G” insignia appears. Like many details in Xa’s work the letter is at once easily recognizable (a familiar style of cultural branding) and something she has coded through associations; here it stands for “Ganggangsullae,” a traditional Korean dance performed by women and associated with ritual, harvest, and communal strength. 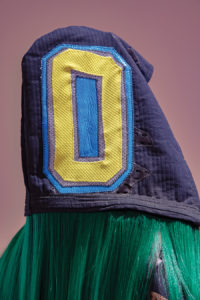 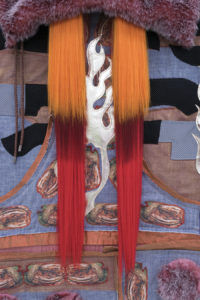 In Xa’s practice symbols act like vessels, carriers that can be continually emptied and refilled, some more easily than others. Recently, the conch shell has frequently appeared in her work; the artist became fixated on it when she travelled to Jeju Island, South Korea, in 2017. There, hundreds of conch shells litter the beaches, left by female divers known as haeyneo, continuing a cultural tradition and economic activity that is hundreds of years old. The shell represents home (a literal shelter, a place of belonging), but also a void, and a vastness, from which life and power can emerge. “The sea has many secrets…”

The yin yang also repeats in Xa’s work, and she recognized the duality of this symbol from a young age. On the one hand, it is used as an emblem of authentic “Asian-ness” in Korean and Chinese spaces (like her uncle’s tae kwon do gym); on the other it is used as a generic symbol of balance in skateboard and hippie culture, seemingly innocuous but signaling the Western capitalist consumption of the “East.” To Xa, this duplicity captures the slipperiness of her own Asian identity, while using such a prolific symbol builds in different shorthand impressions for different audiences. Most recently, Xa has replaced the yin yang with the Taegeuk, the central symbol on the south Korean flag, but it has proven more perplexing and resistant, a symbol of nationalism and essentialism which contradicts Xa’s conviction of a personal Korean identity rooted in her own authentic experience.1

Xa often collaborates with musicians, and percussionist Jihye Kim has featured prominently in several performances, including Flooded with ICE / Hell Fire Can’t Scorch Me (2018), Iridezcent Interludez (2018), and Perfumed Purple Rice and Sateen Songs for Sadie (2017). Kim’s inspired drumming, in turns subtle and frenetically wild, acts as a pulsing corollary to Xa’s tempered voice. Flooded with ICE / Hell Fire Can’t Scorch Me takes place in the year 3030, when the world “blew up in 10,000 atomic fireballs” which destroyed most of what was living on land. Two dancers animate the narrative on stage, with movements that appear part human, part animal and part machine. In addition to Kim’s drumming, the sonic landscape includes birdcalls, iPhone sound effects, and heavy breathing. The performance speaks to the anxiety of impending environmental destruction, but also the smoldering pulse of life, the perpetual rhythms of destruction and formation.

Xa uses the transporting qualities of sound to full effect in A Sojourn Through Saturn and Across the Southern Sea (2018), an audio work produced by Cold Protein. Listeners are meant to start the 31-minute track as they enter Covent Garden Tube Station, and it offers a surreal backdrop to the physical experience of moving below the earth’s surface. Combining narration in a deep, computer-altered voice, with traditional Korean percussions and animal growling, chirping, croaking, a story develops along with an ecosystem, augmented by the thundering, hissing, and chatter of the crowded underground.

In 2019, Xa is producing two new performance pieces, for the program Meetings on Art at the Venice Biennale and for Art Night London, which build off of Linguistic Legacies and Lunar Exploration, first performed at Serpentine Gallery in 2016. The Venice piece, Grandmother Mago, is comprised of four dancers and one traditional Korean drummer, all wearing new costumes and masks. The Art Night project, Child of Magohalmi and the Echos of Creation, is a multimedia installation in the historic reading room of Walthamstow Library. Visitors are invited to enter an immersive deep-water environment, with spoken word, sonic interludes, and impromptu dance and music performances throughout the night. The through-line of these pieces is an origin story, loosely inspired by female-centric Korean folklore and creation myths, and the passing down of ancestral knowledge through matrilineal social structures. 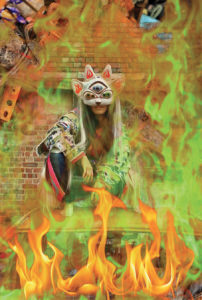 Flooded with ICE/Hellfire Can’t Scorch Me, 2018 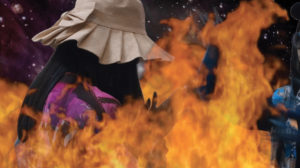 These performances are the basis for Xa’s upcoming solo exhibitions at Yarat Contemporary Art Space in Baku, Azerbaijan; Tramway in Glasgow, Scotland; and De La Warr Pavillion in Bexhill on Sea, UK. Xa conceives exhibitions through a lens of theatricality and storytelling, imagining the gallery space as a stage or series of sets, encountered and experienced in time and three dimensions. For Xa, the gallery can present worlds to be entered, not simply objects to be looked at. Sound and moving image are animate elements that play an important role in this, filling the space with light and waves, flowing everything together.
The most striking aspect of Xa’s narratives is the way that they stretch temporally, from the mythological past to distant millennia. It is as if the present is a large tangled knot, under a constant, gentle tension as the string is pulled and loosened from either end. Objects, ideas and gestures lose and gain context, associations, and power, folding in ways that start to feel multi- (or inter-, or extra-?) dimensional. Dazzling, nimble, vibrant and at times chaotic, Xa’s work feels like a celebration of eternity, of the endless permutations of meaning and identity that course through every moment, in every being and body.

References to Xa’s personal reflections and upcoming projects are drawn from email correspondence between the artist and the author in April 2019.

ZADIE XA (b. 1983, Vancouver, Canada) is an artist based in London. She uses live performance, video, painting and textiles to question how cultures inform identities and notions of self. Xa’s recent and upcoming projects include performances at the 2019 Venice Biennale and Art Night London, and solo exhibitions at Yarat Contemporary Art Space, Baku, Azerbaijan; Tramway, Glasgow; and De La Warr Pavilion, Bexhill on Sea, UK.