Scheme for a Future Program

With GRAND OPENING (Summer Rhapsody) KURA. opens in Milan and launches the exhibition program directed by CURA. in the historic premises of Fonderia Artistica Battaglia.

KURA. is born from a misspelling of our magazine’s name. The pronunciation is the same, but the K represents the glitch, the element of novelty that bases its roots in the very idea of “spazio okkupato” (occupied space), that is also associated with the k in kunsthalle, without necessarily being one. It is the physical space and extension of CURA. which joins the programming of exhibitions already curated by Andrea Baccin and Ilaria Marotta, founding directors of the magazine, held in the premises of BASEMENT ROMA.

Movement, the alternation of empty and full, but also role improvisations aim at creating the rhythm of the exhibition experience of this new space. An experience that, although protracted in its assumptions, will be called to define itself over time.

According to David Reinfurt, the eclectic co-founder (together with Stuart Bailey) of Dexter Sinister and creator of the visual identity of the project, the “scheme for a future program” is summarized “in that small alteration, involving a few strokes, between a C and a K” which defines the open nature of the logo, still far from a finished form.

With KURA. in Milan, the CURA. team, together with a board of artists and curators which include the aforementioned David Reinfurt, Lorenzo Benedetti (Kunstmuseum St. Gallen), Luís Silva and João Mourão (Kunsthalle Lissabon), Samuel Leuenberger (SALTS Birsfelden), Anthony Huberman (CCA Wattis Institute), aims at alternating solo and group exhibitions of artists mostly belonging to the generation born in the early ’80s, who came to the fore on the international scene and had a leading role in a new layout of the contemporary scene. 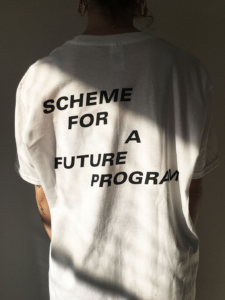 “The relationship with the foundry and its premises will be significant but not decisive in defining the works or use of the materials. It will be a fluid collaboration, involving roles and spaces, in which everyone will be able to draw the best from the experience and skills of the other.”

Swaying between reality and fiction, between social ritual and mise en scène, GRAND OPENING (Summer Rhapsody) embodies, and at the same time activates, the celebrations of the opening of the place, serving as a prelude to something new, a free and varied orchestration of actions, bodies, shapes and sounds, which take on the popular traits of a great street party.

Image Credit:
SCHEME FOR A FUTURE PROGRAM
by David Reinfurt