L’Isola dei Baci [The Island of Kisses] is the title of a short social-erotic novel written by Filippo Tommaso Marinetti in 1918 and set on the island of Capri around a group of wealthy adventurers, cultured homosexuals and self-styled ideals of beauty and misogyny, combining a spirit of apparent lightness with a sense of premonitory disquiet, almost announcing the reactionary culture that would lead Italy to a radical stance against the so-called ‘perverted,’ during the fascist period. The book, according to Bruno Corrà who wrote its preface, also reflects “a profound interest in life,” its ambiguities, and the sometimes bitter, sometimes lyrical implications of an Italy far back in time. 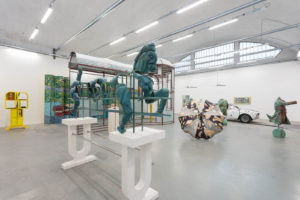 Than Hussein Clark (born in 1981, lives and works in London), a curious and passionate artist with a passion for old books, a deep connoisseur of theater and the history of manners, starts from here, from this literary incipit that stages a much wider arrangement of references, perspectives and scenes that take place in unison, without any philological, space-time or historical censorship.

The time of the representation becomes a syncopated time, quoting the classical Renaissance layout in which consecutive actions were shown in a linear sequence, but also to a certain movie-inspired approach in which the sense of reality gives way to the space-temporal construction of the film. Here, the different frames refer to different and historically distant situations, and draw on the nonchalance of the artist’s unique gaze which involves literary and cinema-related but also historical, artistic and obviously autobiographical references. 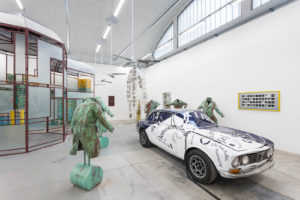 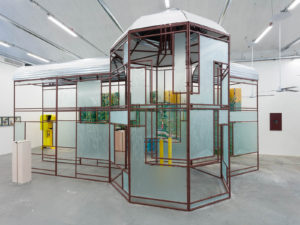 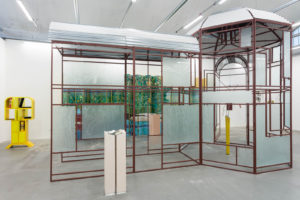 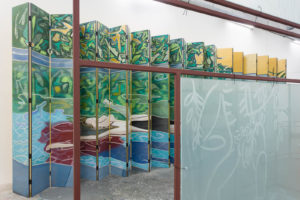 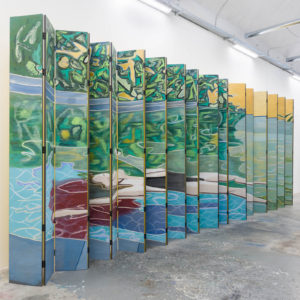 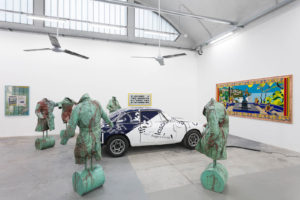 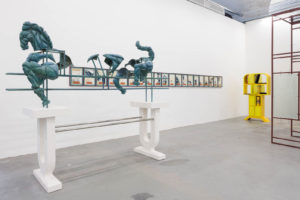 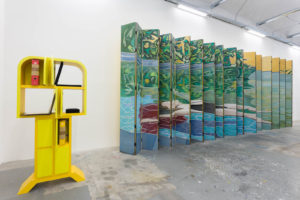 Thus Capri immediately finds its double in the (time-wise and geographically) more distant Taprobane Island in Sri Lanka: the Mediterranean climate translates into tropical contaminations, threatening characters that inhabit the scene mingle with the faces familiar to the artist, a canopy inspired by the dwelling of the Count de Mauny in Sri Lanka echoes a newly designed Depero-inspired tapestry; threatening blades looming just above the viewers’ heads create a climate of anguishing expectation and watchful participation.

The persecutions that anticipated and followed the racial laws of ’38 in Italy, with hundreds of homosexuals exiled at the behest of the Duce in the islands of Ustica, Ventotene, Favignana (G. Goretti, T. Giartosio, La città e l’Isola, Omosessuali al confino nell’Italia Fascista, Donzelli Ed. 2006), would only be one of the consequences of the cultural climate to which the artist takes us back, mixing different styles, languages and references. At times something seems to have already happened, while at other times different events are about to happen. One not only looks at the homophobic idiosyncrasies of the Futurists and of Marinetti himself, but also at a certain ‘macho’ propaganda which, in an outbreak of intolerance, appears not so far in our day, many decades after.

A wide range of works, the result of a completely new production involving marquetry, bronze and gold craftsmanship, combines fascination and mystery, curiosity and archive, specific references to the city of Milan, with reinterpretations, literary quotations (the verses of Ada Negri that cover the Alfa Romeo GTV 2000) and denunciation movies (The Conformist, by Bernardo Bertolucci), finally ending with historical and tragic events, such as the murder of Pier Paolo Pasolini.

The exhibition will be complemented by a text by Rachele Ferrario.

Than Hussein Clark in conversation with Catherine David at KURA. – Milan June 20th, 2019

All images: Courtesy the artist and VI VII Oslo
Photos by Mark Blower