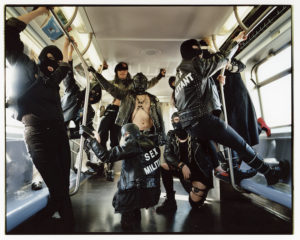 Surrealism and sex are inextricably linked. The movement emerged alongside and reflected the concepts of the unconscious and repression at the heart of Sigmund Freud’s thinking. They were drawn to creating work that accessed hidden desires and incongruous connections. Sex Militant are perhaps carrying the banner for their subversive and progressive take on sex to another level. The anonymous collective describe themselves as “a conviction, an action and a coalition,” and are creating a fascinating space for creative expression that is a fusion of art and activism.

Artist Jex Blackmore has become the spokesperson for the group. Engaged in protest and organization from a young age, she already was well known for her earlier interest in Satanic Temple, something she has since moved away from. In a way her work strongly reflects her own background—her father was a funeral director, her mother a social worker and choir instructor. Blackmore studied art at the University of Michigan and Harvard. “I grew up also in the theater, so I studied vocal performance and opera in college, and art history too.” Increasingly she became interested in challenging and provoking structures of power, and how to transform these for people who have relatively little to no resources. “I started to design performances in civic spaces. I realized that we could manipulate and use spectacle not only to garner attention, of course, but also to redistribute power and influence as well as particular narratives of interests. I found it to be an extremely empowering experience as a way of developing community on a level that I had not ever experienced anywhere.” Blackmore’s works were extreme, violent and very public—including filming skinning a hog on a public street viewed through a big screen projection. “The idea is that the horrors and mundane realities of life both filtered through this virtual experience change not only the way we view ourselves but the way we view other people.” 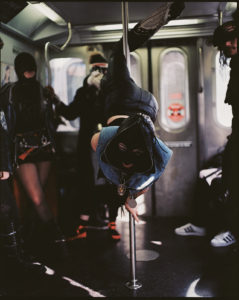 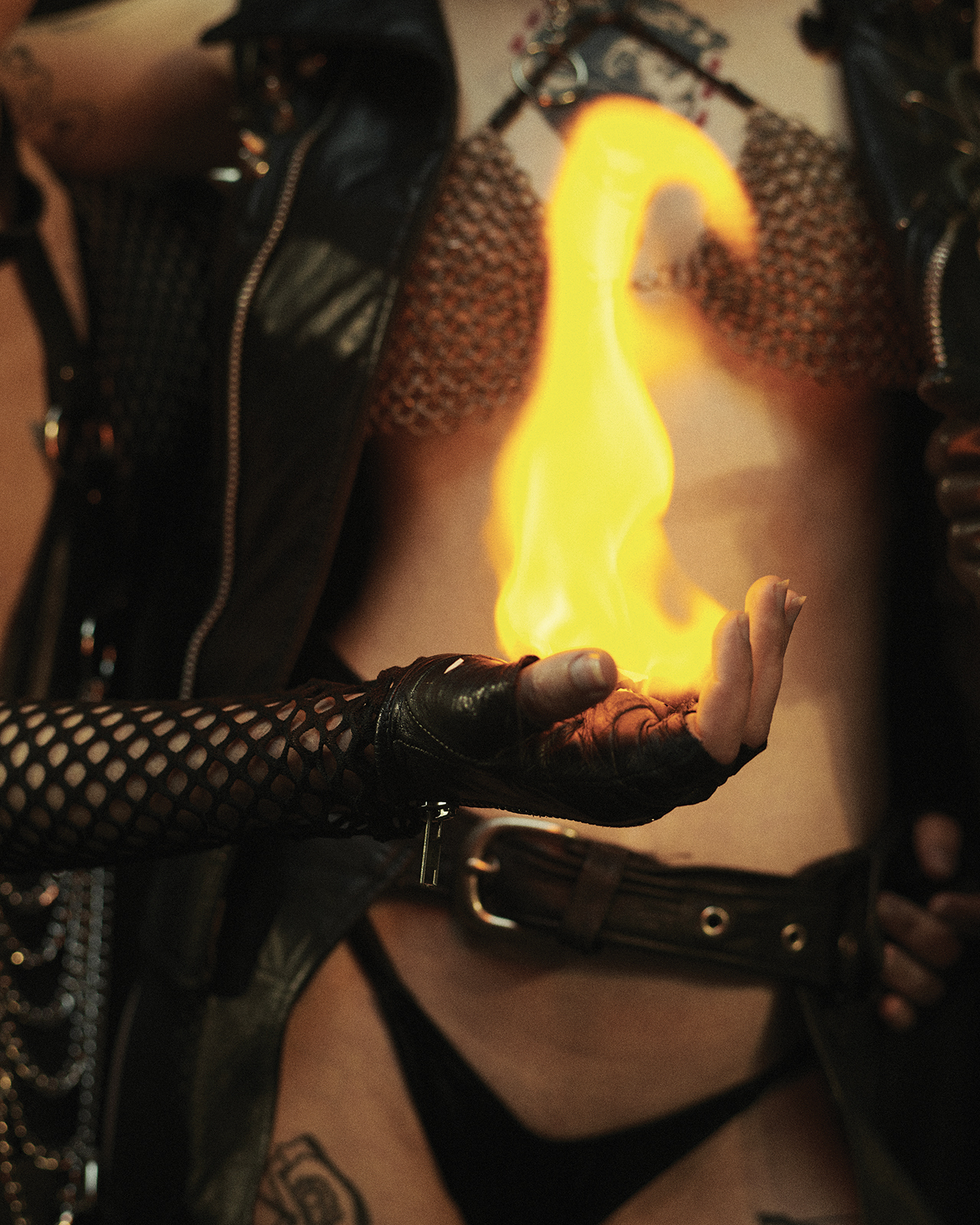 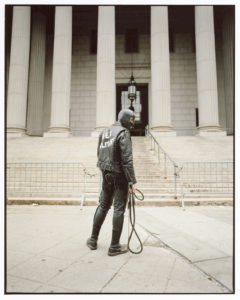 A focus on sexual liberation grew out of this experience, as well as Blackmore’s own experience of Christianity. “I had experiences in a church where sexual oppression and repression were some of the keystones of shame that I experienced and I saw others experience,” she points out. “Shame is the cornerstone not only of the Christian faith and several other mainstream religions but also forms the undercurrent of our modern society and our government. Certain values regarding the binary rules that exist in society for men, women, and families and our sexuality are also being co-opted by media culture.”

The collective’s work is very much based in collective action and emerges from performance art, a medium that provides particularly direct ways of looking at social realities. How identity functions in the context of social media and a contemporary context is important. Some of its approach emerged from the punk and metal scenes, subcultures with a strong sense of resistance and self-organization, influenced by the work of bands like Crass. Projects on the scene included food drives, anarchist libraries, and of course exhibitions. Blackmore is not Sex Militant’s leader. It is very much a group organization with a focus on community and pooling resources. The anonymity of those taking part has a practical dimension. “There’s a lot of power in being anonymous as well as safety,” Blackmore notes. She had already been outed by the press in the past as a radical person and had her life publicly threatened as a result. “I am in a better position to receive that or to bear the burden of that. It also allows other people to protect themselves and participate in a way that is safer for them.”

The group met for a year, drafting the manifesto which is now on their website. They wanted to ensure that they had very strong, clear stated values in order to glue the concept together. Sex Militant’s beliefs are rooting strongly in the emotional as much as the political. “Sexuality includes sex, gender identities and roles, sexual orientation, eroticism, pleasure, intimacy, and reproduction. The free expression of sexuality is critical to our physical, emotional, and social well-being. Each human being is entitled to full bodily autonomy and integrity so that they may exercise their sexuality free from discrimination, coercion, and violence,” they write. Like the Surrealists and Lettrists, their work strongly resists the dominance and interrelationship of church and state. As they point out, “Without secularism, sexual justice is not possible.” Here all conceptions of morality are up for grabs—purity culture and virginity as a social structure, heteronormative sexuality and the validity of sex work. Their pillars are also a direct response to some of the right wing agenda of American politics in particular, for example around the forced-birth agenda and gender rights. They are clear that “the sexual rights of all persons must be protected, respected, and fulfilled.” 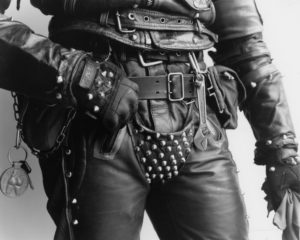 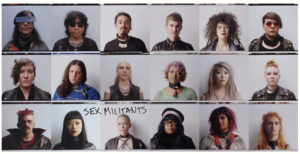 Sex Militant is based in Blackmore’s native Detroit, Michigan. The current political freedom and sense of experimentation in the city is partly why Sex Militant has grown. “It’s a very politically engaged city,” Blackmore points out. It’s heritage of revolutionary struggle, politics, bankruptcy, protest, of inequality and post-Fordist decay. The fall of the American Dream, failure of industry and creation of alternative modes of things are based here. “There’s this tension. We’ve done this before and there’s an opportunity to create new models of living in the city. That is very much at a friction point between organizers and activists, and people in our local government.”

Although activism is at the heart of the group, art is also a fundamental space where they can express these ideas. Part of this reflects an awareness of how visual culture and narratives are disseminated in a media-driven culture. Today, ideas are consumed as images. “It’s much easier for somebody to look at an image or to interact with a piece of art than it is to sit down and read an essay, especially when you have an interest in reaching people at multiple different access points,” Blackmore explains. “Art cannot only quickly communicate a value or inspire a type of feeling, it’s also an amazing way of fleshing out the unspoken meaning or truth behind the work.” Sex Militant are very much following in the footsteps of collectives like Act Up, who emerged in the 1980s in response to the AIDS pandemic. “Using a visual aesthetic is critical, especially if you don’t have the power of a huge PR campaign or the resources to communicate to a mass audience.”

The group was, understandably, more publicly active before the Covid-19 pandemic. One of their central projects was a photo essay of involved sexual activists and collaborators, a huge creative production. Contributors in head-to-toe bondage gear would pose and crack bullwhips outside of Supreme Court buildings across the United States. The bondage aesthetic was a way of communicating submission and empowerment at the same time. “There’s a lot of tension and freedom that come with the concept of bondage,” Blackmore explains. “It’s like a confrontation of power dynamics that exist culturally, politically and socially, but repurposing them and translating them as a form of aggression against those same structures.” Other public interventions are not legal, and less able to be discussed. They had created a number of ongoing banner drops and props, processions, music performances, and an on and offline talks program. “It’s hyper localized. It’s not something that we take credit for but occasionally gets in media. It feels empowering to engage in that capacity. Sex Militant has been a space of internal empowerment rather than a space of direct conflict.”

There is an intimacy to their work. Gun training workshop for sex workers. Performances by exotic dancers in public spaces to raise funds for a stripper-run collectively-owned strip club and union. Since Covid, the community has been focusing on caring for each other. “Activists are just constantly under so much stress, they are overworked and often sacrificed so much. It is not a sustainable model.” Actions have included meditative self-worship rituals. The first was in their exhibition in Chicago’s Co-prosperity Sphere, which was surprisingly protested by members of the Catholic church. “It seemed like something that was quite restorative and healthy and its private nature very much not an aggressive action. The fact that the Catholic Church came and was very upset underscores the need for this kind of self-healing community-building sessions for activists and people who are impacted by sexual, oppressive sexual legislation and societal norms.”

The group are still aware of the limitations of an art context, at the same time as understanding the opportunities it offers that they perhaps would not have elsewhere. “The art world is kind of this absurdist charade. It involves a lot of wealth and power, and you often are juxtaposing that against artists who are criticizing those structures but also rely on them to survive,” Blackmore explains. “But I do think that there’s something very important about making art that challenges those structures in a way that makes the people who participate in them very uncomfortable. I do think that just discomfort is one of the most powerful tools that we have to challenge people’s established beliefs.” 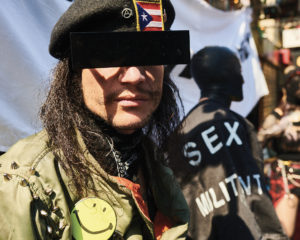 SEX MILITANT
is a project founded by Jex Blackmore and developed by a collective of artists and activists committed to sexual revolution and liberation through performance, advocacy, and direct action. To be Sex Militant is to be fiercely committed to the advancement of sexual and reproductive liberation. Sex Militants are networked for action and empowered to shamelessly advocate for the protection, respect, and fulfillment of sexual rights for all people.

FRANCESCA GAVIN
is a curator and writer based between London and Vienna. She was the co-curator of the Historical Exhibition of Manifesta11 and has written eight books including Watch This Space, 100 New Artists and Hell Bound: New Gothic Art. She has a monthly art and music radio show, Rough Version, on NTS Radio.